Not Even Five Days Later... 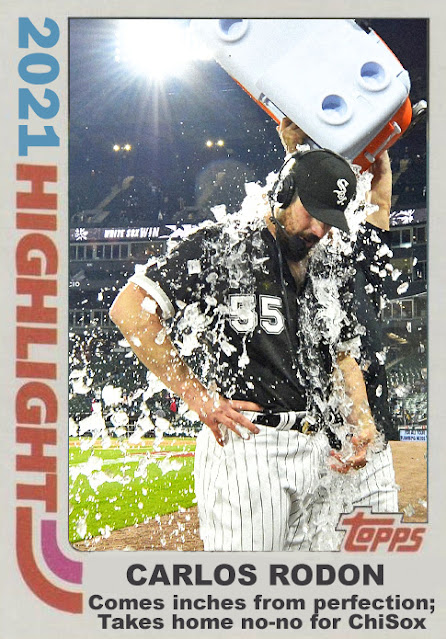 Man, when I made up this 82 Highlight template last week, I did not think I would need it so frequently.

Five days after Joe Musgrove's no-hitter in Arlington, Carlos Rodon was flirting with perfection into the ninth in Chicago. I was following this for a couple innings, and I was genuinely dumbfounded with what was going on. As I've discussed, in my house when a no-no is in the works, I use the code 'not saying anything, name of the player, team, inning'. Last night I had to make a new code, because Rodon hadn't allowed any baserunners either. So I had to go 'Carlos Rodon, 7th inning, White Sox, extra cheese.'

I hadn't even introduced 'extra cheese' as a concept before last night and my dad instantly knew what was going on.

Of course, thanks to a HBP in the ninth, which was heartbreaking as pretty much everyone was watching, it wasn't perfect. But Rodon was able to finish off the last few Cleveland Indians with the strikeouts he had waited until late in the game to truly employ, and after Jordan Luplow ended it with an easy line drive to Moncada, it was over.

We're two weeks into the season, and we've had two no-hitters. This is a trend I am surprisingly okay with.

Plus, unlike last week's, Carlos Rodon is a slightly-less obvious pick for one. It wasn't clear if Rodon would even make the team this year, as he's been injury-prone and unreliable in the last few seasons, and I was worried he'd fail again given a rotation opportunity. But, Rodon had a masterful start behind the powerful White Sox lineup, and he re-legitimized himself in the eyes of White Sox fans. I'm glad it happened to him.

I'm not sure how long we'll have to wait until the next one. Maybe another 5 days? Maybe a month or so? But considering the rate of pitchers throwing fire into the 7th lately, it might honestly be pretty soon.