As we approach the halfway point of the set, and continue to knock off the players Topps should have depicted in last year's flagship sets, we're still covering a lot of ground, a lot of veterans from the 2010s who were still kicking around last year, and a lot of interesting rookies who are already killing it this year. These next 9 fall into a few of those categories. 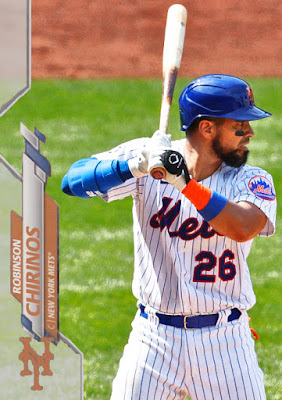 Card #154- Robinson Chirinos, New York Mets
After a pair of impressive seasons catching for Texas-area teams, Robinson Chirinos returned to Arlington last year to compete for a starting catching gig that would eventually go to Jose Trevino. After injuries ruined Chirinos' attempt, he was dealt to Queens with Todd Frazier to help their supposed playoff push. In 12 games, Chirinos hit .219 with 5 RBIs, and mostly deferred to the disappointing performance from Wilson Ramos. Chirinos fought to make the Yankees out of camp but came short. 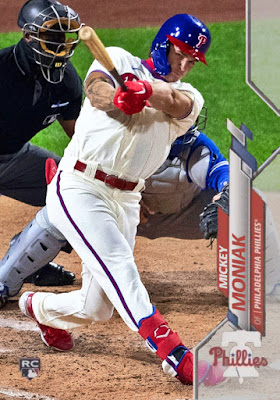 Card #155- Mickey Moniak, Philadelphia Phillies
One of the Phillies' most prized prospects of the last few years, and a former #1 overall pick, Mickey Moniak had struggled to hit for power despite his monster high school numbers. Last year, the 22-year-old finally made it to the bigs, overshadowed slightly by fellow prospect Alec Bohm. Moniak didn't have any RBIs in his 8 game call-up, and only hit .214 with 3 hits. Moniak is currently up with the Phillies, and looks to make a larger impact following better power numbers in Spring Training. 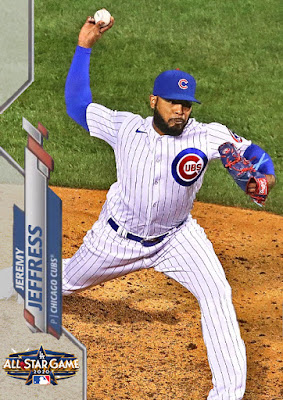 Card #156- Jeremy Jeffress ASG, Chicago Cubs
One of two proposed 2020 ASG cards in this set for players who did not make the flagship Topps sets, Jeremy Jeffress was far and away one of the best relievers of 2020, and was a fantastic ninth inning asset for the Cubs last year, so clearly Dave Martinez would have chosen him for a supposed ASG roster. Heck, he tried choosing him as a National, though that didn't end as well. 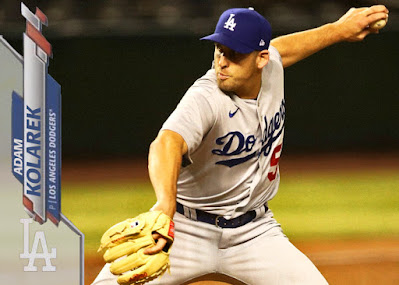 Card #157- Adam Kolarek, Los Angeles Dodgers
It honestly baffles me that Adam Kolarek didn't get a 2020 Topps card after his MONSTER 2019 second half. Plucked from the Rays in 2019, Kolarek quickly became one of the most ferocious relievers in LA, only allowing 1 earned run throughout all of his 2019 Dodgers games. 2020 was a similar year for Kolarek, only allowing 2 earned runs in 20 games, and being a lights-out star in the World Series. Unfortunately, Kolarek's low-run mojo seems to be limited to LA, as he's struggled mightily in his first few games with the A's. 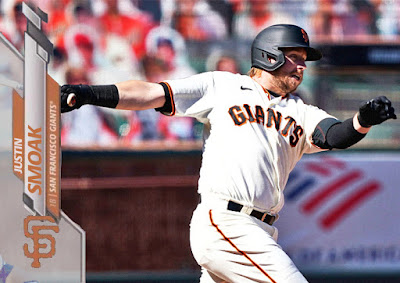 Card #158- Justin Smoak, San Francisco Giants
Justin Smoak was signed by the Brewers in an attempt to continue the Blue Jays veteran's reign of dominance on the 1st base position. Unfortunately, Smoak's one-dimensional numbers were more of a nuisance for Milwaukee, and he was released in September. Then the Giants rolled the dice, and picked up Smoak for what became a 3-game run. Smoak never got on base in 6 plate appearances. So away he went again. 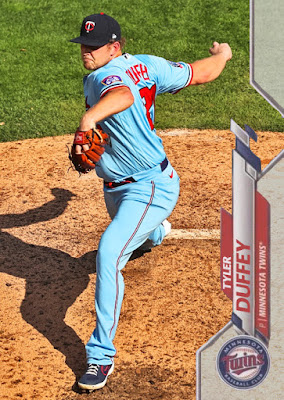 Card #159- Tyler Duffey, Minnesota Twins
One of the duo of Duffey & May that has been a consistently breezy Minnesota bullpen presence, Tyler Duffey had an exceptionally strong season, despite it only lasting 22 games. Duffey had a 1.88 ERA with 31 Ks in 24 innings, which helped the Twins sneak into the postseason last year. Duffey is being used in a similar setup role this year, though without the help of Trevor May. 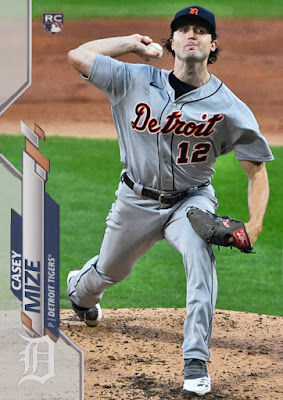 Card #160- Casey Mize, Detroit Tigers
Arguably one of the biggest rookie prospects of the last few years, Casey Mize finally made it to the majors in 2020, and Tigers fans were ready to see the #1 pick dominate right off the bat. That did not happen. In 7 starts, the 23-year old posted a 6.99 ERA with only one more strikeout than runs allowed. I figure you just chalk it up to early-appearance yips, because in his sophomore season, Mize is already pitching a ton better and with less earned runs. 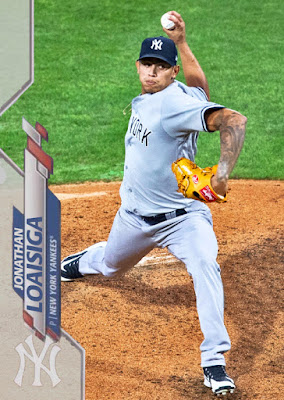 Card #161- Jonathan Loaisiga, New York Yankees
It seems that, as of 2021, the Yankees have finally figured out what to do with Jonathan Loaisiga. For a while they split him between the rotation and the bullpen, and last year he made three starts, but they're looking like they're gonna keep him in the 'pen this year. Which is a relief, as that's where Loaisiga did best last year, with a 3.68 ERA and 13 Ks. Hopefully Loiasiga can bridge the gap between the departed Adam Ottavino and the injured Zack Britton for a bit. 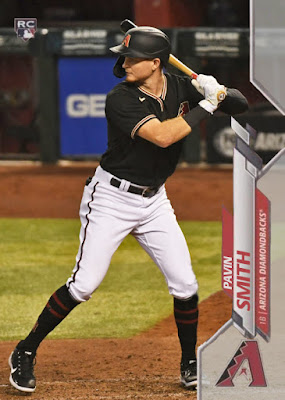 Card #162- Pavin Smith, Arizona Diamondbacks
In the last few weeks of MLB play in 2020, the struggling Arizona Diamondbacks promoted prospect Pavin Smith to the bigs. A former 7th overall pick, Pavin had been an heir-apparent type for the D-Backs for a while, and in the first 12 games of his MLB career, he hit .270 with 10 hits and 4 RBIs. Already he's been thrust into a starting outfield role for the D-Backs, and is already one of the more consistent young performers on the 2021 squad.
The next 9 cards in this set will go up on Monday. A few very interesting cases, and a few people already struggling in 2021.
Posted by Jordan at 7:36 PM
Labels: 2020 Topps Final Edition, Adam Kolarek, Casey Mize, D-Backs, Dodgers, Jeremy Jeffress, Justin Smoak, Mets, Mickey Moniak, Pavin Smith, Phillies, Robinson Chirinos, Tigers, Twins, Tyler Duffey, Yankees