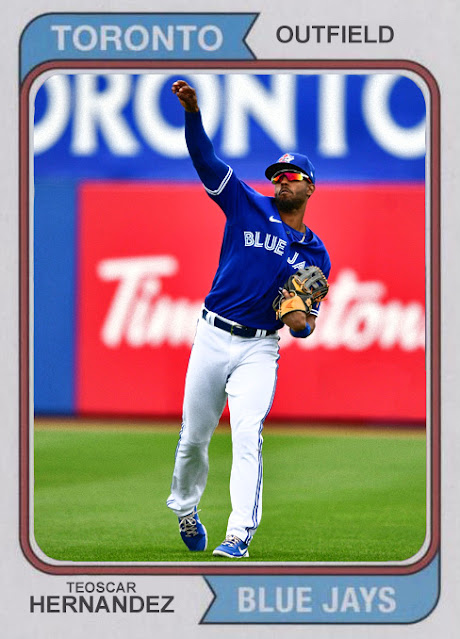 2021. The year Florida had three teams. Look, I'm no doctor, but shouldn't we be careful about rewarding Florida for their disastrously high COVID cases by giving them another baseball team? Not that New York is a wasteland by comparison.

But the Toronto Blue Jays have moved from the ferocious landscape of Buffalo, New York, to the comparatively idyllic and peaceful domain of Dunedin, Florida. There aren't a lot of known sights and places to be in Dunedin. Upon googling the town, visitors will be directed to something called 'Live Webcam Honeymoon Island' within the first three results. It is known for its beaches, its proximity to Sarasota and Clearwater, and its abundance of, for lack of a value judgment, Floridians.

At any rate, the Dunedin landscape gives AL East opponents the opportunity to play in beautiful Floridian weather without having it blocked by an ugly-ass dome in Tampa. It's also different from Buffalo, New York, in that it's a different type of terrible. Buffalo terrible and Florida terrible are different types of terrible- nobody wants to go to Buffalo in January, but people will stomach the southern-fried drug haze of Florida in order to take their kids on Space Mountain. There are no theme park rides in Buffalo, unless you count the escalator into Bills Stadium.

Dunedin is also home to one of the scariest obstacles of any Toronto Blue Jays player- retired Yankee fans. What, Rays home games not worth the struggle? That's okay, there's plenty of room to cheer on Aaron Judge and friends in a friendly minor league/spring training stadium meant for a team used to playing in a converted soccer stadium with a hotel on the side. There will be more Yankee fans at Jays home games than Jays fans, solely because I know of no Canadian in their right minds who would want to camp out in Florida for six months solely for sports. There's plenty of sports at home, to paraphrase Rob Ford.

But visiting fans to Dunedin will be able to see a lot of familiar sights in the 2021 Toronto Blue Jays. For Yankee fans, the Jays have some players who can absolutely mash, like Teoscar Hernandez and Vladimir Guerrero Jr., both of whom have had crucial home runs in recent games. For Red Sox fans, there's enough TD signage to remind them of Celtics games. For Orioles fans, there are people like Tanner Roark and Ross Stripling who cannot seem to keep runs down for the life of them, despite being expressly paid to do so. And for the Rays fans who will no doubt be coming to games given the proximity from Tampa to Dunedin, there is an impressive youth movement of people like Alejandro Kirk and Bo Bichette, and fantastic pitchers like Hyun-Jin Ryu that Rays fans will confusedly wonder why they aren't being removed far earlier than they should.

In a season where good things will likely happen to the Toronto Blue Jays, it's nice to know that Yankee fans and Rays fans will likely be outnumbering home fans for the remainder of the season, which will certainly make the three-man division race fairly interesting.

Coming Tomorrow- Last year's NL MVP, who we're still sort of waiting on to show up.