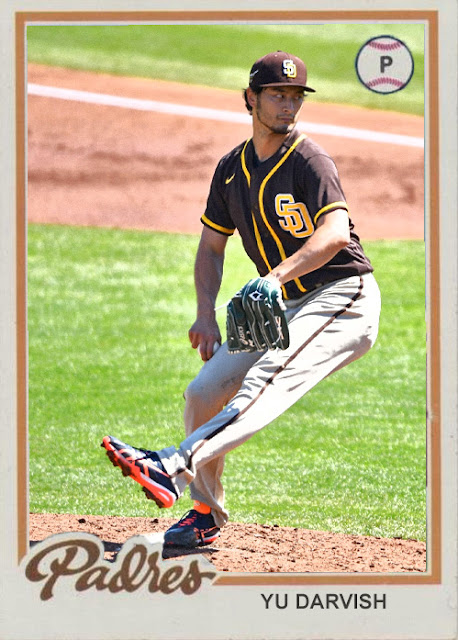 So, let's check in with the new additions to the San Diego rotation.

Blake Snell may have made the biggest splash, with 8 strikeouts and no earned runs in nearly 5 innings. The concerning part is the early departure, but I figure that Jayce Tingler is following in Kevin Cash's footsteps in taking Blake Snell out of a game too damned early. Maybe it's the thing people do.

And then Joe Musgrove had another really nice first start in San Diego, with 8 Ks and no earned runs in 6 innings, plus a game win. Was not expecting Musgrove to look the most polished out of everybody, but apparently what's good for Pittsburgh is also really good for the rest of the league as well.

And then there's the guy everybody thought would be running things. Yu Darvish. Whose first start left a bit to be desired.

I'm not saying Yu's first start of indicative of his entire season. Heck, his Cubs tenure famously took a while to get going, and he's one of those pitchers who needs time to acclimate to new environments. But 4 earned runs in 4.2 innings is not a good look, especially for an Opening Day start against the Arizona Diamondbacks, who are circling last this year. If it weren't for an insanely strong bullpen saving the day, including pristine numbers from Emilio Pagan, Taylor Williams, Keone Kela and closer Mark Melancon [I like the sound of that], the Padres would have been worse off.

The two hangers-on left in the rotation, Paddack and Morejon, are merely set dressing right now. Paddack is perfectly fine as a late-rotation starter [though he could pull a Patrick Corbin and come to life when nobody's expecting it], and Morejon is probably gonna surprise people by being pretty decent while they wait for Dinelson Lamet to come back. I'm writing this prior to Morejon's monday night start, so maybe he did a decent enough job against los Gigantes.

Meanwhile, the lineup hasn't been much of a problem. Eric Hosmer is absolutely on fire, Jurickson Profar is batting .400, Will Myers and Jake Cronenworth are providing great support and Fernando Tatis, while currently sub-.200, is still capable of mashing back in the early part of the season. You also have nice bench presences from former Yankee farmhand Jorge Mateo and Korean newcomer Ha-Seong Kim. While it's gonna take a bit for big pieces like Austin Nola and Trent Grisham rejoin the squad, they're still doing well enough right now to feel like a serious threat to the Dodgers for the throne.

In the coming weeks, we'll get a better picture of this rotation, and of Yu Darvish. Then I'll make a clearer judgment of things.

Coming Tomorrow- I was watching the movie Heist the other day. David Mamet film, very deliberate dialogue. There's a scene where Gene Hackman and Danny DeVito are talking about Hackman's girlfriend. Hackman says "I'm very resilient." Devito replies "so's Gumby." Reminded me of someone who pitches for my team.