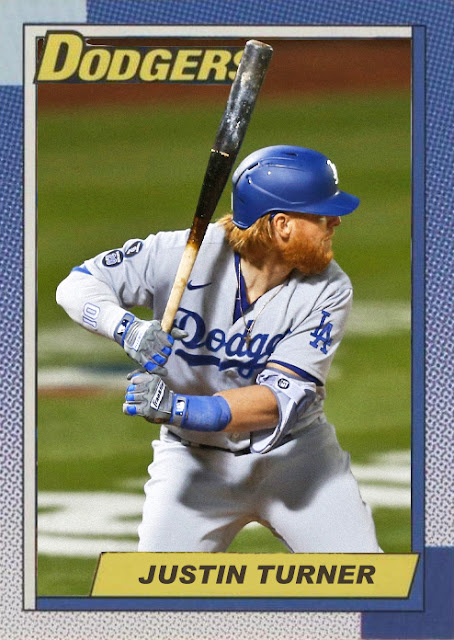 Not only do they have the best W/L ratio in the league, but their entire rotation of Kershaw-Bauer-Buehler-Urias-May is ALL pitching really well, the majority of their lineup, including new rookie standout Zach McKinstry, is doing well at the plate, and Kenley Jansen seems to have put his recent woes behind him with 4 saves already. It's a triumph that, while everyone may have seen it coming, still feels really good.

One of the biggest successes of this team so far might be Justin Turner, who was a last minute decision to re-sign with the team for another two years [three if he does well enough]. Turner's 36, has had a few injury-plagued years lately, and was expected to be a low-key contact hitter like usual. Right now, however, Turner is leading the league in RBIs and doubles, and is hitting .381 with 5 home runs. Call it April supremacy, call it good momentum, call it whatever you want, but Justin Turner is absolutely on fire right now, and it's an incredibly good thing for baseball. We need more great contact hitters right now, and Turner can do that while also hitting for power when necessary.

Matter of fact, the best performers on the team right now are all guys in their 30s. Max Muncy has the highest WAR on the team with 1.1, and is finally becoming a solid defensive option at first, which we were all worried about for a while. Clayton Kershaw at 33 is finally returning to his days of running the rotation easily, with 3 wins and a 2.19 ERA in his first 4 starts. Even noted 30-year-old Trevor Bauer is leading the team in strikeouts and narrowly avoiding controversy with his alleged ball-doctoring crisis. While the youth still does well on this team, and while I'm very thankful for under-25 guys like Dustin May and Julio Urias [jeez he's still only 24, holy crap], this is still a veteran-led squad, and with the amount of promise this team has this year, I'm happy for it.

The only issue I can foresee is injuries. They've lost Cody Bellinger for a bit, and they also just lost Gavin Lux. McKinstry is a good replacement for Bellinger, but they have yet to find a solid enough replacement at second. It's gonna be guys like Sheldon Neuse and Edwin Rios for a bit, and I hope they figure out how to hit.

Still, first place Dodgers, and best-in-the-league Dodgers. That's not a bad way to start things off.

Coming Tonight: [just said to myself 'dang this division is a shitshow'] Hero infielder for a team that really should be better off in the standings than they are right now.