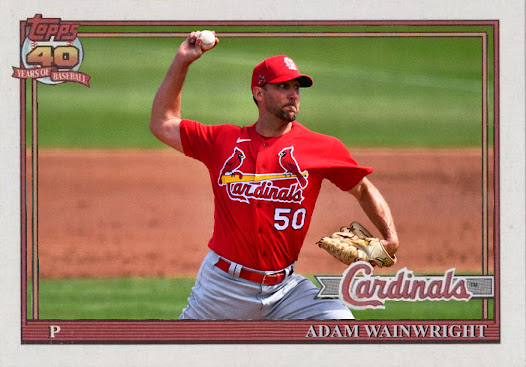 We're getting to the point where 2021 may be the final season for a lot all-time greats. Albert Pujols's contract runs out after this year, Nelson Cruz only signed a one-year deal, and Jon Lester and Justin Verlander both are approaching precarious injury situations.

And then there's Adam Wainwright. One start into his age-39 season and he's already worrying some people.

Wainwright's first start of the season only lasted 2.2 innings, and he gave up 7 hits and 6 earned runs in that time period to the Cincinnati Reds, who are becoming an early favorite in the NL Central. He only struck out one batter, and his former glory of knocking down lineups and being intimidating up there seemed to be past him. He does start the home opener tomorrow, but it's against Corbin Burnes, a younger, more intimidating fire baller, and a very potent Brewer roster.

It's telling that Waino and Carlos Martinez, two staples of the mid-2010s Cardinals playoff teams, are the ones who are holding back the Cards' rotation. Flaherty had a great start today, and both John Gant and Daniel Poncedeleon have been impressive in early starts. But it seems like the Cardinals are trying to forge a new identity, and Wainwright, and his depleted numbers, are holding the team back.

Look at the lineup- yes, they've still rallied around Yadier Molina, but different kinds of batters are succeeding in St. Louis now. Not just power-hitters like Paul Goldschmidt, but five-tool guys like Nolan Arenado and Tommy Edman, and lethal contact guys like Dylan Carlson and Paul De Jong. True, some people still aren't hitting for average, but this is an intriguing team that's coming together, and even if they don't ace the division, they're still gonna be at it for a while.

I kinda hope that Wainwright has some better starts, but it's looking like 2021 might be the capper on a strong career. He's a Cardinals legend for sure, regardless of what BBWAA writers think in a few years.

Coming Tomorrow- You can take the hitter out of Denver, but you can't take Denver out of the hitter.