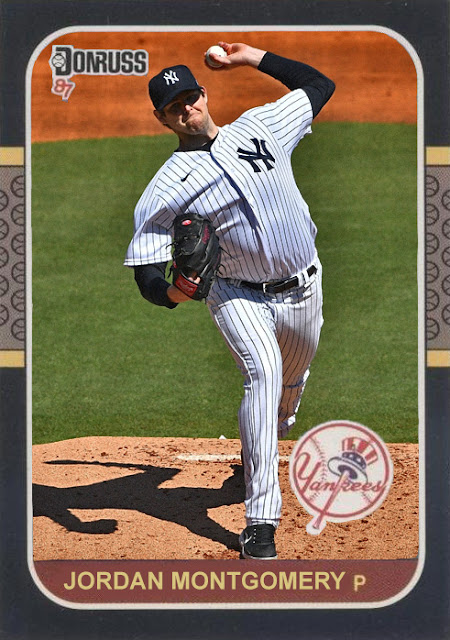 It's very affirming to have someone doing well for your team that shares your first name.

Jordan Montgomery, in past years, has been either the fifth starter in a jacked rotation or the extra 'if we need him' guy off the IL. But last night, he made a case for New York legitimacy with six strong innings against the Baltimore Orioles. Not only did the O's have momentum from winning their first 3 games, but they had the youth movement of Cedric Mullins, Ryan Mountcastle, Ramon Urias and new call-up Ryan McKenna...and Montgomery shut them down, with 7 Ks, 4 coming specifically from that youth movement.

It's even more impressive when you remember that the opening triptych of the rotation weren't able to get any wins. Cole and Kluber were impressive and formidable, but the bullpen either avenged or spoiled things for them. And then German couldn't get through the Blue Jays lineup without blowback, perhaps as payback for his domestic abuse. The Yankees are also being very careful about Jameson Taillon, making sure Gerrit Cole gets his second start in before he debuts for the year, and most likely limiting his innings in the first bunch of starts.

So, for the first big starting performance of the year to come not from Gerrit Cole but JORDAN MONTGOMERY? Fun Gumby from the back of the rotation? That's nuts!

As I predicted, the lineup is beginning to show up in the Bronx, as Stanton hit a grandy last night, Judge and LeMahieu are pretty hot finally, and Frazier and Torres are hitting somewhat for average. If you're shocked that most of this team isn't hitting for average, you must be expecting a different team. These are the Yankees, they swing for the fences or for the dugout, every time. Jay Bruce and Aaron Hicks are gonna strike out a bunch of times, but eventually their averages are gonna realign once the team comes around more wins.

I just hope the wins keep coming. This division could be tricky, considering how Toronto, Tampa and even Baltimore have been looking early. The Yankees are stacked, but they're human, and they could spend a lot of April trying to find .500 and still being a few pieces from great. Hopefully they can be as good as the sportswriters want them to be this season, but it's not a guarantee until this team finds the momentum.

Coming Tonight: I am no longer wondering why nobody predicted this team to be good this year. Their new outfielder and his underwhelming numbers.