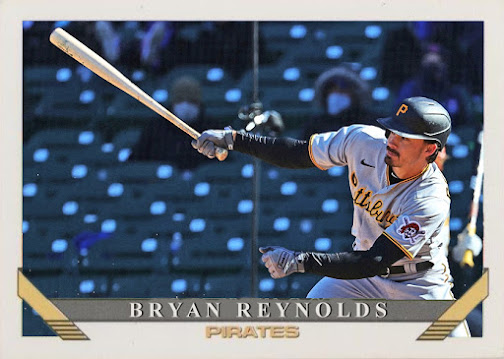 Here we are again, just like 2007, when I came into the hobby. Atrocious Pittsburgh Pirates.

Okay, not quite 'atrocious'. Atrocious implies that there's nothing salvageable from this team, and there actually is plenty. Even as Gregory Polanco wilts in a leadership position, Bryan Reynolds is making up for his sophomore season with an impressive start, hitting for average and doing a lot of the leadership stuff that Polanco was tasked to do. Colin Moran is still the power hitter extraordinaire, leading the team in RBIs [and strikeouts], and whomping stuff when he can. J.T. Brubaker is having an impressive sophomore season, nailing both his starts so far.

And most surprisingly, Phillip Evans' 2020 bench rise was NOT a fluke, and the former Mets farmhand is a fixture in Pittsburgh [thanks, sadly, to an injury to Ke'Bryan Hayes], hitting .382 with 3 homers already. Evans is one of those wild players who never found a home, and the Pirates are taking whatever help they can right now, so it's a perfect fit.

But the rest of this is just...not pretty. People who cannot hit, like Anthony Alford and Dustin Fowler, are being eyed for starting positions. People who cannot keep an opposing offense down, like Trevor Cahill and Chad Kuhl, are highly regarded starters. A lot of this team is made of people who are doing well enough, like Jacob Stallings and Mitch Keller, but might not do well on a team of slightly higher quality. And the few people who are succeeding, like Richard Rodriguez and Jacob Stallings, might be on a trade block later this season anyway.

I hate that it's gotten to this point in Pittsburgh. I loved seeing these teams do relatively well in the postseason, and I loved seeing them defy the odds and compete for a while. And now that we're back to 'pathetic Pirates' era, it's just disheartening. I sincerely hope that Ke'Bryan Hayes is a harbinger of a new youth movement in Pittsburgh, but seeing as he's injured and there hasn't exactly been a successor of similar age, I'm getting a little worried.

For now, I hope the people who are playing well remain integral to the team, and that the bloodloss isn't enough to completely derail it all.