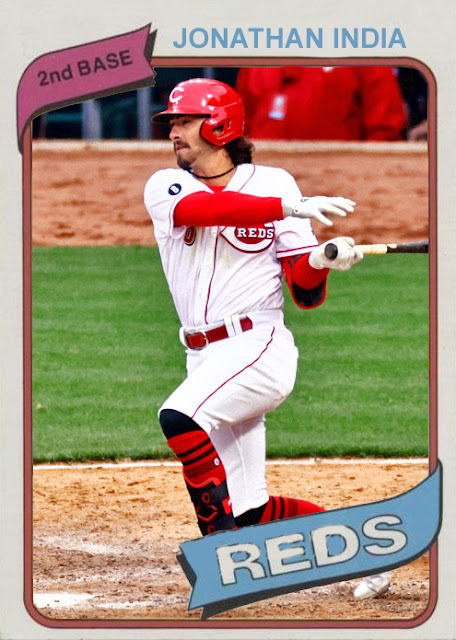 Jonathan India has 11 hits...and 11 RBIs. While sporting a .379 average in his first 8 major league teams ever.

Oh yeah, and the Reds are 6-3 and starting the season in first in the NL Central. Big things are happening in Cincinnati.

I'm not acting like India's come-up has been the sole reason for the Reds' hot start [which was cooled a bit by a series in Arizona], but he's one of the big ones. Like Fernando Tatis in 2019, India came into the season after a phenomenal showing in Spring Training, after which a specific starting spot was paved directly for him [by moving Mike Moustakas back to third where he belongs]. However, while Tatis was more of the power hitter and ball-demolisher, India is excelling more as a contact hitter right now, despite his aforementioned 11 RBIs.

However, when you look at a lot of the rest of this team, India's .379 looks pretty common. Mike Moustakas, Tucker Barnhart, Tyler Naquin, Nick Castellanos, Nick Senzel, Jesse Winker and Tyler Stephenson are ALL playing beautifully right now. Naquin and Castellanos were going up against each other with homers for a while back there, and Naquin is currently higher with 5. Stephenson and Barnhart combine to give the catching position in Cincinnati a +0.9 WAR in the first week and a half of the season.

Things are going really well, especially with this lineup.

And then...there's the rotation, which hasn't exactly clicked yet. Luis Castillo, Jose de Leon and Jeff Hoffman have had trouble in early starts. Tyler Mahle and Wade Miley [who, fun fact, have the exact same last name if you are a southerner] have been impressive so far, though, but...it's clear that taking Anthony Desclafani, Trevor Bauer and, for the moment, Sonny Gray out of this rotation weakens it a little bit. I expect Castillo to rebound, but if there are gonna be holes in this once-strong rotation, it's gonna be easy to exploit, no matter who's hitting well.

Also, if the Reds are intent on using Amir Garrett in the ninth over Sean Doolittle, Garrett is gonna need to give up far less runs in save situations. Doo is sitting there and not giving up any runs, and he's looking like a better option for closer than Amir Garrett and his 15 ERA. I love Garrett, I think he's a fantastic relief option, but I don't think his closing stuff is gonna cut it right now.

This is a flawed team, no doubt, but if that lineup stays this good, and if the great elements of this team stay great, we could have a legitimate NL Central contender on our hands. I say this as the Brewers and Cardinals still definitely exist, but...hell, it could be close. You never know.

Coming Tomorrow- One of the most cerebral pitchers in baseball...you know, the one who doesn't use illegal substances on his baseballs.