What is undoubtedly one of the bigger rookie cards in 2021 Topps appears in this batch of 2020 Topps Final Edition cards, along with some odds and ends of veteran careers, a few potential All Stars, and some guys who could factor into the 2021 season. 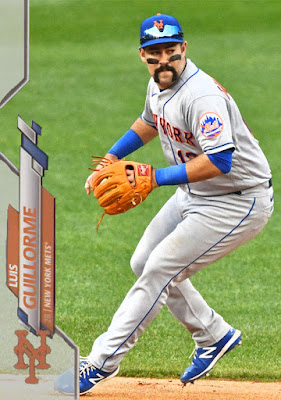 Card #145- Luis Guillorme, New York Mets
After a decent come-up in 2019, Luis Guillorme still needed the right moment to convince the Mets that he'd be a successful infield choice for the coming years. He got 29 games in 2020 to do so along with Andres Gimenez covering short, and the two melded immediately. Guillorme had the slightly less showy season of the two, but he still hit .333 with 9 RBIs in that time. So far he's been used as a backup for the Mets in 2021, but his contact abilities seem to be retained. 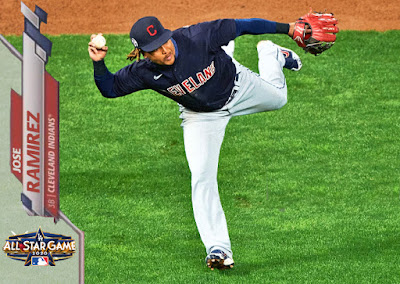 Card #146- Jose Ramirez ASG, Cleveland Indians
It should not shock you that if the 2020 season had been played in full, and there had been an All Star Game in LA, Jose Ramirez would have been starting at 3rd base for the AL. Ramirez was the best third baseman in the AL last year, the best position player in Cleveland, and the runner-up to the MVP voting. It's that simple. 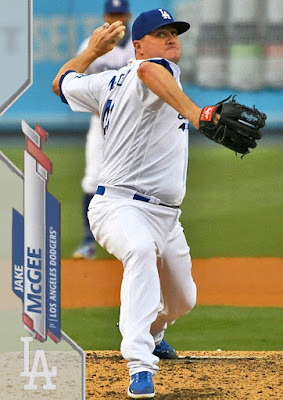 Card #147- Jake McGee, Los Angeles Dodgers
Jake McGee is one of those relievers that doesn't exactly make the news, but does solid work and is rewarded for it. He's been with the Rockies for the last 4 seasons, so 2020 was his first year out of there, and he made camp with the Dodgers in the nick of time. McGee had a 2.66 ERA in 24 games with 33 Ks, and managed one scoreless inning in the World Series to account for his shakier stuff in the NLCS. McGee is now closing games for the San Fransisco Giants, and is already off to a fantastic start. 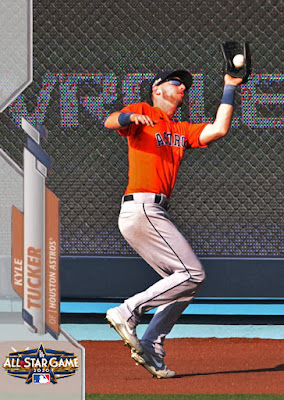 Card #148- Kyle Tucker ASG, Houston Astros
Yeah, here's an All Star shocker- if things has gone statistically by position rather than '3 wrangled outfielders at the top of the heap', Kyle Tucker would have been the starting left fielder for the AL. May not look like much from a name brand standpoint, but Tucker had an excellent breakout season last year, with 42 RBIs and a league-leading 6 triples. Looks to be off to a decent start this year as well. 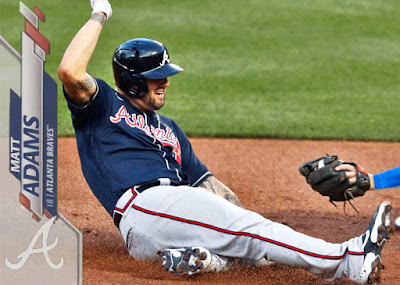 Card #149- Matt Adams, Atlanta Braves
Matt Adams had a weird career, man. He only played for 3 teams over the course of a 9-year career...but he just played for them multiple times. It just goes...Cardinals-Braves-Nationals-Cardinals-Nationals-Braves. It's like remembering how Henry VIII's wives died. Still, 2020 was Adams' return to Atlanta after impressively filling in for Freddie Freeman in 2017, and it was...far less good. In 16 games, he hit .184 with 9 RBIs and 18 strikeouts. It looks like the end of Adams' career, although he did sign a minor league deal with Colorado last month, and he could potentially still make the Rox at some point. Which would be odd. A fourth team? 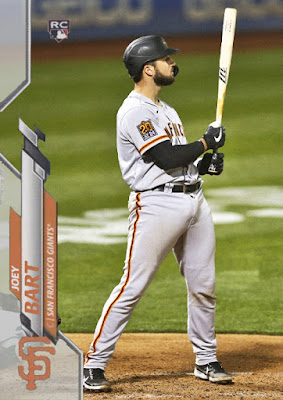 Card #150- Joey Bart, San Francisco Giants
From the beginning of the season, when it became clear that Buster Posey would not be playing at all in 2020, and as the catching options became Tyler Heineman and Chadwick Tromp, the chorus of Giants fans bellowing 'PROMOTE BART' gradually built over time. Eventually the Giants had no choice, and brought up the much-touted catching prospect Joey Bart, and gave him 33 games in the majors. And he did...alright in that time. He hit .233 with 7 RBIs and a 0.4 WAR, which wasn't BAD, but it also wasn't the heir apparent stuff Giants fans were hoping for. So, the Giants are giving him a bit more time in the minors as Posey reclaims his spot, which isn't a bad idea. 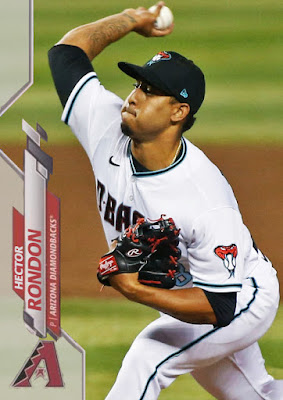 Card #151- Hector Rondon, Arizona Diamondbacks
Hector Rondon won a ring with the Cubs and chased glory with the Astros, so he's been on ferocious, competitive teams before, but his greatest struggle as a relief specialist may have come last year in Arizona. Brought in to give the D-Backs an expert force in a mostly youth-driven bullpen, Rondon hit a 7.65 ERA in 23 games. Not a great showing at all. Rondon missed camp with the Phillies this year but is still employed by the Red Sox organization. 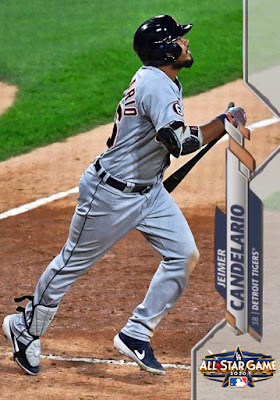 Card #152- Jeimer Candelario ASG, Detroit Tigers
Jeimer Candelario would have been the Tigers' only ASG representative had the game happened last year. A relief as well, as Candelario's better numbers appeared for the Tigers when all hope was lost, and when Cron and Schoop both were injured. The third baseman surprised many by hitting for average, .297, with 29 RBIs and 7 home runs, a solid run for a 60 game season. He's taking a similar slow approach this season so far, but hopefully he'll come along as we go. 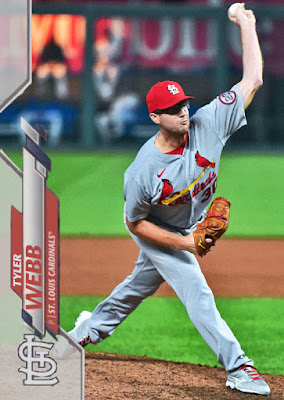 Card #153- Tyler Webb, St. Louis Cardinals
A season after pleading for stationary growth after bopping around the leagues like a supernal, Tyler Webb took the Cardinals' trust in him as a means to coast for a little while. In 21 games, Webb had a 2.01 ERA and 19 Ks, and was a trusted arm in a season of slight disarray for that pitching squad. So far he's not having as smooth of a time of things in St. Louis, but hopefully things turn around.

And in the next 9 cards on Friday, we get another highly-touted rookie, plus some neglected relief stars of last year.