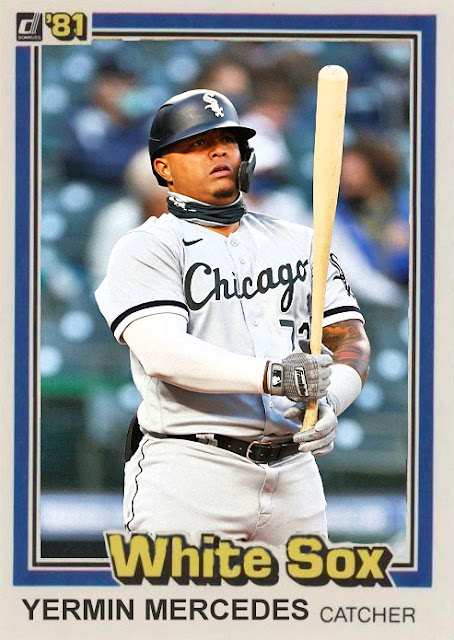 Eight straight hits to begin a rookie season. A .429 average after 46 at-bats, including a team-leading 10 RBIs. And you guys really thought the White Sox' big rookie DH would be Andrew Vaughn.

Man, Yermin Mercedes has been a complete breath of fresh air in a team that's honestly a bit below expectations right now. Mercedes has been one of the key players so far, and we're still waiting for the better numbers of Jose Abreu, Yoan Moncada, Tim Anderson, Dallas Keuchel and Liam Hendriks to show up. That's a depressing stat, honestly. The team was supposed to thrive off of all of those players, and some backup catcher yielded in a Rule 5 deal is outplaying them all right now. That definitely speaks volumes, especially to the people who were picking the Sox to win the World Series this year.

Not that there's still not a chance of a rebound. I mean, enough of this team is doing well enough that they're still in third, and they're slowly catching up to the Indians [despite being a game behind them thanks to a loss yesterday to Boston]. But enough isn't that we all have reason to be worried.

The bottom line is that the Sox still have Lance Lynn pitching to normal caliber [read: striking everyone out], they're getting great seasons out of Carlos Rodon and Lucas Giolito, they finally have a healthy Michael Kopech to rely on, and they're farming fantastic seasons from Danny Mendick, Adam Eaton and, yes prospectors, Luis Robert. LouBob is slightly power-ended this season, but he's still providing great extra-base work in lieu of some stumpage from Jose Abreu.

So I'm not saying that the White Sox are completely out of it, at least not yet, but they're gonna need their slumping core to find their better numbers soon, or else the Indians and Royals, and Twins honestly, are gonna separate quickly.

Coming Tonight: D'you think he switched his walk-up music from Ted Nugent's Stranglehold to LL Cool J's Mama Said Knock You Out given the return of his former mojo?