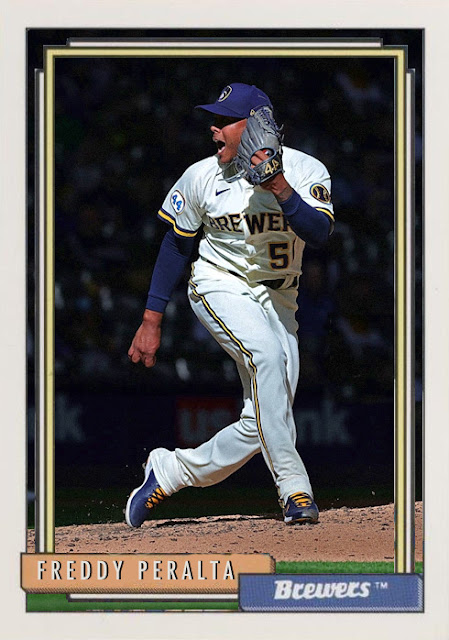 The Brewers, regardless of their lineup's woes right now, at least have the distinction of being one of the most ferociously strikeout-heavy teams in baseball right now. Right now, only two teams have three players with over 25 strikeouts over 4 starts- the Dodgers, which go without saying, and the Brewers.

The Brewers are the stranger case because, of these strikeout artists, one of them, Freddy Peralta, wasn't a sure shot for the rotation this year. Peralta had been a rotation piece for the starts of the last few seasons and had struggled with control and ERA. But the one thing he could consistently be counted on for was strikeouts. Last season, in relief, he had 47. FORTY-SEVEN STRIKEOUTS IN 15 GAMES, IN RELIEF. So clearly, if Peralta could work things out, he'd be a great starter. And that's where we're at now- after 4 starts, Peralta has accumulated 38 strikeouts, along with a 2.45 ERA and 2 wins. He is definitely a worthy starter, and a great piece in this team's picture.

But Corbin Burnes not only has 2 more Ks in 4 starts...Burnes hasn't allowed any walks yet. I know. It's insane. Yes, he's allowed an earned run, which, fine, you play for the Brewers, it happens. But no walks. Zero walks in 24 innings. That is something absolutely huge, and it doesn't happen everyday. It also just sums up how masterful Burnes has been this season, a masterful season I PREDICTED, BY THE WAY. Way back in March, I said Burnes was gonna do huge things this year, and so far he totally is. He's my NL Cy Young pick, and he's definitely in the conversation right now.

And I'd be remiss if I didn't mention that Brandon Woodruff is also pitching well right now, with a 1.96 ERA and 26 Ks. It's just dwarfed slightly by the other two strikeout artists. Still...three excellent starters, plus Adrian Houser who's at least coming along, and the Brewers are in a good position. They're also in first in the NL Central, and have Josh Hader, Brent Suter and J.P. Feyereisen all killing it in relief.

So, all that really remains is for the two stars of the team, Christian Yelich and Lorenzo Cain, to recover from injuries, and we can really start talking about the Brewers as a competitor. I'm sorry, but everyone in this division has ebbed and flowed so far. The Cardinals, Reds, Cubs and now Brewers have had their time at the top, and it's never lasted because they're all finding their footing. The Brewers are still finding theirs, and without Yelich and Cain, they have to build the lineup around people like Omar Narvaez, Billy McKinney and Travis Shaw. Not that these guys aren't playing well, they're just not the lineup anchors this team had in mind, especially as JBJ and Wong bat around the .200 area.

The Brewers could be a really good team this year. They just need to get the lineup on the same page as the rotation.

Coming Tomorrow- I'm writing this as they're currently winning against the Orioles, and are looking to keep their winning streak going for a thirteenth consecutive game. I really hope they can.