With this 2020 Final Edition post, we reach our second 10-multiple, and our second grouping of 90 cards, propelling us well into the second half of the set. There are still big subjects and big omissions left to go, and there are a few in this post to say the least. 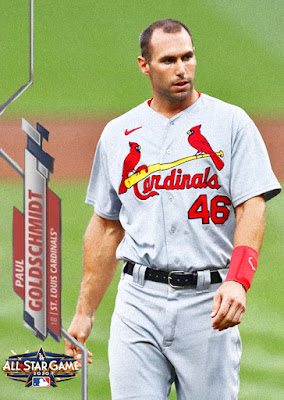 [I don't know why the border shading isn't on this one. Oh well]

Thanks to the stellar year by Freddie Freeman, Paul Goldschmidt would not have been the NL's starting first baseman had the 2020 All Star Game happened as planned. But he definitely would have been a reserve member of the team, considering that his 2020 was a return to form for Goldy's contact hitting. Goldschmidt hit .304 in 58 games with 21 RBIs and a 2.0 WAR, which measures out to a 5.4 if the season had gone all 162 games, right there with his Diamondbacks numbers. Goldy is off to an okay start in 2021 so far, so hopefully things pick up and he returns for another ASG nod. 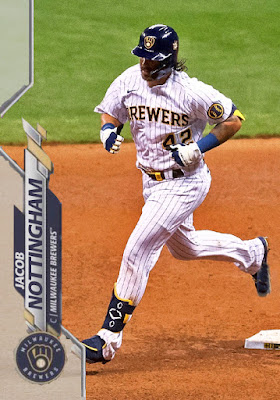 Card #173- Jacob Nottingham, Milwaukee Brewers
In a season where Omar Narvaez and Manny Pina were both injured for several games, the Brewers needed a third catcher for security, and that's where Jacob Nottingham came in. Aside from being a decent defensive catcher, Nottingham was also an RBI machine, with 13 ribbies and 4 homers in a 20 game span. His lack of contact hitting ability did make him the third string option in 2021, hence his recent DFA-ing, but Nottingham has a nice amount of spark at the ready. 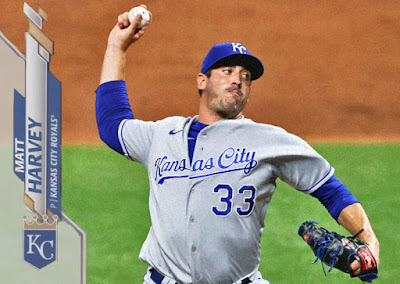 Card #174- Matt Harvey, Kansas City Royals
The continuing saga of Matt Harvey's disgraced fastball led him to Kansas City in 2020, after already failing in New York, Cincinnati and Anaheim. In 7 games, Harvey continued to demonstrate how far gone he's become, with an 11.57 ERA and 15 earned runs. Harvey is doing marginally better in a starting role in Baltimore thus far, but his 5.12 ERA is leaving a bit to be desired. 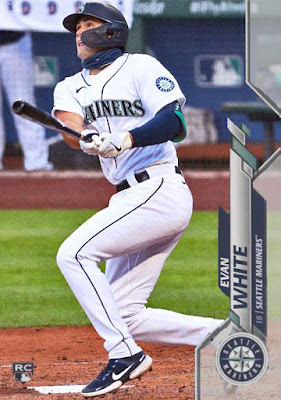 Card #175- Evan White, Seattle Mariners
A big deal for the Mariners by A.) making the opening day roster as a rookie, and B.) winning a gold glove as a rookie, Evan White made a name for himself as a steady defender with no bat last year. And look, as the stats will show, his numbers at first are pretty good, and worthy at merit, but he hit .170 last year, and is hitting .176 right now. I'm glad that he's good at something, but unless the Mariners are willing to be patient for his contact numbers, they've got a lot of trouble on their hands here. 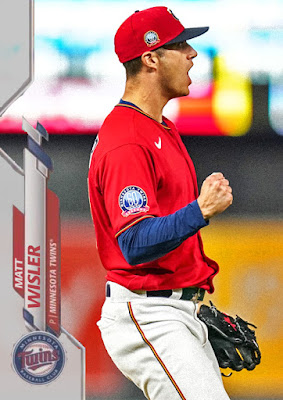 Card #176- Matt Wisler, Minnesota Twins
A failed starter in Atlanta, Matt Wisler bounced around for a few seasons before finding his niche as a middle-relief weapon in Minnesota last year. In 18 appearances he banked a 1.07 ERA and 35 Ks, and felt more comfortable in relief than starting, which sort of sealed his fate for the rest of his career. Wisler has been less accurate in the first month of play in San Francisco, but hopefully things will even out over time. 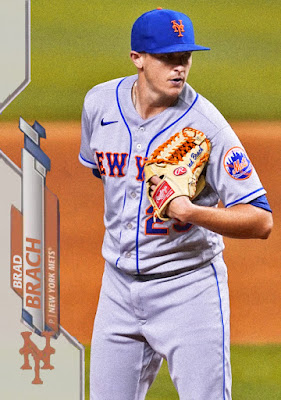 Card #177- Brad Brach, New York Mets
A former All Star as a Baltimore reliever, Brad Brach has been a decent eighth inning option for competitive teams over the past few years. After being picked up by the Mets midway through 2019, Brach stuck around for the following season, and his numbers fell off slightly. In 14 games, he had a 5.84 ERA and a high WHIP, being one of the factors that gradually sank the Mets bullpen last year. He seems to still be in the Royals organization, so I'm not sure when he'll see the majors again [UPDATE: HE GOT CALLED UP TODAY!] 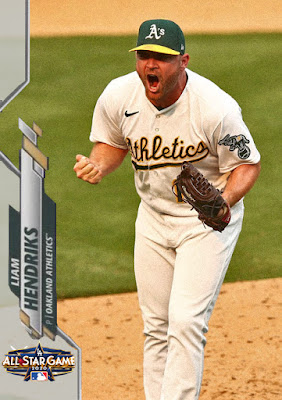 Card #178- Liam Hendriks ASG, Oakland Athletics
This one goes without saying. Liam Hendriks was one of the best relievers in baseball last year, was a chief factor in the Athletics making the playoffs, and made a name for himself as a go-to closer. He would have been a surefire All Star last season, and it saddens me that because of the shortened 2020 season, he's still only limited to one ASG appearance. But, as he finds his control in Chicago, he could always register for another one. 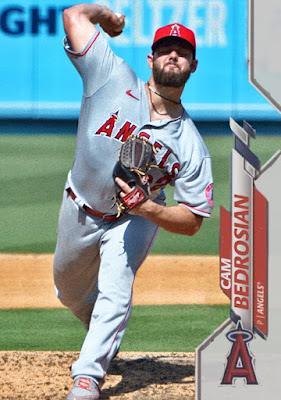 Card #179- Cam Bedrosian, Los Angeles Angels
The son of a former Phillies Cy Young winner, Cam Bedrosian had battled injuries for several years as a member of the Angels bullpen. Last year Bedrosian only made 11 starts, and he did fairly well, with a 2.45 ERA and 11 Ks. Unfortunately his numbers with the Reds in 2021 were not enough to keep him on the active roster, and he's since elected free agency. 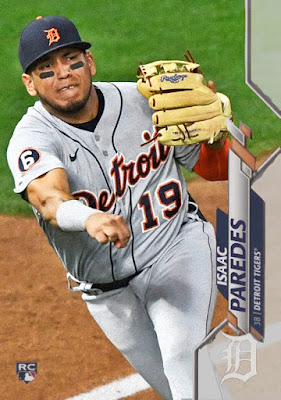 Card #180- Isaac Paredes, Detroit Tigers
One of the bigger names to make the majors in Detroit, besides Casey Mize, Isaac Paredes has been a well-regarded infield prospect for a few years. He hit the ground running in the majors, having some great RBI days to start his season, before leveling off toward a .220 average and a negative WAR in 34 games. Paredes has yet to make the majors in 2021, but it may happen soon at this rate.
The next 9 of these post on here on Monday. Expect lots of relievers.
Posted by Jordan at 4:23 PM