With this post, we reach the halfway point of 2020 Topps Final Edition. We started in February, we've hit 165/330 in April, which means at this rate we'll finish in like June. Hope that's alright. I'm still enjoying rolling these out, hope y'all are still enjoying looking at them.

Anyway, here's the next 9 cards in the set: 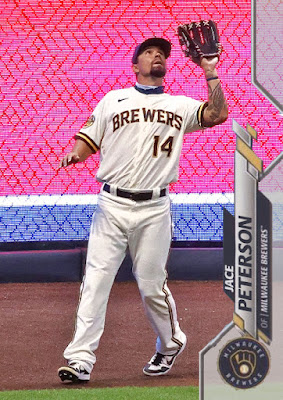 A former Braves infielder from the dire mid-2010s teams, Jace Peterson had bopped between New York and Baltimore for a few years before settling in Milwaukee for 2020. Peterson, primarily a 3rd baseman, was used in an outfield role to cover for the loss of Lorenzo Cain, and did alright at the plate with a .200 average and 5 RBIs. His decent bench work was rewarded by the Brewers, as they re-upped him for 2021. 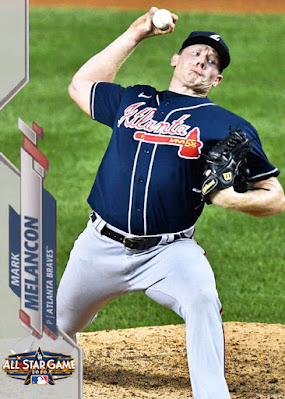 Card #164- Mark Melancon ASG, Atlanta Braves
If a potential 2020 All Star Game had happened, and both managers were allowed a limited number of relief options, I still think Mark Melancon would have been on Dave Martinez' shortlist. After failing in big-contract deals in SF before this, Melancon finally had the pressure off as part of a super-bullpen in Atlanta, and rose to the closing gig like no time had passed. Melancon's ability not only to work the ninth but aid the team in regular relief was an asset to a surging Braves squad, and would have garnered Melancon his fourth ASG gig. But I suppose that will have to happen this year in Colorado. 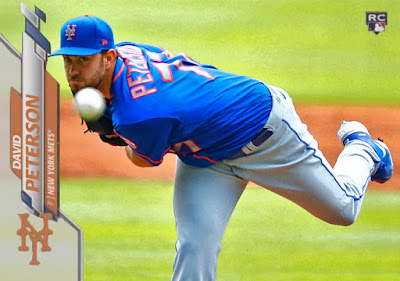 Card #165- David Peterson, New York Mets
David Peterson was the biggest rookie call-up in Queens last year, even bigger than Andres Gimenez. Peterson had been a strong arm in the minors for a few years, and was brought up to cover for the tepid results of Wacha and Porcello's signings. Peterson had to fight injury at one point, but still finished the season with great numbers, including a 3.44 ERA in 10 games, and 40 strikeouts. While he hasn't been as lucky in 2021 so far, he definitely has the big-game ability the Mets were worried they'd lost with the dissolution of the 2015 rotation. 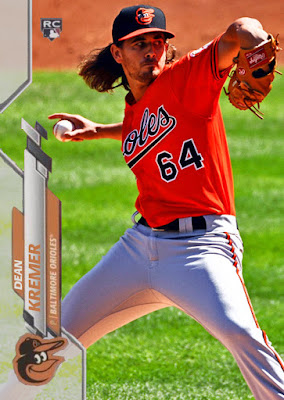 Card #166- Dean Kremer, Baltimore Orioles
The pride of Israel, Dean Kremer became the first ever Israeli citizen [his folks are from there so he has citizenship] to play in the majors, and his first few starts for the O's were a ton to celebrate. He struck out 22 in 18 innings, and had a 4.82 ERA in 4 games, certainly not a bad shake of things for a struggling rotation. So far his numbers have been up to his 2020 standards, and he's since been demoted, but I imagine he's like John Means in that he needs to fail a little in order to get into his stride. 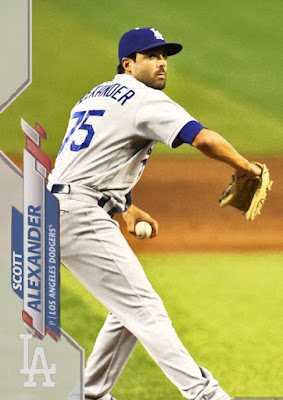 Card #167- Scott Alexander, Los Angeles Dodgers
Alexander has been one of the many sharp relievers to come out of the Dodgers' bullpen, and he continued his strong work in the shortened 2020 season. In only 13 appearances, Alexander posted a 2.92 ERA with 2 wins and 9 Ks, before missing the postseason due to injury. Nevertheless, Alexander is still counted on as an integral member of the Dodgers' current bullpen. 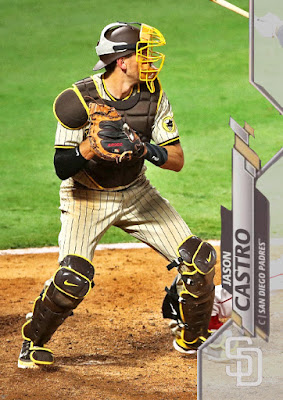 Card #168- Jason Castro, San Diego Padres
Jason Castro's slow fall from starting catching weapon to backup catcher has officially set in, as his contact ability has dissipated since leaving Houston. After backing up Max Stassi in LA for the first half of the 2020 season, Castro was picked up as a backup option for the Padres, who were now without Luis Torrens and Austin Hedges. Castro proceeded to hit .179 in 9 regular season games, and didn't have any offensive luck in the playoffs. Now he's back to backing up Martin Maldonado in Houston. 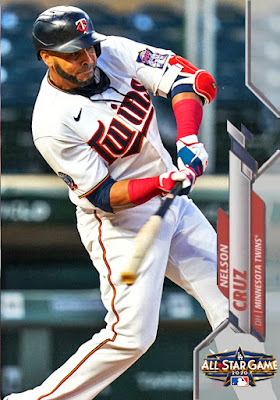 Card #169- Nelson Cruz ASG, Minnesota Twins
This should not shock you. Not that Nelson Cruz would have been an All Star last year, and not that he would have been the AL's starting DH. While an earlier HGH suspension has made me wary of the authenticity of his late-era exploits, it's still a wonder that at 39, Cruz can still hit .300 and bounce homers over the wall. Hell, he already has 4 home runs on the season, and he's hitting .390. Though logically 2021 may be his last contractual season, it may not be the end of his career. 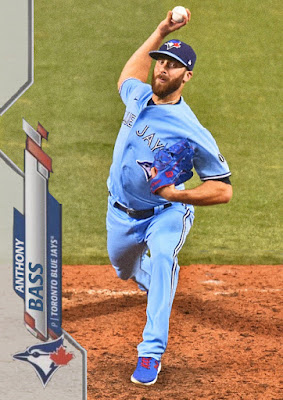 Card #170- Anthony Bass, Toronto Blue Jays
Anthony Bass is one of those journeyman odd-job relievers that you may not know, but has done some impressive stuff. He's pitched in Chicago, Seattle and Toronto the last few years and been a worthy relief option in all 3 cities. Last season in Toronto was doubly impressive because Bass was a ninth inning option for the first part of it, and he posted a 0.6 WAR in 26 games, even getting his first postseason strikeout out of it. So far, though, he's having some trouble in Miami this year. 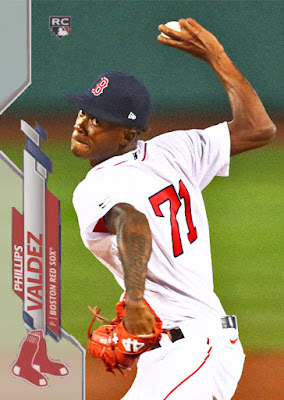 Phillips Valdez kicked around the minors for 10 years before making the Rangers in 2019, but had to get waived twice more in order to find a true home in Boston. Making the team out of camp, Valdez was an incredible relief option, with a 3.26 ERA in 24 games, with 30 Ks as well. Valdez is this string-bean-y type who throws smoke and keeps runs down. So far he's repeating the same kind of performance this year, so Boston's very lucky to have him.

The next 9 cards go up on Friday. This batch includes some very big rookies and a few interesting veterans to talk about.