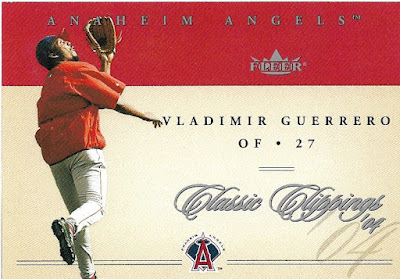 What makes something stand out?

For me, it's newness. The feeling that  these variables and elements haven't been brought together in this way to my knowledge. Something I've never seen before and looks cool. This is why I've always loved players in new uniforms. Gerrit Cole as a Yankee? Zack Wheeler as a Phillie? Amazing! It's new to me on a card, and therefore it stands out.

How odd, how new, must it have been in 2004 to see cards of Vladimir Guerrero as an Anaheim Angel? A man who'd worn the same Expos uniform since 1996, made a career as an  Expos hero...now playing for the Angels. Done up in a red warmup jacket, like the one above.

Something like that, in 2004 or even now, has the power to stand out to the average collector. Fleer knew this would be one of their first Vlad Angels cards. This looks the part.

To me, to want to collect  something means that it looks new to me, and that it sticks in my mind. 2004 Fleer Classic Clippings has stuck in my mind for 14 years, but it has nothing to do with Vladimir Guerrero.

In 2006, I was in fifth grade. I had not yet begun to collect baseball cards. My dad had his collection 'round  the house, and when  I was bored I would sort his old 70s and 80s cards by team, by year, by position at times. The players meant nothing to me. I was amused by the colors, the designs, the contrasts. They were cool enough even if I'd run by them a million times.

My fifth grade classroom had a sort of device where if you did good things, impressed the teacher in some way, you get a ticket with  your name in the fishbowl. If your name gets called, you  pick from the prize bucket. Lots of assorted cool stuff in there. Appealed to many different people.

But sprinkled throughout that  prize bucket were...packs of baseball cards. But not usual packs, like sealed, retail packs. These were cello-wrapped selections from 2004 Fleer products. Apparently my  fifth grade teacher knew a guy who worked for Fleer who, when the company was bought by Upper Deck in 2005, had a number of leftover cello-pack samplers from 2004 products. So this was his way of getting rid of them.

I didn't win in fishbowl very often, because a lot of probability went into that...but when I did, I remember going for those grab-packs of baseball cards. They spoke to me just from their contrast to the baseball cards I was familiar with from my dad's collection.

My initial quest was to chase the names I knew. From a childhood of playing 2003 Backyard Baseball, certain names were familiar to me. Todd Helton. Nomar Garciaparra. Andruw Jones. And seeing them in  packs appealed to my young sensibilities as a collector. 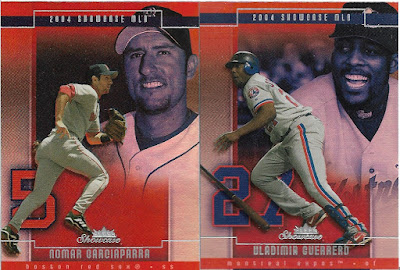 What I didn't yet understand was that I was looking at a picture of an MLB that didn't exist  anymore. The Expos were dead in 2007. The Red Sox had won a World Series, and would soon win another. Shawn Green and Richie Sexson were calming down. Barry Bonds, Roger Clemens and Alex Rodriguez wouldn't rule the MLB for much longer.

Nomar and Vlad were outdated in these uniforms by the time this set came out. Not that I'd have known or cared. They were stars, right out of the video game. And they belonged in my now burgeoning collection.

Eventually, the people I began pulling cards of began to exceed my  grasp. Who was this big guy, Bartolo Colon, throwing smoke? Why was it such a big deal that Billy Wagner was pitching for my hometown Phillies? And who was this Josh Beckett guy, whose face I'd seen on the top of a pack, from Flair? Why was he so special?

It turned into me going through these packs with my dad. 'Is he good? Is he good?' And him rationalizing and saying that Reggie Sanders was DHing in Kansas City, not in St. Louis, and that Angel Berroa was slumping in KC, and that Doug Mientkiewicz was a backup at best. But that Mark Teixeira one might be good to hold onto. 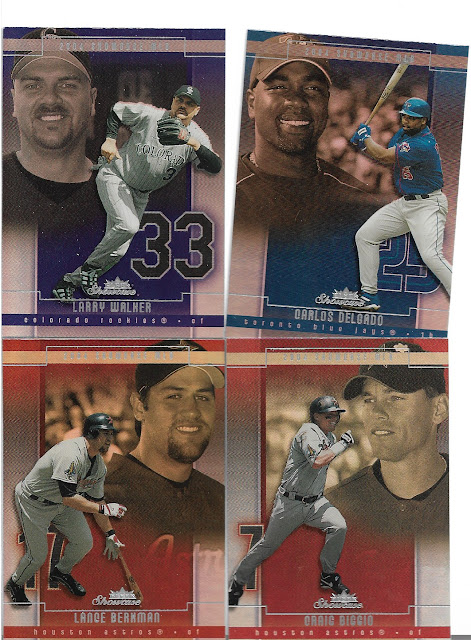 I won a bunch of these. Stole a few and got caught. By the end of the year, a bunch were left in wrappers that were new to me, unknown to me, and I never got to see what was in them.

There were other factors as well. My friend from down the road getting a complete set of 2005 Topps, with  even more newness and shared collaboration with the 2004 universe. Then around this time, I kept getting invited to Little League end of the year parties, and everyone would go home with a pack of Topps from 2007. And that  turned into me wanting  to expand the universe further and buy more packs, which led to me going crazy on 2007 Topps and Opening Day and Upper Deck and...cannonballing headfirst into the hobby.

But the 2004 packs were always my first, and they always stuck out to me. I wondered what the rest of them  that I didn't get looked like. How Carlos Delgado and Lance Berkman looked on 2004 Showcase. How the other Skybox Autographics portraits looked. 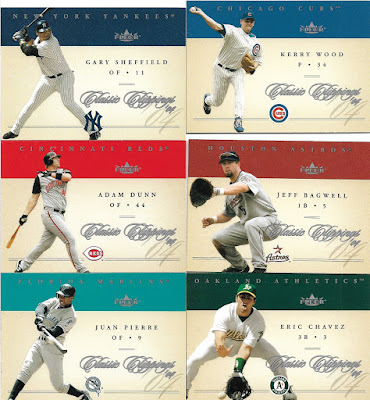 JustCommons finally uploaded some of them to their mega-catalog. So I figured, what the hell.

The results yielded some players I didn't recognize in these designs. Juan Pierre on  Classic Clippings? I only knew the Patchworks one.

The faces were the same as I remembered. Kerry Wood at his peak, Jeff Bagwell winding down, Eric Chavez healthy. 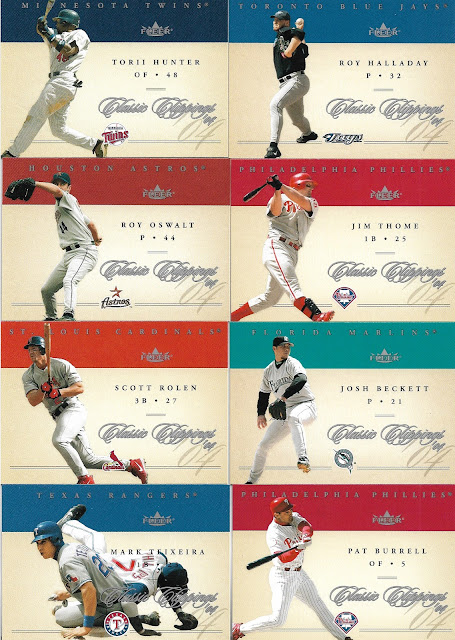 These were even more jarring. Thome, Halladay and Burrell in this set? Had I finally gotten those? And how could then even do a photo like Teixeira's on Classic Clippings.

The newness, and the cool detail, still got to me 14 years later. The set still lived and breathed like it did in  those packs from Fleer. 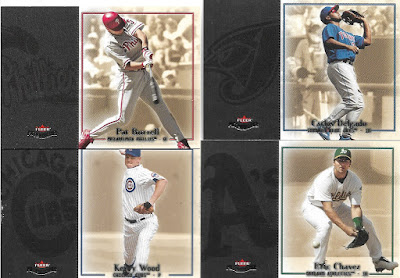 They had less of the Patchworks ones I needed, but seeing Kerry Wood and Eric Chavez in this set made it feel better. The finality, the closure of a lot of this...that helped immensely. 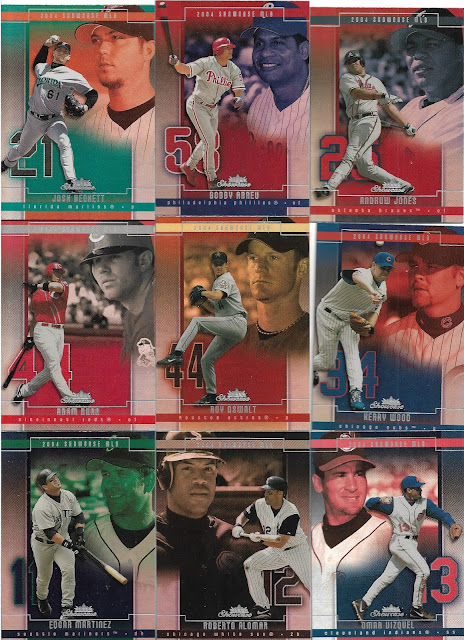 The Showcase ones really impressed me. Not only  because this  set looks and scans the best of the 3, but a lot of these players just look awesome in  this set. Alomar as a White Sox is in  this set. Final-year Edgar Martinez is in this set. All of this meant so much to me. 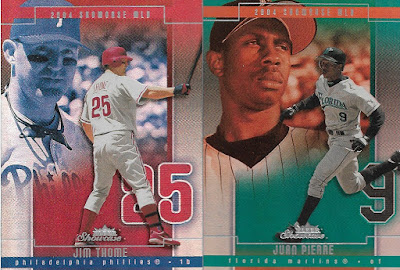 But not as much as these two.

In 2004, even in an MLB where Derek Jeter existed, Jim Thome was my favorite player. We'd been to Citizens Bank Park a few times after it opened, and Thome was undeniably the star, hitting like hell, and making it worthwhile. Thome was so much fun to watch, and he was an easy pick to collect in  this era.

In 2008, my last year of little league, due to my lack of hitting against 12-year-old pitching, my coach decided to use me as a pinch-hitter, a bunt-over kind of guy. My dad pointed me towards Juan Pierre, then with the Dodgers, just as a source of speed and bunting. Pierre quickly became one of my  favorites, even after his wonderful year in Philadelphia, and I realized I needed to collect him as well.

These two players were  benchmarks in  my  collection, and among  the many  reasons, along with 2004 Fleer Showcase, that I collect. To have  them finally felt right. It felt new, and special, and it felt right.

I've still got a few more singles left to track down for my collection from these sets, not even mentioning the 3 or 4 that weren't on there, but I'm optimistic. These took 14 years. Collecting takes time. Some cards, some collections, take more energy than others.

But almost all of them are worth it if you believe in them.
Posted by Jordan at 2:05 PM