We've reached the end of the 2020 Topps Final Edition project. These 6 cards are the last of the set, we end at 330 like a normal Topps release should. It took us 5 months to get to this point, and I hope you enjoyed it all. It really was fun to give some of these under appreciated 2020 seasons their due, and to do the dirty work that deadlines and red tape prevented Topps from doing last year.

Will I do a version for the 2021 set? Well...I'm not thinking Topps will have as many missing card opportunities this year, as they actually seem to be depicting players in new uniforms in Update. It may just be like the last few recent years and they may leave the traded players out of Update due to a print deadline, so if so, I'll just tie that into the Topps Cards That Should Have Been project, which I do plan to resume relatively soon.

Enough talk- here are the last 6 cards of the 2020 Final Edition set: 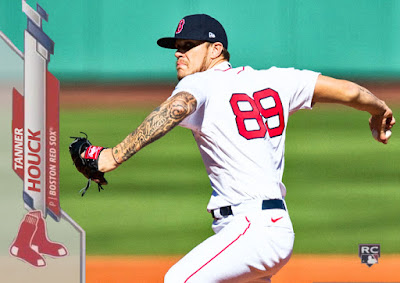 Card #325- Tanner Houck, Boston Red Sox
Two pieces in the last month of the 2020 Boston Red Sox season directly foreshadowed the upturn the team would take in 2021. One was Nick Pivetta, who we've already discussed. The other was Tanner Houck, a highly prized rookie call-up who made three staring appearances in 2020, and was nearly untouchable, winning all 3 games, allowing only 1 earned run and striking out 21. It was the first look at what could be a huge piece for the Sox going forward, albeit a piece the Sox don't know what to do with this year, with a much better rotation on their hands. 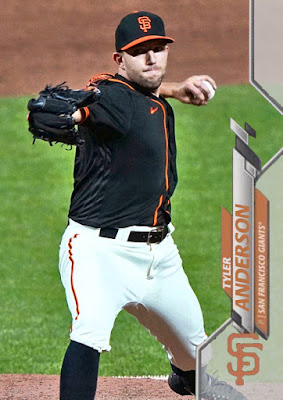 Card #326- Tyler Anderson, San Francisco Giants
2020 was Tyler Anderson's first season out of Colorado, where he'd been an impressive starter for several seasons. Anderson was a late addition to the Giants rotation, and was a decent choice for their season, with a 4.37 ERA and 41 Ks in 13 games. Nothing too showy, nothing too bad either. Anderson found himself in Pittsburgh for 2021, and has been similarly unlucky with game outcome but better with strikeouts. 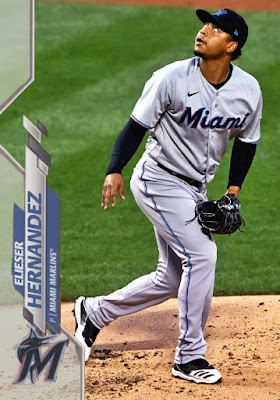 Card #327- Elieser Hernandez, Miami Marlins
After being an uneven choice his first two seasons in Miami, Elieser Hernandez suddenly became a much-needed presence in the Miami rotation, with a 3.16 ERA in 6 starts, with 34 Ks as well. It was a breathtaking come to prominence for Hernandez, which made the eventual injury all the more heartbreaking. Hernandez was a piece that was in the Marlins' arsenal for 2019, which makes his exclusion from 2020 Topps puzzling but understandable. 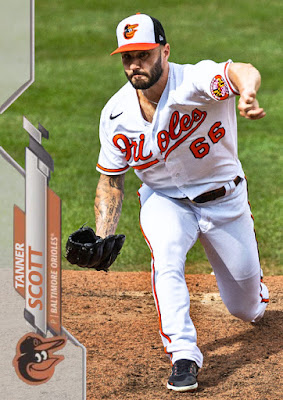 Card #328- Tanner Scott, Baltimore Orioles
Another puzzling exclusion, Tanner Scott has been a consistent relief piece for the Orioles since 2017, and had a decent season in 2019. Maybe Topps just can't get themselves to enjoy great relief pitching. Scott was a great relief piece in 2020 as well, with a 1.31 ERA in 25 games, and a 1.065 WHIP, some of the best numbers of his career to date, and consistency in an inconsistent year for the Baltimore bullpen. He's been similarly strong in 2021, thankfully. 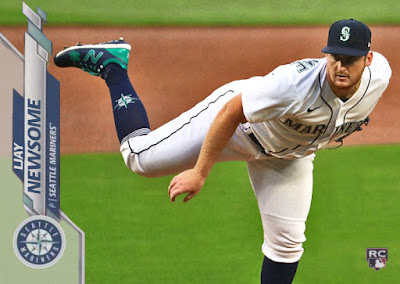 Card #329- Ljay Newsome, Seattle Mariners
Ljay Newsome haș been bopping around in the minors for the Mariners for a few years, and finally got a callup as a starter for 2020. In 5 games, he had a 5.17 ERA and 9 Ks, which isn't a great showing, but as a late-season innings eater and occasional opener for a struggling Ms team, he did what he could. He's been similarly shaky this year, but such is Mariners baseball at the moment. 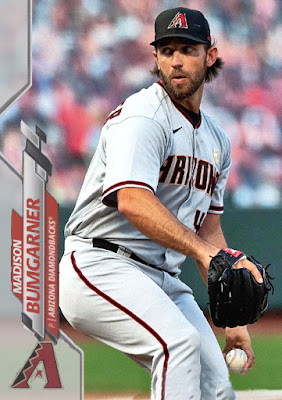 Card #330- Madison Bumgarner, Arizona Diamondbacks
Yeah, let's just say that in an alternate universe where Topps puts out this set, they also get the rights to make Madison Bumgarner cards again. Either way, this is still a breathtaking statement for a last card, Topps or no Topps. MadBum's first season in Phoenix was...shaky. A 6.48 ERA with 4 losses in 9 starts, shortened by an injury? Yeah, that's...not exactly what the D-Backs signed up for when they gave him that contract. Bumgarner has had glints of his former glory in 2021, including that 7-inning no-hitter, which...as I write this, was their last road win, but is mostly bogged down by his depleted control and high-run days. Still...wouldn't it have been nice to see him on a Topps card again last year? It may never happen, but it can in my world.

Thank you for sticking with me through this whole project, hope you all enjoyed it. Topps Cards That Should Have Been resumes next week.