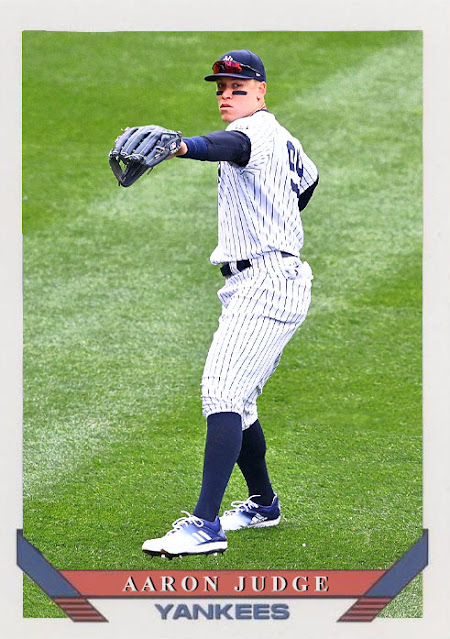 6 games out of first. 5.5 games out of 2nd. Stuck in third, hoping the momentum changes. Being a Yankee fan didn't used to be this difficult.

The best news of this recent stretch is that the Yankees are still perfectly capable of sweeping Toronto. Three-game sweep, fun stuff all around. But a lot of these recent games have also been very close, with a number of ties needing to be broken up by walk-offs, and that's not really the kind of dominance we were all thinking the Yankees would need to rely on this year. The Yankees have some of the best hitters in the game, and some of the best pitchers in the game, all pretty much in their prime- this shouldn't be close. And yet the Red Sox and Rays are substantially better than us.

The one criticism of these teams is that we've never been able to get Aaron Judge and Giancarlo Stanton hot and healthy at the same time. Right now, neither one is especially hot, and both have worked interchangeably. Stanton will have a big week while Judge is either hurt or cold, then Judge will get hot while Stanton's on the IL. Now neither are especially hot and Gleyber Torres and Gio Urshela are running the team. Gary Sanchez still has 10 homers, but once again he's refusing to hit for average. Same with recent call-up Chris Gittens, who certainly was able to contact-hit in Scranton.

And in terms of the pitching, you're waiting for Jameson Taillon to find his groove, and it's just not happening. He's still getting lit up all the time up there. German, Montgomery and King at least have gotten comfortable up there, but I don't know how much longer Cashman's gonna want to stand Taillon just refusing to pitch like he once did. Gerrit Cole is still hot, but you really have to worry about the spin rate issues, and the fact that he was clearly using some substances that are now being monitored by the league. So unless he figures out how to retake his grip and get back to his usual nastiness, we may lose hold of HIS best years as well.

At the very least, the Yankees did have a very nice win over Oakland yesterday, and are in position to keep rolling along with the Royals coming up afterwards. But I don't know if this team is capable of taking first, or being anything other than a wild card candidate. They need to prove me wrong one of these days.

Coming Tonight: The other half of the former Atlanta rookie duo who's still scorching the league up.