Ozz: The Great and Powerful 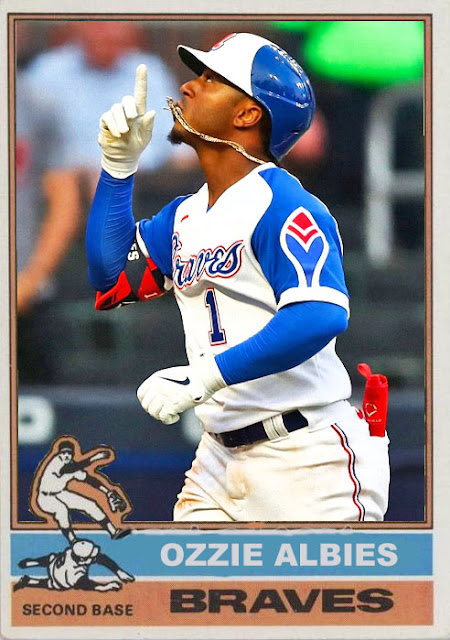 So. The Braves still haven't completely sprouted wings yet.

I wish there was a real solid answer as to why this team hasn't exactly lived up to the expectations of fans, sportswriters, and themselves, but even with some of the best performers in the game right now under their wing, the Braves are still in third in the NL East, below .500, and behind the Philadelphia Phillies. This is not a good place to be. At all.

Additionally, the Braves are in the midst of series' with the Cardinals and Mets, and have some more tumultuous opponent work before they get to a pretty breezy pre-ASG run. So the goal is to not have the Mets humiliate them, even if the Mets are several games over .500, have a better pitching staff and have more upward momentum.

If I sound like I'm being particularly harsh towards the Braves right now, it's because the Sixers play the Hawks in a bit and I'm really dang nervous that the Sixers might get trounced again before they even get to an understandable place to lose.

Well...Ronald Acuna is still one of the best players in baseball, and he has 18 homers, 43 RBIs and 15 stolen bases, all making him imperative to both the Braves and baseball. Especially baseball- we need more people like Ronald Acuna. Thankfully his rookie battery partner Ozzie Albies is also having a nice season, getting a lot of ASG voting traction, and also has 43 RBIs. Albies is 24 [CRAP HE'S YOUNGER THAN ME], and he's established himself as a steady 2nd baseman bat that can also do really well defensively. He has the several-dimensional stuff that you don't hear about a lot in Acuna's shadow, and he's worth a great chunk of the publicity.

This is also just a really nice season for this lineup- pretty much everybody is aligning, the stragglers, like Freeman and Swanson, are heating up, and the bench is supplanting this unit pretty well. We may not have Marcell Ozuna and Travis D'Arnaud right now, but this is still a relatively contact-friendly bunch.

Now, the starting rotation still needs some work, everyone except for Ian Anderson needs to work on keeping runs down, and Tucker Davidson picked the exact wrong time to land on the IL. And that whole factor is spoiling what could be a decent come-up for the Braves. Even the bullpen feels a little messy this year, and only Luke Jackson has an ERA under 3, which is kinda scary. Will Smith is still efficient enough in the ninth, but he's not delivering what the Braves had in mind when they signed him.

So...the Braves are kinda stuck in this rut. Trying to figure out how to get out. Coasting a little on Acuna and Albies. I hope they figure something out. In the interim though, go Sixers.

Coming Tomorrow- Two-time all-MLB hits leader, currently leading in steals, still one of the reasons to come to a game at the K.