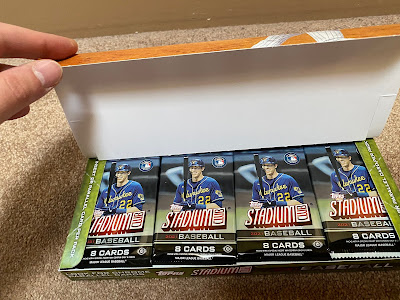 Yesterday, I threw down the first 8 packs of my 2021 Stadium Club box. Some decent inserts, some awesome base cards, but none of our promised 2 hits yet. Typically I pull farmhands I've never heard of, or players for teams I don't like, but last year my luck began to change, with a Rhys Hoskins insert auto #'d to 10. So maybe these ones will be more like that.

Onto the last 8 packs: 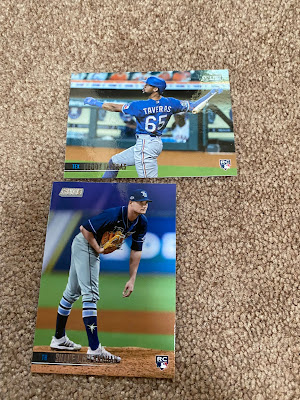 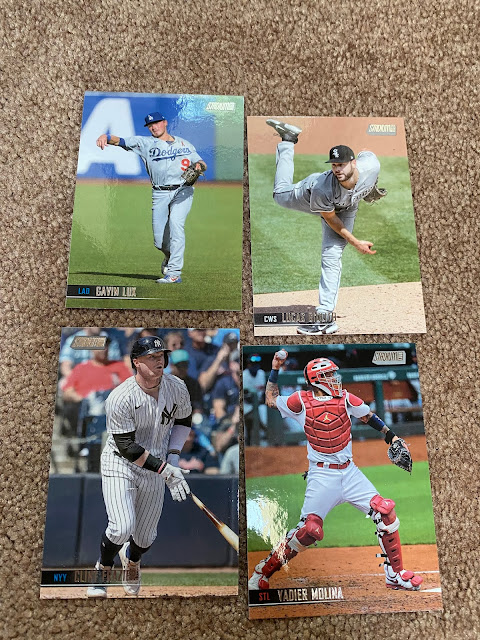 Now we're back in business. Fairly basic shots, but a Frazier for my Yanks collection, and a Molina for my future HOFers binder. Lux and Gio aren't too shabby either. 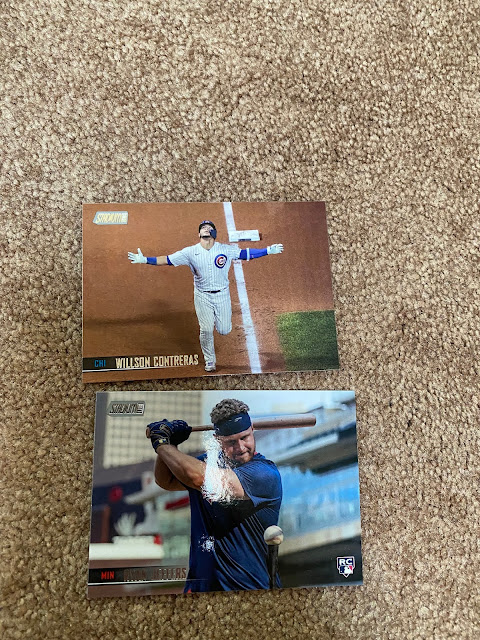 And these two are the best shots in the pack. GOSH THAT CONTRERAS. That is MASTERFUL. Even the Jeffers looks dramatic. This is why I love these sets. 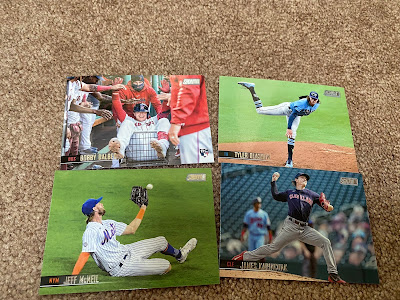 Pack 10- The Dalbec was our box topper, but these three horizontals aren't too bad either. Glasnow's is a Spring Training one, and I like McNeil's slide. 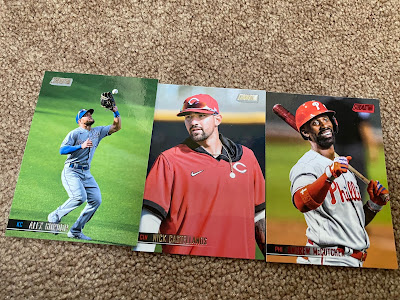 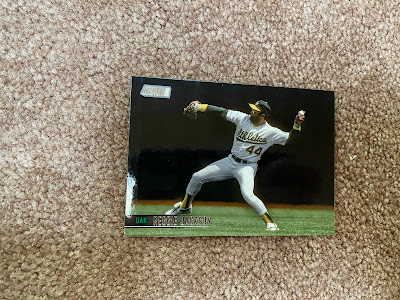 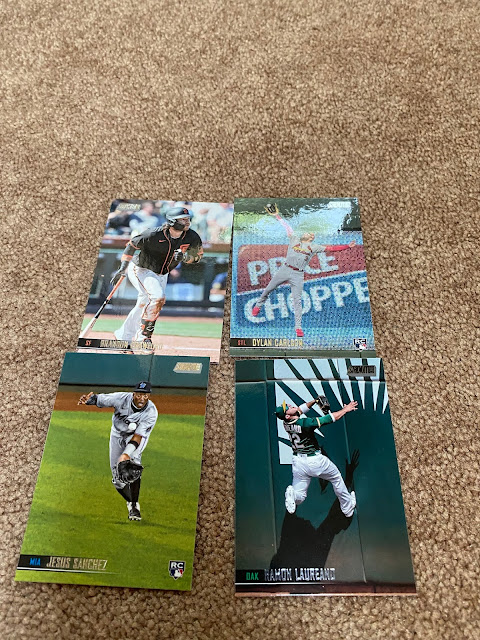 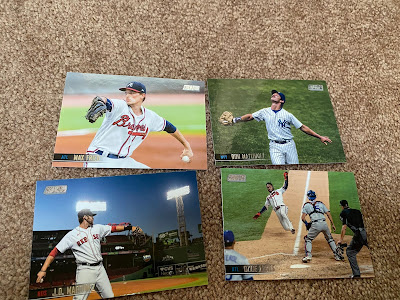 And some killer horizontals all around. That Albies is a classic SC wide shot, and I'm glad they've gotten back to it. The Martinez and the Mattingly seem to have the same theme. Fried's is a cool horizontal as well. 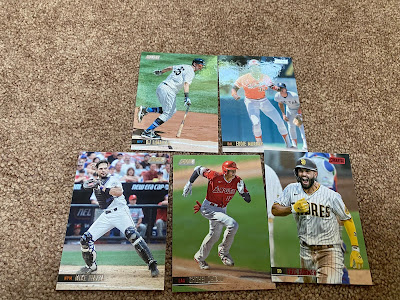 Pack 12- There is some really good stuff in this batch, including HOFers like Mike Piazza and Eddie Murray, and favorites like Ohtani and LeMahieu. They're just all kinda basic verticals. 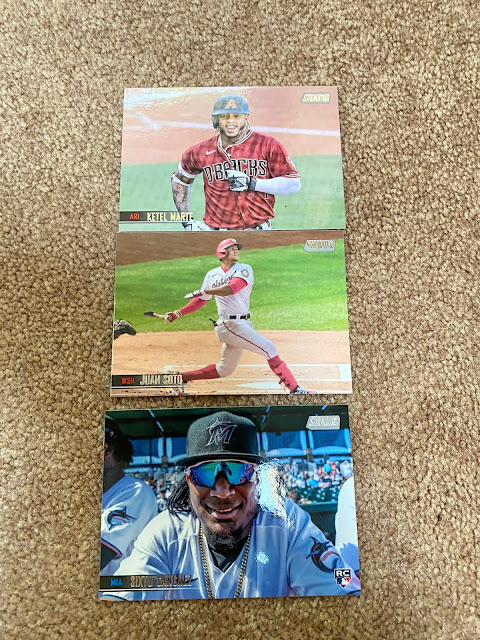 And some more awesome verticals. The star power in this pack alone is insane. And yes, I am a fan of the Sixto card. I'm still waiting patiently for him to get activated. 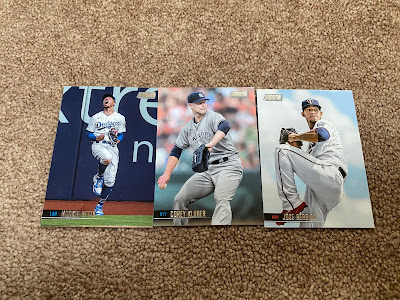 Pack 13- Mookie Betts, our presell sheet boy, Corey Kluber as a Yankee, and a beautiful Berrios. And we're just getting started. 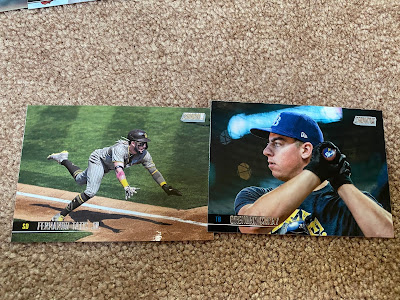 Both of these two are awesome, and dramatic, even if McKay isn't deserving of a shot like this yet. Tatis definitely is. 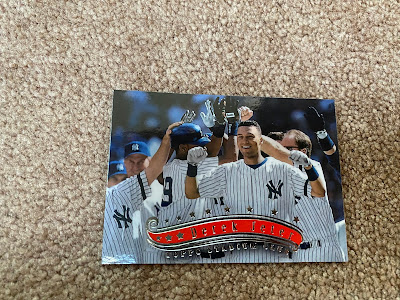 This Jeter is part of the reprint retrospective SC is doing this year. I have this card IRL, but sure, I'll take a reprint of it. You never see much 1997 SC anyway..
Oh yeah, and we got our first hit in this pack, too: 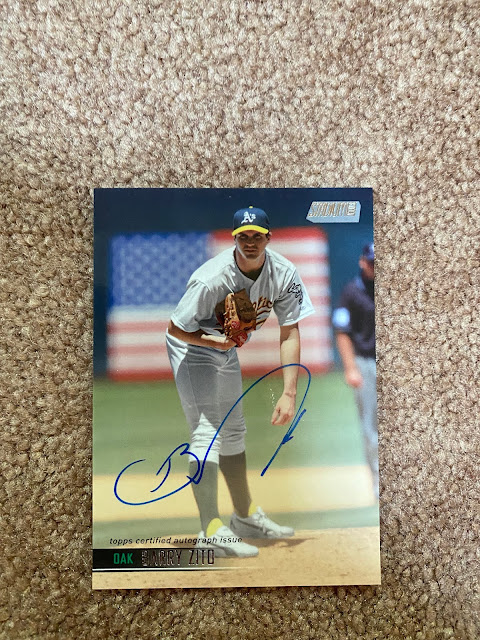 Yeah, honestly I think I did pretty well.
Barry Zito has become a legend prestige pick for Topps since his retirement, and has been in modern products quite a bit. He was an incredible pitcher in his prime, and I saw him pitch a gem in San Francisco a decade ago. So I am very much down with pulling an auto of him. No complaints here. 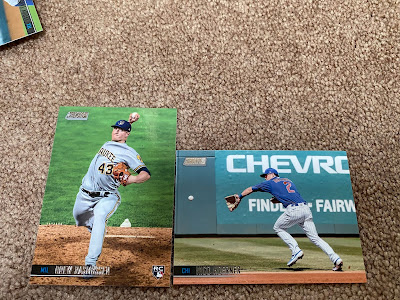 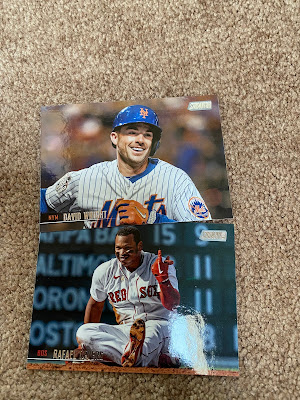 I love both of these, happy static shots. 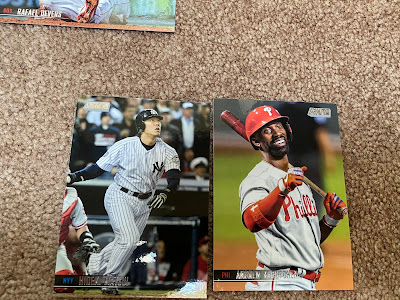 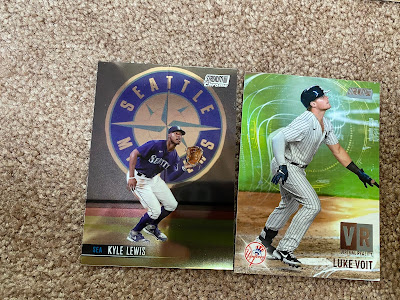 My one-per-box Chrome parallel was of ROY Kyle Lewis, with a wonderfully posed shot. And I pulled a Virtual Reality insert, which I love the design of, of my main man Louis Linwood, LUKE VOIT. Good to see him heating up again as I write this. 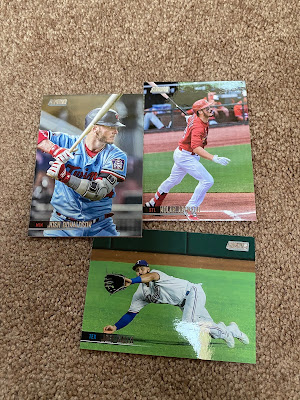 Pack 15- A dupe, a ARENADO CARDS CARD from his first Spring Training game as a Cardinal, and a Joey Gallo. 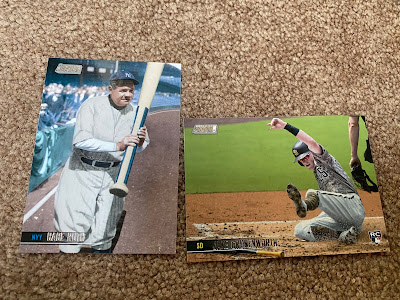 I love both of these cards. That is a big bat for Babe, and Cronenworth needed the whole horizontal card for his action. 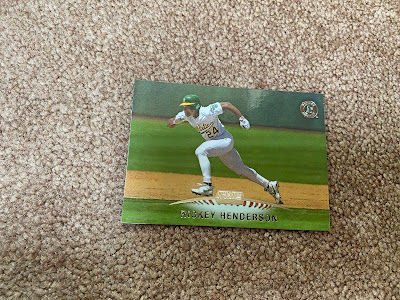 Another SC reprint of 1999 Rickey Henderson. I actually don't have the original version of this somehow, and will gladly take this.
And we got to our second hit: 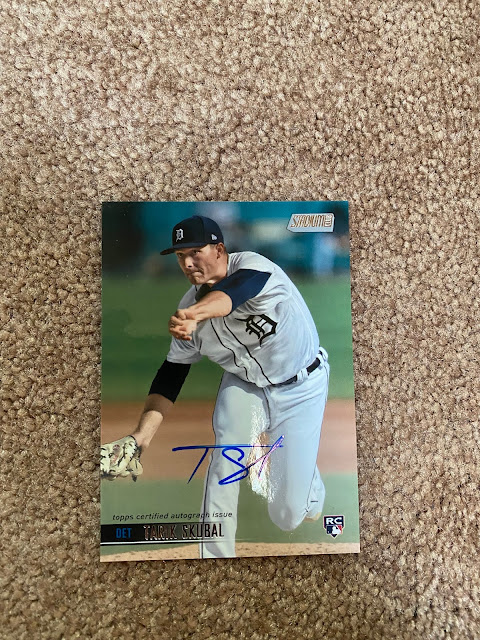 Not as good as the Zito, but Tarik Skubal certainly isn't bad. He's struggling a bit so far this year for the Tigers, but he's primed to be a part of a Hydra-esque youth rotation formation with Mize and Manning, and so I have high hopes for him. Not a bad hit, and this could aid me if he gets really good. 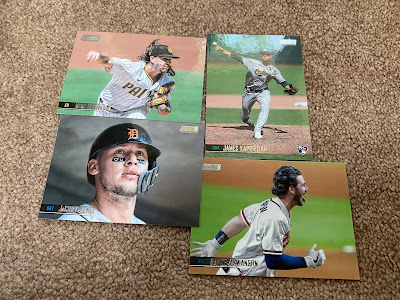 Pack 16- Mismosh of stuff. Happy Dans. Great action shot of Clevinger. Bold rookie choice for Kaprielian. And a very nice dramatic shot of JaCoby Jones, who's since been released. 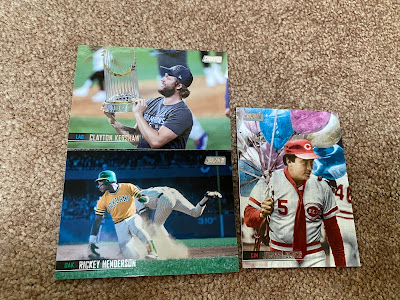 I love all three of these. Kershaw finally gets his trophy. Rickey in 1980 stealing a base. JOHNNY BENCH WITH A TIE AND A BUNCH OF BALLOONS. Again, I love this set so much. 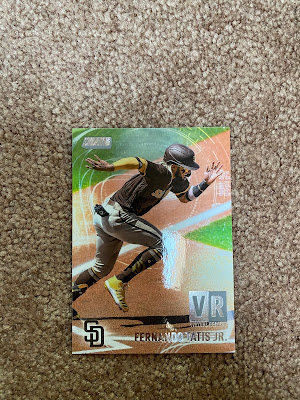 And we end on another Virtual Reality insert of the wonderful Fernando Tatis Jr. No complaints here either.

Yeah, a great box of this. I liked both my hits, there's a lot of great base and inserts in here, and there were only a few dupes. If this is the only taste of this set I get this year, which, knowing the market, is likely, I'm fine with it.