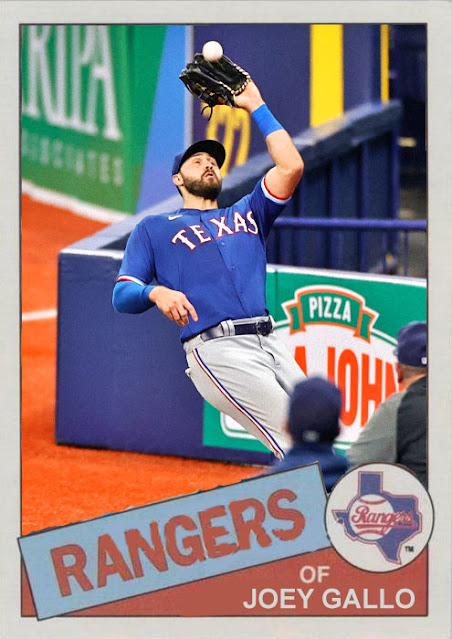 Well, the Rangers got what they were looking for after last season, that being more home run hitters and a working closer. And they're still in last.

Like the Pirates, the Rangers have some definite league standouts this year despite being generally a bad team. Kyle Gibson's still pitching beautifully and has yet to lose a game, Isiah Kiner-Falefa has become a killer infield everyman type, and Joey Gallo and Adolis Garcia's home run hitting has been very helpful in the past few weeks.

But also like the Pirates, the Rangers also have a lot of mehness holding them back. Jordan Lyles and Mike Foltynewicz have had decent starts but still have 5 ERAs. The bullpen has a lot of guys over 5 ERA as well, despite the presence of Ian Kennedy in the ninth [doing well!]. Jose Trevino and Eli White are currently wasting space despite starting roles. With Willie Calhoun and David Dahl injured, there's mobility by way of shrugging and sort of throwing people places. There's also the factor that Joey Gallo might be on his way out.

And look, even though Joey Gallo was an insanely one-sided hitter for a while, he's made a niche for himself as a home run hitter with average abilities. And despite his 136 homers, he's only had one season to date with an average higher than .250. This season he's hitting .225, and even if he has 16 homers so far, he's still...doing his usual one-dimensional thing. And I don't know if it's something that's specific to him or specific to Texas. Like, will trading him to New York or whatever help him? Do teams need another one-sided hitter?

At least Adolis Garcis hits for average, and least you can see him leading a team without compromising his ability to contact hit. At least you can see Isiah Kiner Falefa and Nate Lowe carrying this team and maybe carrying others. But...Gallo hasn't convinced me that he can lift a contender without just doing his usual low-average schtick.

Even if Gallo leaves, it doesn't exactly bring the best of tidings for the Rangers, though. This team does possibly have a future, but...it's not certain what it'll take to bring this team back to prominence.

Coming Tomorrow- Pitcher for a team that took a month and a half to get a win on the road.