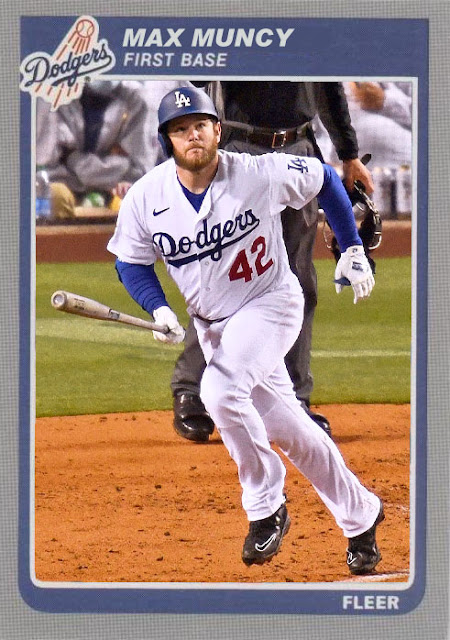 It may not have looked like it at the time, but the Dodgers had a pretty nice May. After the collapse of late April and early May, the Dodgers returned to prominence, winning 12 out of 13 games of the mid-month stress. They've cooled down slightly, and they're still in third, but they're well over .500, right there with the rest of the contenders in the NL West, and just had a huge win over the Cardinals the other night.

With all of this tumult, inconsistency and chaos...the one constant has been Max Muncy. Yes, THAT Max Muncy, the one who absolutely refused to his for average in 2020, and was one of the few lowlights of the 2020 team [he did hit in the postseason, though]. Since the season started, he's been a constant force of power for the Dodgers. He's amassed 30 RBIs, 13 homers and an alright .268 average. He also leads the team in OPS and WAR. Max Muncy is doing this. Not one of the big stars like Mookie Betts, Trevor Bauer or Clayton Kershaw. MAX MUNCY leads the team in WAR.

Not that those other guys aren't killing it right now. Betts is slightly less of a contact player this year [.264], but he's still got a 1.9 WAR, and is still an integral part of the team. Bauer is clearly at peak material, with 6 wins and 96 Ks alongside a 2.24 ERA. And Kersh is still Kersh, with 7 wins and a 3 ERA.

But the takeaway, even now in 3rd, is that the lesser pieces are lifting this Dodgers team. Gavin Lux is finally playing like a pro, with 25 RBIs despite some average issues. Chris Taylor and Justin Turner are still integral infield pieces while still hitting for average. Walker Buehler is still a great starter who's overcome some recent struggles. And Albert Pujols is a tremendous bench bat. I'd love to see Pujols and Pablo Sandoval face off [and that's gonna happen soon enough, heh].

The Dodgers are still a great team. They have competition like never before, and are using this season like a marathon, not getting too confident too early, and looking towards the stretch to really spring into action. I sincerely hope it works for them.

Coming Tomorrow- FORTY ONE YEARS OLD. Still mowing them down.