Number Eight, or Number Seven if You're Being Technical 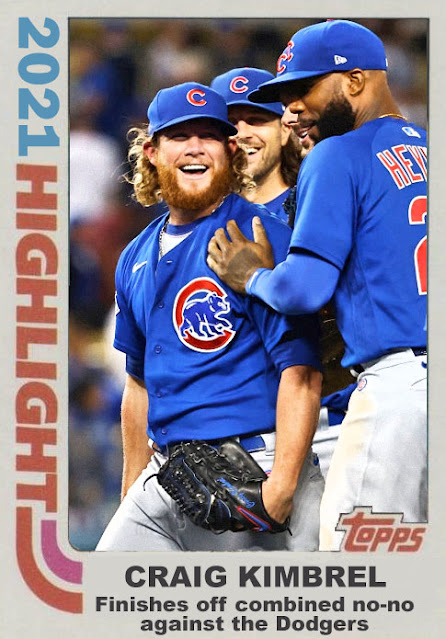 The painful thing about making this highlight custom is that it leaves out Zach Davies, Ryan Tepera and Andrew Chafin, the three Cubs pitchers who sailed through the first 8 innings without allowing a hit against the fearsome Los Angeles Dodgers, sporting three former MVPs among them [Pujols, Bellinger and Betts], and still climbing up the standings to fight in the NL West race.

Kimbrel got the photo cause he finished it off, but Davies, Tepera and Chafin deserve equal credit. The Cubs' bullpen is an absolute beat right now, and once they let the 'pen have the game, I sort of figured the no-no would keep rolling. What, Tepera's been awesome this year, Chafin's been stellar, and Kimbrel's having a massive comeback year. So...it was likely.

I flipped on the game at the ninth inning, watched it down. It sucked that Pujols broke his career no-hitter-less streak [no team he's been on has ever been no-hit until now], but it felt good to see the Cubs pitching prevail, even on a road trip.

Now. I did predict 2 no-hitters for the month of June, so we have 5 more days for another one to pop up. I really hope Manfred's substance meddling didn't ruin this one.