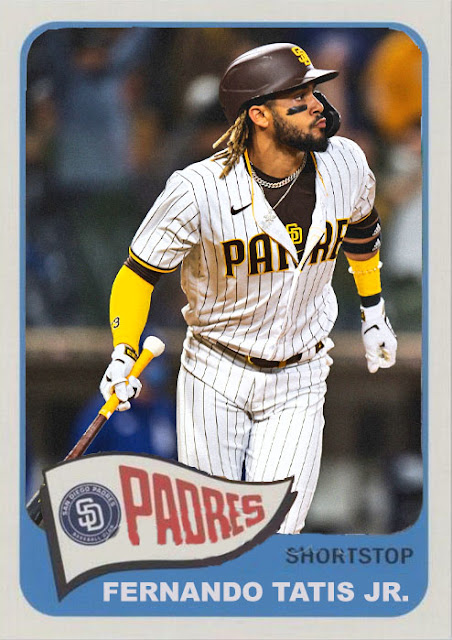 Alright. How about May? Not quite the barn-burner that April was, but some good things happened here. A lot of fun stories, and a lot of evened out pictures of how the rest of the season might go.

First thing we do here is we cover the five predictions I made in April, and we see if they had any water:

1. A clear frontrunner in the NL East. Either the Mets, Phillies or Braves...just pull ahead and save my suspense. Well...we're not really there yet. Those top 3 are still kinda close together, even if the Mets are ahead by a few. I'm not calling them a runaway yet.

2. The second the Marlins bring Sixto Sanchez back up he's gonna start throwing fire and pulling them away from Washington. This still hasn't f&I&T$in happened yet...

3. One of the Cardinals, Reds and Pirates to decide to chase the Brewers. Or maybe more. Uh, yeah! I was very wrong in leaving out the Cubs, cause they were crappy at the end of April, but those Cardinals caught fire and took the division like it was theirs to begin with.

4. One of the big cinderella teams [Royals, Red Sox, Mariners] to still be the real deal, while one or more of the other two revert as the month goes on. Yes, this is exactly what happened. The Royals and Mariners meekly went back down to third, and the Red Sox are still in the three-man race for first.

5. Monumental rookie call-up that shakes the balance of an entire division. Weeelll....Jarred Kelenic was a huge rookie call-up, but he hasn't exactly been the make-or-break figure the Mariners were hoping for. So, no. We're at 2/5

1. The Fall of the Los Angeles Dodgers. This was an early-May event that shocked the world, as the Los Angeles Dodgers slid to third after several missed series and injuries bogged them down. On May 9th, they were 18-17, just a hair over .500, limited to four hits against the struggling Los Angeles Angels, and handing a rare loss to Trevor Bauer. While the appearance of other great teams in the NL West is not surprising, and the Giants and Padres had some big moments in May as well, the fact that the Dodgers, once thought unsinkable, sunk to nearly-sub-.500 in this period was a shocker. They have eventually fought their way back and nestled into 2nd behind the Padres, but it was a dark period that the league was blindsided by.

2. Adolis Garcia. Yes, the Rangers' rookie outfielder had a decent April, but by May he was a league-wide standout. His 5 April homers were supplanted by 11 May homers, at one point giving his 16 as the highest total in baseball, in a league that also features Ronald Acuna, Shohei Ohtani and Vladimir Guerrero Jr. While Garcia didn't exactly come out of nowhere [he was a decent prospect for St. Louis for a few years], him going from a nobody to a home run icon in the span of a month was pretty impressive, even for Texas.

3. The Cardinals take the NL central. The Brewers were looking pretty strong at the end of April, with their impressive pitching staff and their decent lineup action, despite injuries. But, of all things, a series with the Philadelphia Phillies sent them on a losing tailspin that lasted the bulk of May, going 9-15 over the course of the month [as opposed to their 16-10 April]. Meanwhile, the Cardinals caught fire this month, powered by the return of Yadier Molina, the impressive seasons from Nolan Arenado and Dylan Carlson, and the majority of the team being on the same page. It's gonna take a really strong force to pull the Cards off of first now, I think.

4. FOUR MORE NO-HITTERS. John Means, Wade Miley, Spencer Turnbull and Corey Kluber all pitched no-nos this month. Turnbull and Kluber did theirs on consecutive days, Means and Miley did theirs a few days apart. Say what you will about ball-deadening and the sport sucking or whatever, but the fact that we got four no-hitters in a month, and they all happened to relatively deserving pitchers, is something. Heck, for John Means it's a gateway to one of the best starts an Orioles pitcher has had in a while, and Means himself would have been in this category had he not also had a great April.

5. The Mets' injuries. Typically, the Yankees are the team that gets entirely too banged up by the end of May, and this year the New York Mets have taken that mantle from them. Going into June, they will be without Michael Conforto, Kevin Pillar and Brandon Nimmo, their entire starting outfield, as well as Pete Alonso, Jeff McNeil and J.D. Davis, 3/4ths of their starting infield, two of their backup bench pieces, Luis Guillorme and Albert Almora, AND THE GUY THEY CALLED UP TO SAVE THE TEAM, JOHNESHWY FARGAS. Something has gone horribly wrong with this team, and yet they are still in first. And the big star that is still healthy, Francisco Lindor, still isn't hitting.

And the antithesis, 5 Things From May 2021 That I Probably Could Have Predicted

1. Mariners fell apart. Yes, they tend to. They're a bit beaten down by injuries right now, and have been very unlucky with the majority of their bullpen, and even Jarred Kelenic hasn't given them much of a boost. With the Astros and A's in good shape, this was bound to happen.

2. The rest of the AL East caught up to Boston. This is not a mark on Boston, I'm glad they're doing well...but I knew that there was no way that the rest of the division would spend the remainder of the season far back enough to not catch the Sox. The Yankees and Rays are battling with them now, and the Rays have lapped them, making June a make-or-break month for all three teams.

3. Shane Bieber leading the league in strikeouts. And he's the first pitcher to break 100 Ks this season. Yeah, I'm not exactly shocked, sorry to say.

4. The most competitive divisions in baseball being the AL East and the NL West. The sportswriters called that one in February.

5. Tony LaRussa and Joe Girardi causing shit-storms. Of course LaRussa is gonna start shit with one of the most progressive rosters in baseball. Of course Girardi is gonna get the Philly fans in a tizzy by allegedly clashing with Jean Segura and lying about Bryce Harper's health. These two are contentious MLB figures and this is how they operate. The surprising factor is that Gabe Kapler has been pretty calm in SF so far.

Five Most Important Players of May 2021:

1. A Nationals-type team that isn't currently in the conversation comes to power and controls the talking points of the game.

2. A candidate in the AL East and NL West races is either eliminated or has a crappy enough month to leave the race momentarily.

4. A middling team decides midway through the month to start tanking and selling, and it comes as a shock to lots of people.

Coming Tonight: Took him a bit to get back from the IL, but having him back in the lineup makes things more difficult for the AL East race.