The Strife of Pablo 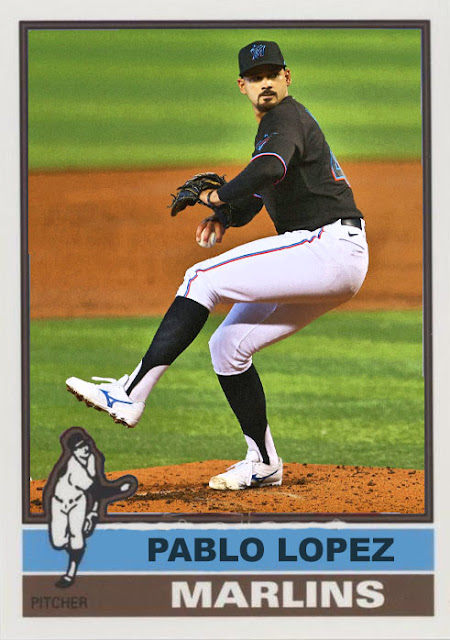 The last time I talked about the Marlins, I called them the most stupid-fun team in the league. This still rings true, and the Marlins still have a very one-dimensional roster with a few contact heroes sifting in [Jazz Chisholm, Starling Marte, Corey Dickerson]. But...what's been the most surprising factor of this 2021 Marlins team has been the shockingly smooth pitching we've seen so far.

Like...this is a fourth place team. Sandy Leon is the starting catcher. The two marquee heroes from last year are both hurt. The farm system guys from the past two years are now inhabiting other rosters. And yet...the combo of Sandy Alcantara, Trevor Rogers, Pablo Lopez and Cody Poteet has been STUPEFYING opposing offenses. Rogers has been the more talked about arm, but Lopez is having his second consecutive strong season, with 68 Ks and a 2.82 ERA. Alcantara has been a bit shakier, but he's still got a 3 ERA and 68 Ks. And while Poteet has calmed down in his last start, he's still a pretty sturdy young arm who's added a lot to the rotation.

All this while John Curtiss continues his nasty stuff from Tampa last year, Yimi Garcia does a surprisingly nice job in the ninth, Anthony Bender comes out of nowhere and refuses to give up any runs, and the entire bulk of the bullpen, including Adam Cimber, Ross Detwiler, Dylan Floro and Anthony Bass, deliver strong enough stuff. This pitching staff is pretty well-oiled, and is befitting of a much better team.

Meanwhile, Lewis Brinson still can't hit for average, Jon Berti's magic has worn off, Duvall's high-power stuff is really one-sided, and this is not a full lineup that can account for a postseason run like last year's could. So the pitching is trapped behind inevitability, as well as the top 3 in the East. I wish it was easier, I wish it didn't need to be this soul-crushing, but this is where the Marlins are.

Coming Tomorrow- The good news is he's recovered from his early slump and is now pitching really well. The bad news is his team's still in last.