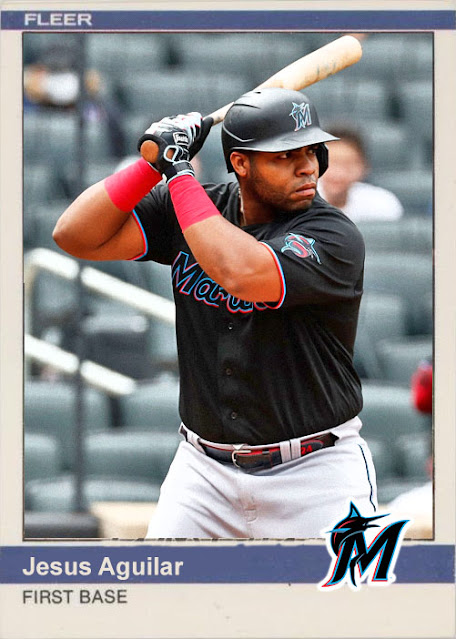 As I write this, Jesus Aguilar has 12 home runs and 50 RBIs on the season. Coincidentally, this was the same amount of power numbers he was pulling in 2019 by the time he was traded to the Tampa Bay Rays. The difference is that then he was hitting .213, and it was late July, and he's already amassed those numbers by June this year and is hitting .260. So he's learned a little bit, and he's a bit closer to average than he was in 2019, but he's the same old power hitter.

Which, for a purely power-based team like the Marlins, works just fine.

Aguilar, along with Adam Duvall and Garrett Cooper, are providing a great net of power for this last-place Marlins team, fitting right in with the contact-hitting front line of Jazz Chisholm, Starling Marte and Miguel Rojas. Yes, the team is without Brian Anderson and Corey Dickerson right now, but pretty much everybody is hitting between .250 and .300, Aguilar and Duvall have over 50 RBIs, and Lewis Brinson is down in the minors. Everybody wins.

Heck, even the rotation is in pretty good shape. Trevor Rogers, Sandy Alcantara, Pablo Lopez, Cody Poteet and Zach Thompson are all having great seasons with ERA below 5 [only Poteet's is higher than 3], and WHIP lower than 1.038 [again, Poteet is the outlier]. The bullpen is also still pretty sharp, with Yimi Garcia, Adam Cimber, John Curtiss and Anthony Bender all having great years.

So...if all of those elements are working, why the hell is this team in last place?

Well, right now the Marlins just aren't as good as the top of the division, even if teams like the Phillies and Braves are struggling mightily. The Marlins also have the sixth-most strikeouts in the league, and have scored the sixth-least amount of runs in the league. So even for all their flashiness, they still need to get the rest of this lineup going and get everybody else up to speed. Because this isn't necessarily bad baseball, and this team has a lot of performers befitting of a .500 squad. I don't know if it'll happen, but it honestly should be.

Coming Tonight: Another team with the most strikeouts in the league, and an infielder responsible for several of them.