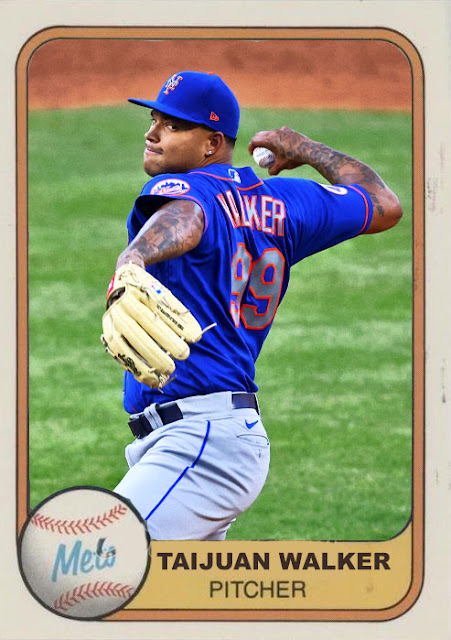 Okay. So the injury issue in Queens is working itself out, it seems. Yes, McNeil, Conforto, Nimmo and Davis are all still hurt, but Alonso is back and mashing, and Pillar is fully recovered from that deadly HBP. And, as always, the Mets are still in first place. Which means...I guess they are, in fact, a really good team.

Although the youth-driven 5-man rotation from the mid-decade is all but dissipated, an incredibly solid 3-man team has emerged that might be the best 1-2-3 rotation punch in the league. Yes, Jacob deGrom is Jacob deGrom, and his singular exploits can't be counted out, but the fact of the matter is that he's backed up two equally-great starters this year. Marcus Stroman's having an excellent comeback year, with a 6-3 record and a 2.33 ERA. Equally impressive is Taijuan Walker, coming off of a stellar comeback year himself with Seattle and Toronto. Walker has a 5-2 record and a 2.07 ERA, and is as durable as ever. Also, it's very hard to tell that Walker is the youngest of the 3, at 28. I always forget DeGrom's 33, and that he only came up in his mid-20s.

Also, DAMN this bullpen is good. I'd forgotten how tight this group was, even with Edwin Diaz being a good closer but not as good as in 2018. Miguel Castro, Jeurys Familia, Aaron Loup, Seth Lugo and Trevor May are all in excellent form, and all pretty much on the same page. Yes, it's sad this bullpen couldn't make things work with Dellin Betances or Tommy Hunter, but they're still strong, and they still have enough good, reliable arms to still get by late.

Also, is the Mets picking up Billy McKinney gonna turn out to be one of the most under-the-radar smart moves of the year? He was listless in Milwaukee, he comes to New York and instantly takes off as a backup outfielder, hitting .302 with 12 RBIs in 13 games. If there wasn't some guy named Wisdom pulling even bigger numbers out of nowhere, you'd be hearing about him.

So yeah, this Mets team is on the right track, playing well, and on a nice streak in the midst of a relatively tricky western road trip, which will lead them to Chicago next against that wise fella. But the troubling factor here is that the Philadelphia Phillies are now over .500, on a hot streak after taking down my beloved Yankees, and headed directly for the top with some western series'. The Mets are far enough ahead to withstand it for now, but they can't rest too hard now that they're playing as well as their record suggests.

I'm just glad the Mets are looking better than they were before.

Coming Tomorrow- Since his 2015 call-up, he's had a cloud of potential around him that he's been unable to escape, and it nearly claimed him this offseason. But, since the season began, he's been pitching better than ever before.