Tuve or Not Tuve 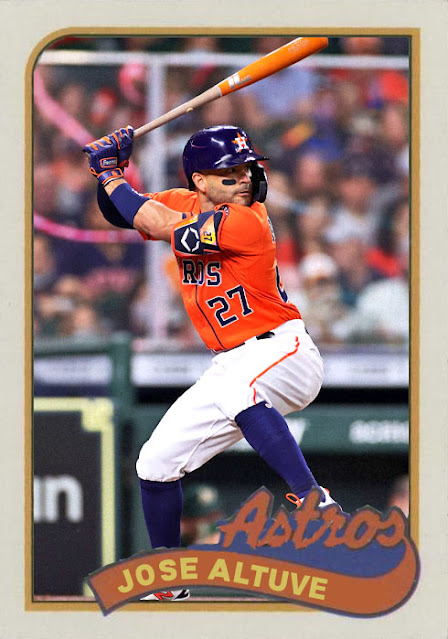 You know, it's never BAD players who turn heel, is it?

Come to think of it, it's always guys who are at the top of their game and really good that are easier to hate, and that take on the fully villainous persona. Jose Bautista embraced it during his Blue Jays heyday. Manny Ramirez graciously became the fun, villainous jester during the 2004 and 2007 playoff seasons. Players like Cody Ross, David Freese, even Brian Wilson, got their reputation for being big, exceptional players whose abilities feel like a smack in the face when they happen to you. It's never happened to anyone untalented, though a case can be made with Cody Ross [that is a joke, for the record].

Jose Altuve's decent into baseball infamy may be the most heartbreaking of all though.

The first stretch of his career feature contact numbers like no one else in the game at the time. 4 straight 200+ hit seasons, 5 straight .300+ average seasons, a 30.2 WAR between 2014 and 2018. These numbers were making Altuve look like a future hall of famer, and one of the most fun 2nd baseman to watch in years.

Then, starting in 2019, Altuve began to instead take after 2nd basemen like Jeff Kent and Roberto Alomar. First of all, he shifts to being a power bat, rakes in 31 homers and only 149 hits. Then, at the end of the 2019 season, it's revealed how much of a stake Altuve had in the stolen 2017 World Series, and the telltale jersey-tug that spoiled the whole thing. And as Altuve is barely even punished for his actions, he decides to play up the infamy and continue his reign. After a weak year in 2020, Altuve returns to glory, with 16 home runs so far, a .298 average, 38 RBIs and a 2.6 WAR.

Altuve is getting good again...specifically so we'll all be forced to like him once more. And if we don't...he can keep being this good, and we can hate him for it. If we don't want Altuve to be Batman, that's fine. He can very easily become the Joker.

And that's where Altuve and the Astros are at. Still good, still a few games behind the A's, still powered by the same, unpunished core that's still good, and still the scourge of the rest of the MLB. Pitchers who are losing spin rate thanks to the tack reparations Manfred is laying down have pointed to his lack of punishment for the Astros as a way of saying that Manfred doesn't have the game's best interest in mind, and I agree with them. What Rob Manfred is doing is making the game more palatable to people who hate baseball, him included. Nobody cares about pace of play, or pitchers getting a good grip on the ball, or how dead the ball actually is. And when something we do care about comes along, like a team legitimately cheating and stealing signs to win a World Series, we're told not to care at all.

Cause this is baseball. Why overthink baseball?, says Manfred. Why take something as something other than face value? Why go against the natural order of all things? If Manfred doesn't punish people who interfere with the sanctity of the game...what does that say about the rest of society? That people will do illegal shit and get away with it because they're rich and talented and that's the way life's supposed to go? Meanwhile, there's people who start from the bottom and do it with honesty and integrity and they suffer and lose out to people like the Astros. Is Manfred saying that they don't matter?

...I'm sorry, this very quickly became about something other than baseball. Or Jose Altuve. But it's all valid.

The game's broken, Manfred's not fixing it, Jose Altuve could see the playoffs again. What does it matter? It's only a game.

Coming Tonight: A happier post, I hope. A sharp pitcher for a team clawing their way back up the ladder.