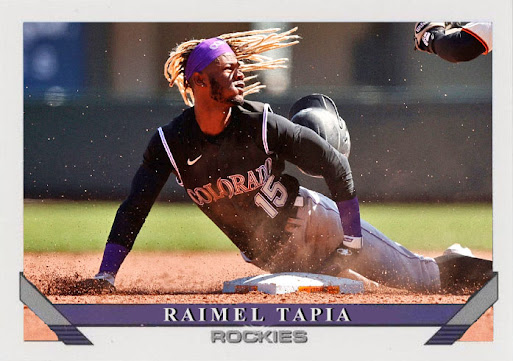 Something strange is going on in Denver this year. And I don't mean Trevor Story getting injured.

The Rockies are without three integral power pieces of 2020- Nolan Arenado [most obviously], Daniel Murphy, and Ian Desmond. Their two other big pieces, Trevor Story and Charlie Blackmon, are either injured or ineffective this year. So this is a team that plays in Coors Field and doesn't have many officially designated power hitters.

And yet...this is still a team that plays in Coors Field. So some contact hitters can just...slowly become power hitters. Ryan McMahon has been the biggest instance of this, he's been mostly a contact guy and is now leading the team in home runs. The other very strange case in this category has been Raimel Tapia, another guy mostly known for high-average work and hits. Tapia has 31 RBIs and 5 homers, while also still leading the team in hits. He's also hitting .280, which isn't like the .300+ stuff that speedsters like Tapia are more prone to. Heck, Tapia's not even leading the team in steals, Garrett Hampson is.

And on the other side of the coin, C.J. Cron, who was signed specifically as a power bat, only has 5 homers and 18 RBIs. True, he may be catching up, but when the power hitter is being outdone by several contact hitters, something's definitely up.

It might honestly just be another hint that this Rockies team really doesn't have its priorities together. The lineup is really just an assortment of people that should be doing well and not all of them are. There's still a web of potential replacement infielders that needs to be untangled before we decide which ones are actually for real. Josh Fuentes is looking pretty damn good this season, but Brendan Rogers and Alan Trejo still want playing time, and lest we forget the specter of Chris Owings' .533 first week hovering over the rest of the season.

The good news is that the rotation has improved a bit, and Marquez, Senza and Gomber are all doing better [still waiting on Kyle Freeland, though]. Daniel Bard's doing a bit better in the ninth, and arguably could be a nice trade deadline chip. There are a few good eggs hidden throughout this team, but for the most part there's a lot of scattered blahness.

And so, while we wait for the next Nolan Arenado to take this team to great heights...we have the 2021 Rockies. For now.

Coming Tonight: Good news, the bats are heating up. Bad news, the one good pitcher's hurt. At the very least, this team's 2020 star is back in full force, it seems.