We reach the last true hero number of the set, hurdle the last 100th post, and begin to head towards the home stretch of this 2020 Final Edition set. Some big guns here, and a few who've already been DFA'd in 2021 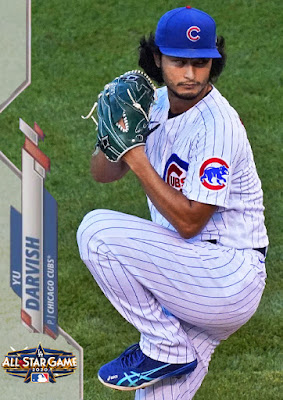 Card #298- Yu Darvish ASG, Chicago Cubs
By the point in the 2020 season that, if simmed correctly, would have been accounting for an All Star break, Yu Darvish was the best, most dominant pitcher in the NL, and was off to one of the best starts of his career. Though he lost traction to Trevor Bauer as the season went on, Darvish definitely would have been the starting pitcher for the NL ASG team had the season played out at a normal pace, and nobody would have argued with it. At 34, Darvish is still one of the more consistent pitchers in the bigs, and may go down as one of the greatest Japanese pitchers ever to cross over. 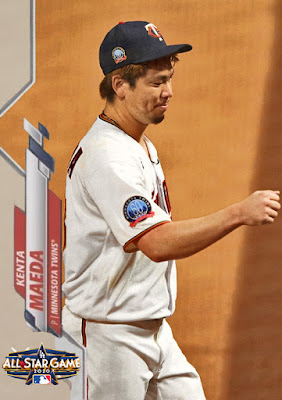 Card #299- Kenta Maeda ASG, Minnesota Twins
Speaking of Japanese players that had incredible 2020s, Kenta Maeda, who, it's very hard to believe, is a year younger than Darvish, would have qualified for his first ever ASG nod, thanks in part to his blistering August with 6 beautiful starts, a 2.39 ERA and 42 Ks. Maeda had control like he hadn't since his rookie year in the states, and led the Twins to great heights. Unfortunately, his follow-up season in Minneapolis hasn't been as celebrated. 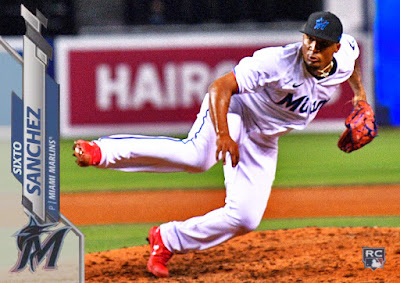 Card #300- Sixto Sanchez, Miami Marlins
Yeah, I think Sixto was a pretty obvious pick for a hero card as well. Going into 2020, Sixto Sanchez was one of the biggest prospects in baseball, and was already a steal for the Marlins having been traded there from Philadelphia in exchange for J.T. Realmuto. Sanchez was called upon to supplant the rotation in August, and was undeniably one of the factors that led the Marlins to the postseason, with a 3.46 ERA and 33 Ks in 7 starts, plus a shutout start against the Cubs during the postseason [despite getting roughed up by Atlanta in the next round]. With Sixto's excellent 2020, it's a saddening factor that injuries and rotation capacity have led the Marlins to keep Sanchez down in 2021. Hopefully he'll be back to his old tricks soon. 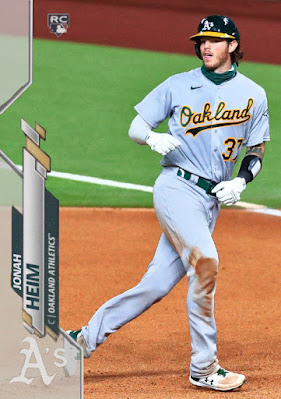 Card #301- Jonah Heim, Oakland Athletics
Despite Sean Murphy's strong season behind the plate for the A's, the A's were lacking in strong backups at that position last year. So after the trade deadline, they brought up Jonah Heim, a catching prospect, and he was decent in 13 games, with good defensive numbers despite a .211 average. Heim was one of the pieces dealt in the trade that sent Elvis Andrus to Oakland, and Heim, unlike fellow trade package-mate Khris Davis, is still on the Rangers, albeit hitting sub-.200 Card #302- Jon Jay, Arizona Diamondbacks
Jon Jay has been with a different team every season since 2016. The former Cardinals outfielder has become a designated defensive outfield replacement who can hit for average if possible. Last season, Jay spent the summer with the Arizona Diamondbacks, a team he'd been with before in 2018. Unlike his last tenure with the D-Backs, Jay struggled off the bench, with a .160 average in 18 games. Jay actually did pretty well with Anaheim this year before being DFA'd and later demoted to the minors. 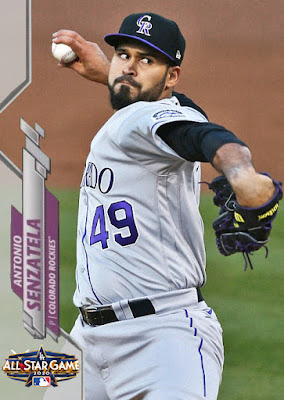 Card #303- Antonio Senzatela ASG, Colorado Rockies
Yes, surprisingly, the best starter in Colorado last year was not German Marquez, nor Jon Gray, nor Kyle Freeland, but their fellow battery partner Antonio Senzatela, who'd struggled in the years since his 2017 callup. Senza's 2020 would have definitely been worthy of an ASG nod, with consistency in the face of injury, and a 3.44 ERA in a snakebitten Rockies climate. He's a bit shakier in 2021, but his 2020 should have been commemorated. 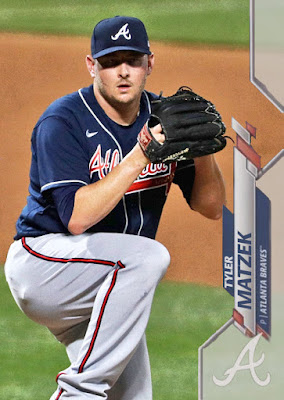 Card #304- Tyler Matzek, Atlanta Braves
Talk about another feel-good comeback story from 2020, the season of many. Tyler Matzek was a former Rockies starting piece who struggled in his first two seasons, then spent a good 5 years in the minors, fighting to come back. After a nice minor league year with the 2019 D-Backs, he was signed by Atlanta, impressed in relief in the minors, and was brought to the majors for 2020. Matzek's 2020 was an excellent one, with a 2.79 ERA in 29 innings, with 43 Ks as well. Matzek also had a 1.09 postseason ERA with 14 more Ks, and a winning outcome against the Dodgers! So far he's dealing similar stuff for the Braves, which will hopefully get nastier as the Braves do. 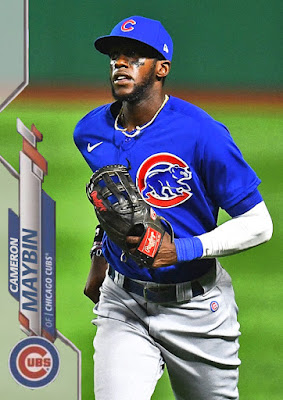 Card #305- Cameron Maybin, Chicago Cubs
Maybin, like Jay, has also changed teams multiple times since 2015. Mostly, because Cameron Maybin often signs with lower-market teams, has great seasons with them, and always is traded to competitors. It happens. EVERY. YEAR. Maybin began the 2020 season with the Tigers, did an excellent job in a starting OF role, and was subsequently traded to the Cubs. In Chicago, he hit .250 with 5 RBIs, and didn't get much done in his 2 postseason at-bats. Maybin did his best in a run with the Mets, but barely got any hits at all. Not sure what's next for the veteran. 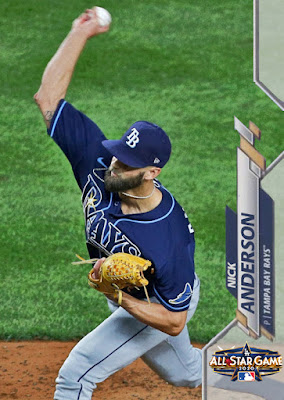 Undeniably one of the best relievers of last year, Nick Anderson definitely would have been called upon by A.J. Hinch as a relief asset for the AL ASG team in a 2020 scenario. Anderson came to prominence as one of the hardest-throwing relievers in Miami before getting dealt to the Rays, getting playoff time, and then having a HUGE 2020 with a 0.55 ERA and 26 Ks in 16 innings, as well as a strong first two postseason series before getting chewed up by the Astros and Dodgers. Anderson's out for the majority of the season, but will hopefully be a strong asset when he returns.

Monday we get the next 9 cards in this set, the third-to-last post of this project. Can confirm 2 big rookies and 1 big traded player.