Living in a Sox 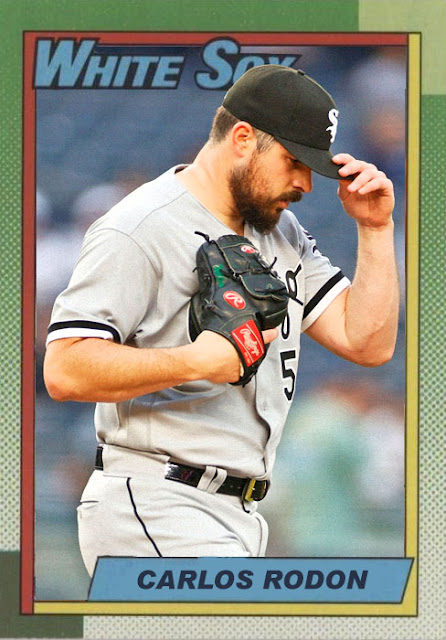 The strangest part of the White Sox' dominance so far is that they've done it without Eloy Jimenez, Luis Robert and now Nick Madrigal, three of their biggest prospects of the last few years, and the prospects we all thought would lead the team to glory. They are still winning without them. They are still...that good.

Maybe it is technically cheating that the White Sox haven't had any major pitching injuries, and have had Dylan Cease and Lucas Giolito come to prominence when they needed them both. But what's even more exciting is that Carlos Rodon, who had struggled for 5 years to live up to what prospectors had foretold about him, is having an amazing season. The no-hitter was the starriest moment, but he's got a 5-2 record and a 1.96 ERA, and a very impressive 88 strikeouts. Regardless of where this control was for the last 6 seasons, Rodon still has it, and I hope he hangs on as long as possible.

What's great about this 2021 White Sox team is that the core of the last few seasons has only gotten stronger. Yoan Moncada is having his best season to date, Tim Anderson is still one of the most fun and consistent contact hitters in the game, and Jose Abreu and Yasmani Grandal are working some serious power numbers. The additions have also helped, and Lance Lynn is having another incredible year, Liam Hendriks has 16 games, and Brian Goodwin has gotten off to a nice start in place of fellow speedster Billy Hamilton. So much of this team is working, even under Tony LaRussa's more old-school tactics.

And yet I still worry about this team's potential energy vs. its actual energy. Look at the Dodgers- we all thought they'd tear it down this year, they're still in third and now backpedaling again. You can see a team with everything, doing well in the middle of the season, and it won't amount to anything. It happens every year. The White Sox could be a World Series team, but they could also be out in an early round.

However, this team is the closest the White Sox have gotten to greatness in a long time. They're better than they were even last year. So I really want this to be the team that does something. And hopefully they do.

Coming Tomorrow- His team may have fallen off the face of the earth this month, but he's still a very tricky contact talent.