Song of the Franchise Man 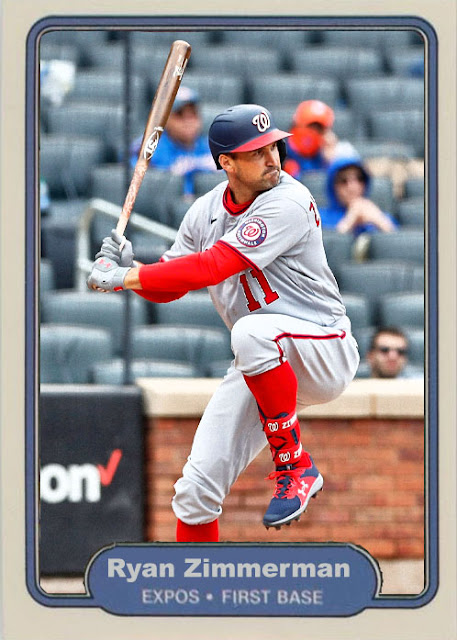 Since Tony Gwynn's retirement, we really haven't had many single players sum up an entire franchise. A lot of people would put Derek Jeter into that category, but there was always someone like Paul O'Neill, A-Rod or CC to balance things out. It was never JUST Jeter. And it was never JUST Chipper Jones in Atlanta, either.

However, Ryan Zimmerman is basically the closest we're gonna get to Tony Gwynn again. Ryan Zimmerman has been with the Washington Nationals since the team got started, and was a rare 1st round draft pick that debuted the year he was drafted. And he has just been the backbone of this team since they started out, being there for the dire points in the late 2000s, and even the playoff-loss era of the 2010s. And even as Bryce Harper and Anthony Rendon left, after the World Series and everything...Zim stayed where he was.

So, after a season off due to opting out of the 2020 season, Ryan Zimmerman has returned to the team that has always essentially belonged to him. And, thankfully, he's been back to what he does best, contact hitting, with a .299 performance, 17 RBIs and 6 homers. There is the matter of Zim being a bench piece full-time now, and being a backup for starting 1st baseman Josh Bell, but as Bell has taken a bit too long to come into his own in Washington, Zim has been a steady offensive presence. It's very cool that the Nationals can still rely handily on Ryan Zimmerman, even in 2021.

This is another blah season for the Nats though, with lots of people like Josh Bell, Kyle Schwarber, Jon Lester and Patrick Corbin that haven't really been worth the money. And yes, the central core of Trea Turner, Max Scherzer and Juan Soto is still excellent, but a team has to be more than its three best players, and despite an improving bullpen, the Nats don't have much else to say this year. Yes, they're edging out the Marlins in the standings right now, but the Marlins have a better rotation and more power hitters.

So while Ryan Zimmerman was able to get a ring out of his 17 years in Washington, he may not get another one anytime soon.

Coming Tonight: Former #1 draft pick FINALLY delivering what the prospectors were hinting at.