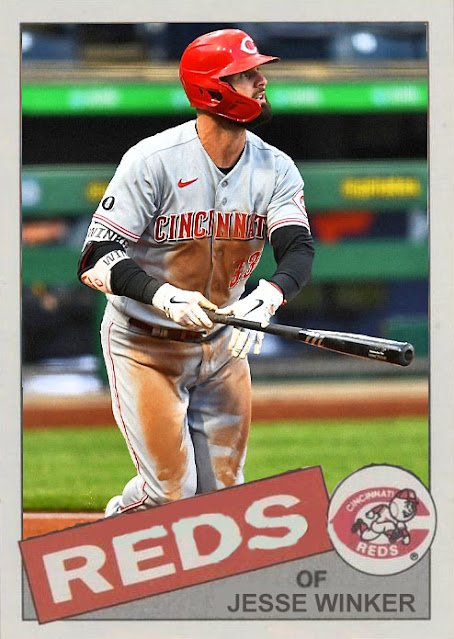 The Reds are one of those classic kind of bad teams, the likes of which I write about almost every year, where there's a tremendous drop-off between the core of the team and everyone else. The Reds do actually have a great deal of people playing tremendously well, in fact they have a few of the best players in baseball right now. Nick Castellanos has one of the best averages in baseball, and might be the best contact hitter in the game right now. YES. THE. I KNOW. It is a far cry from his high-strikeout work in 2020, and it is a wonder to have the team built around him in Joey Votto's absence [he'll be back within the week, I know].

Not only that, but Jesse Winker's having a tremendous contact season as well. Winker is hitting .350 with a team-leading 17 homers and 37 RBIs [not team-leading there, Tyler Naquin has 38]. It is important to note that 3 of those home runs came earlier today at the hands of the St. Louis Cardinals, so I'm really happy with Winker right now. I've always seen Winker as an important power-hitting beacon, and I've seen him walk-off in the past. The fact that he's become a steady contact hitter, and a starting piece, for the Reds is fantastic.

And then you have a lot of excellent pieces like Sonny Gray, Tucker Barnhart, Tyler Mahle, Wade Miley, Jonathan India and the aforementioned surprisingly-jacked Naquin. Also, Tejay Antone has made a name for himself as a long-man and relief specialist, and he's moving up on the team the further we go. And Vladimir Gutierrez has been relatively impressive in his first few starts. There are great pieces, fundamental pieces, and a lot of great people playing well.

But...because the rest of the team is underperforming, the team stays in fourth. Amir Garrett and Luis Castillo are slumping, Suarez still can't hit for average, Votto and Moustakas are hurt, Akiyama's a great outfielder who can't make things work at the plate from the getgo, and Tyler Stephenson is slowly becoming, well, a backup. The outfield isn't as crowded as last year, but the bench is a bit more of a shrug now that a lot of injuries are calling for untested choices. And so there the Reds are, a colossal offensive team that can't make their way out of fourth because the Brewers, Cardinals and Cubs are all rolling.

I sincerely hope for a tide turn, because I enjoy this team greatly. But with such a divide between the top and the bottom, I'm not sure if it'll happen.

Coming Tomorrow- Ironically, another team with a similar drop-off. The best player in baseball is hurt, and yet the fans still wanna see this guy mash.