Mize Beyond His Years 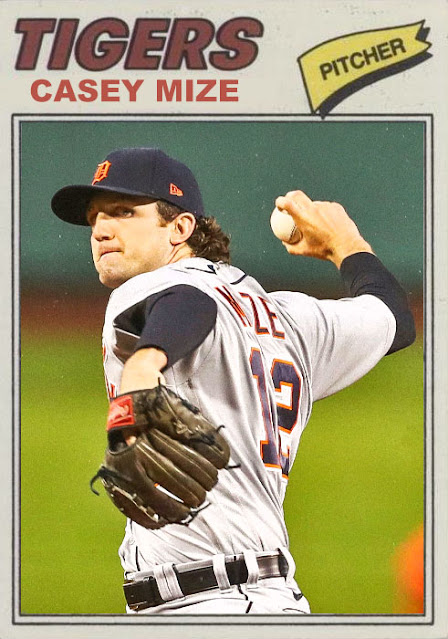 For all of the Mariners fans worried about Jarred Kelenic not being MLB-ready after being sent down to AAA, fear not. Sometimes, it takes players a good year to acclimate to the majors, even if they're one of the highest-ranked prospects in the majors. Just look at Casey Mize. He wasn't great last year, and now in his first full season he's got the highest WAR in Detroit.

And the thing is, no one is shocked. Casey Mize, after being drafted 1st overall in 2018, zipped through the minors, posting a 3.20 ERA in 15 double-A starts in 2019 before skipping Triple-A entirely due to the lack of minor league play in 2020 and going straight to the majors last year. Everyone was expecting big things to happen to Mize, who is only 24 right now and had a pretty nice head start compared to a lot of 25 and 26 year old rookie pitchers right now. And Mize not completely reaching his potential in 7 starts for a last place team in a pandemic-shortened season is...understandable. These are not normal rookie circumstances.

So of COURSE Casey Mize is off to a tremendous start in 2021. Of course he's got a 3.34 ERA in his first 11 starts, of course he's leading the team in WAR, and of course he's even surpassed veterans like Jose Urena and Matt Boyd. When you're talking about a talent like Mize, you have to expect certain things. Mize's control is aiding him greatly this year, and he's allowed the least amount of hits of any healthy Tigers starter right now, as well as the lowest WHIP.

But because the Tigers are still pretty bad, Mize's numbers do take a bit of a hit in some categories, like wins. And this is a Tigers team that still has several lineup issues, ones that have only been partially rectified by the arrival of Eric Haase's bat. It's also possible that Boyd, Grossman, Urena or Michael Fulmer could go at the deadline, and speed the replenishment of this team up quicker.

What's been made clear, though, is that the Tigers intend for Casey Mize to be the first piece of a potential future dynasty. Spencer Torkelson, when he's activated in...say...2023 at this rate, will be another big piece. People like Tarik Skubal, Matt Manning, Isaac Paredes and Riley Greene are going to be relied on to all turn out well, especially as Mize is looking like he's for real right now.

I kind of hope it works out for the Tigers, and I hope Mize stays this good as long as possible.

Coming Tomorrow- Getting this Pittsburgh relief specialist out now before he's traded next month.