Bay it Ain't So 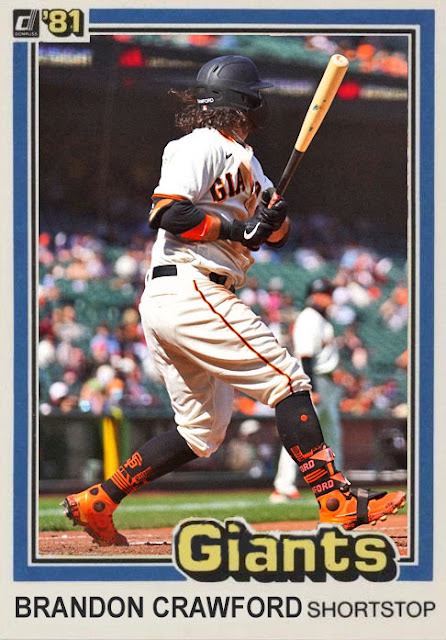 The Giants' 2021 dominance continues. Yes, the Dodgers are crawling back, the Padres are still great, and the injuries are beginning to attack, but...the Giants are still a first place team, and they definitely are still playing like one.

Look at Brandon Crawford. 2020 was a step backwards, but Crawford leads the team in home runs with 15, and in RBIs with 44. He's already topped his last two seasons combined in terms of WAR, and his year is looking very similar to his 2014-2016 career peak numbers. And look, Crawford may not be one of the chief figureheads behind the early 2010s Giants dynasty [I'd say Posey, Bumgarner, Sandoval and Pence count], but he's been a consistently solid plate presence and a 3-time Gold Glover, taking over for 2010 World Series MVP Edgar Renteria [himself only a temporary replacement for Omar Vizquel] to become part of the core of the Giants for 10 years now.

The Giants have a lot of those guys. Brandon Belt's been here since 2010, he's having a decent year despite missing some time due to an injury. Obviously Buster Posey's been here since 2009, he's having his best season in years and is looking at another ASG starting role. Evan Longoria's only been here since 2018, but he's finally playing like his Tampa Bay self [and, also similar to his Tampa Bay self, has gotten injured just when things are getting good]. Johnny Cueto's been here since 2016, and he, at the very least, has been healthy for the majority of the season so far and has a low ERA. The Giants may have unluckily stumbled upon one good year of Cueto's career and a trail-off, but Cueto's at least more durable than he has been contemporarily this year.

And thankfully they're open to new suggestions and new blood. Zach Littell and Conner Menez have started games. Steven Duggar is now a starting outfielder AND is playing well. Three of the best starters have all been cheap free agent pickups- Kevin Gausman, Anthony Desclafani and Alex Wood, all three of which are doing really well right now. Even LaMonte Wade is doing well off the bench.

I do worry about this team's chances as the Dodgers return to prominence, but they're doing a lot of things right, still have a very powerful core, and are heading into three series' against feasibly beatable teams. So the fun may keep rolling on for SF regardless.

Coming Tonight: The AL East has a new frontrunner, and oh my gosh can they hit for power.