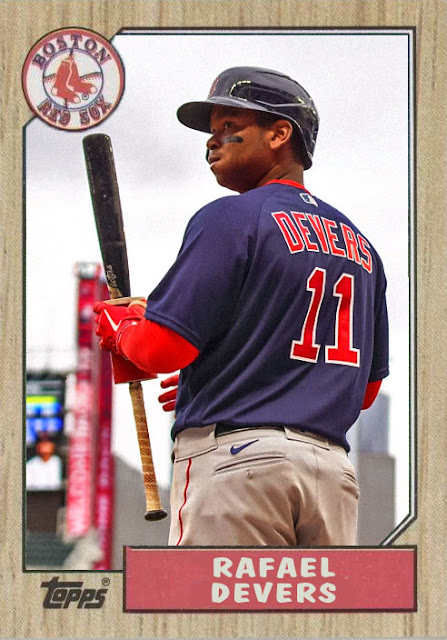 One of the benefits of coming up at age 20 is having enough time for trial and error without wasting precious career time. Not everyone can be Juan Soto and be a star right off the bat. Julio Urias was brought up at 19 and is now a trusted starter for LA. Casey Mize had last year to be wonky and just snapped right into place this year.

Rafael Devers had a season and a half before he hit big, followed by another season of high-strikeout work  that led people to ask if he was for real or not.

Well, Devers' age-24 season is feeling a lot like his strong, all-powerful 2019 season. He's leading the league in RBIs with 48, and in doubles with 19. He has a .273 average, not stellar but better than last year's. He's snapped 15 homers, currently the most on the Red Sox [yes, he lapped J.D. Martinez, who has cooled down since April], and he fits right in line with the contact core of Bogaerts, Verdugo and Martinez. At 24, Devers is finally playing at peak level, and is about to go on an absolute tear if the Red Sox continue to give him a platform for it.

Even more interesting is the fact that Devers' little cousin Jose just came up with the Marlins. Jose is going through the same rookie conundrum that Rafael did- he's 21, grasping at a platform that isn't completely his yet, he's only hitting .250 with 5 RBIs, and he's gonna need probably a lot of the time Rafael needed to completely come to form. But will he be as good as Rafael? Well...if Rafael's gonna be playing as well as he is right now, I'm not sure.

The Sox, while not in 1st, are still in position to contend. They're 1 game behind Tampa, 5 games in front of the Yanks, exactly where they need to be. They did just get beaten by the Astros a bit, a series which I always pray for a tie or a no decision, but they're still excellent, and their biggest pieces are all still intact. So much of how this team is operating is really efficient, and they're looking more revitalized than they have in 3 years.

Again, as a Yankee fan, I have to hope they slip some more, but...they have none of the lineup issues the Yankees do. They will keep rolling unless something physically prevents them from doing so.

Coming Tomorrow [Card Show post coming today, yes I'm going to my first card show since December 2019 today, that's gonna be absolute bananas]: The Mets rotation may no longer be the homegrown monolith it once was...but having this guy surging as the third man certainly isn't a bad thing.