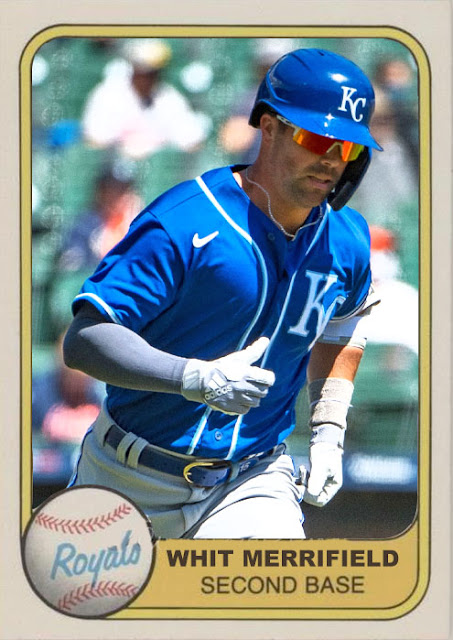 I think the best way you could describe the Royals from 2016 til now is that they have two players with excellent stats and career runs that would be Hall of Fame caliber players if they weren't on the Royals. Whit Merrifield and Salvador Perez. Also admittedly the two players who've really stuck around since the rebuild. So...they like it here, but they don't like losing, I reckon.

Whit Merrifield is, as predicted, having another excellent season. He's leading the league in steals with 20, has 38 RBIs, 74 hits and a 1.3 WAR. Not exactly career height numbers [he's 32], but he's still one of the most reliable performers on the Royals, along with Salvador Perez. The very good news is that Merrifield doesn't have to carry the team solo this year, as a new batch of Royals like Andrew Benintendi, Carlos Santana, Mike Minor and Michael Taylor are helping carry the load and delivering in big-game moments. While this team is admittedly not where it was in April, and looking more like a non-competitive third place team, there's still a lot that the Royals are doing well, Merrifield included.

Possibly the best thing about this team right now is the sustenance of the bullpen core. Scott Barlow, Kyle Zimmer, Josh Staumont, Jake Brentz, Greg Holland and ERVIN SANTANA [I still can't believe he's back] have been consistent, solid, and reliable. Staumont has been taking the ninth a lot recently, and he's been doing pretty well there. Holland's not quite as sharp as he was in 2020, but he's still better than he was before. Zimmer and Barlow are dangerous pieces that hopefully will stay in KC past July. The rotation and lineup are a lot less consistent, have more problematic details...but still have their heroes. Kris Bubic has come through for some nice starts. Salvador Perez has 18 homers. This is far from a bad team.

But, again...the Indians have enough to compete with, and the White Sox are one of the best teams in the league. What the Royals have right now is good to stay out of last, but they have nothing close to the insane momentum they begun the season with. So, once again, we may be looking at an inconsequential, kind of okay Royals team, that's maybe a few steps too many away from competition. Which sucks, but you have to think they could pull something together eventually. And I hope it's soon.

Coming Tomorrow- Even in one of the most bullpen-friendly baseball cities in the game right now, he's still a reliable closing piece that everyone rallies around.