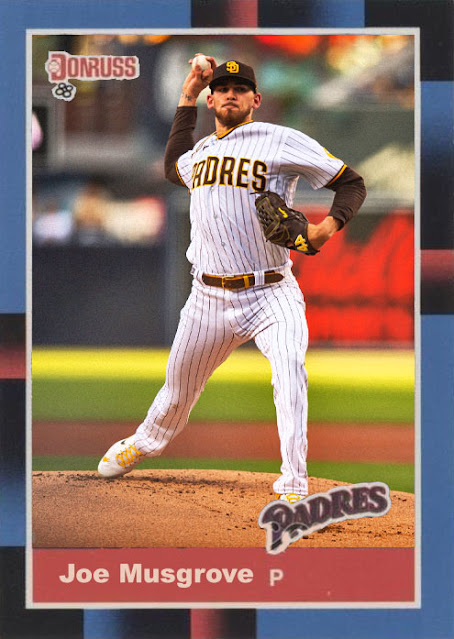 Right now, there are only two third place teams that baseball fans should be allowed to care about. The New York Yankees and the San Diego Padres. For those of you who were about to counter-argue with 'but what about the Cardinals?', you're either a few months early or late.

The San Diego Padres are the best third place team in baseball, because the NL West race is currently as tight as John Kruk's shorts [thank you, Dennis Miller, for ghostwriting that joke]. Any one of the Dodgers, Giants or Padres could triumph in the end, and right now the Padres are in the midst of a series with the Dodgers. Both are fighting for an audience with the Giants for 1st. The Padres have won 5 straight [I'm writing this before the sixth, but it's Kershaw v. Snell so it's not looking great for SD], and the Dodgers have only lost periodically in their last two-week stretch. Both are arcing upwards, and both have a similar number of strengths.

The Padres rotation, though, is still a dangerous asset. As briefly hinted at, Blake Snell's ERA has downturned since his sturdy 2020 season in Tampa, and he's not quite at peak levels. But Yu Darvish is having yet another incredible season, with a 7-2 record, 108 Ks and a 2.50 ERA. The NL Cy Young race may be pretty decided as of right now [if for some strange reason it's not Jacob deGrom, then it's probably Zack Wheeler], but Darvish is once again a league talent and nowhere near slowing down. Dinelson Lamet has gotten back into the swing of things after returning from an injury, and has a 2.81 ERA in 8 starts, though he needs to pick things up a bit. And Chris Paddack, while still chasing his 2019 numbers, is doing a decent enough job with a 4.10 ERA and 68 Ks.

And Joe Musgrove, even after a season peak with that no-no in April, is still a very strong starting option for the Padres, with 98 Ks and a 2.26 ERA. Finally, Musgrove has a team with enough run support to power him through even the weak moments, and his high-K work can be rewarded on a higher scale. As predicted, Musgrove in San Diego is a match made in heaven, and it's even cooler that he's from the area.

So that's pretty much 4/5 guys who are as deadly as reported, and even on crap days, Snell can still strike out a bunch of people. That and a pretty pristine bullpen make for some excellent defensive stats.

Having a nice lineup is kind of an afterthought, honestly. Yes, Fernando Tatis is still one of the best in the league, Machado, Cronenworth, Grisham and suddenly Tommy Pham are having nice seasons, Ha-Seong Kim has fit pretty well into the defensive schematic and Eric Hosmer has 35 RBIs, but a lot of the lineup is just kind of normal, replacement level stuff. Hosmer and Myers aren't doing anything earthshattering, Caratini is still primarily a backup catcher forced to be an everyday guy, and Profar doesn't have the x-factor he delivered on last season. Maybe the trade deadline will deliver an unbreakable piece that makes this team more than just a wild card competitor.

I do believe the Padres could still rock this season, but when the NL West race is still this deadlocked, they need something to come forward and propel them to the top, and nothing's getting them there yet.

Coming Tonight: You bring him to a new city, move his career position, and he still hits over .300 and looks like an All Star.

Posted by Jordan at 8:37 AM
Labels: Custom Cards, Joe Musgrove, Padres, who writes this guy's stuff?