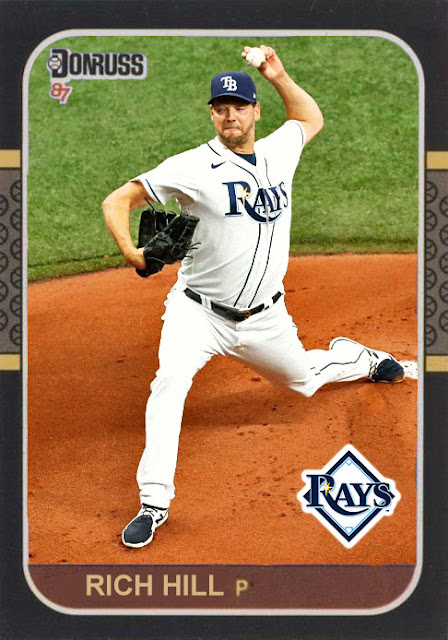 Oliver Perez was still on a major league roster at the start of 2021. He made 5 appearances, gave up 5 hits and a run, scored a 0 ERA, but because he blew one game for the Indians, he was released. He still had some stuff left in the tank, even at 39, and the Indians had no patience for him.

Which means there's currently 4 players left born in 1981 or earlier. Two of them, Adam Wainwright and Nelson Cruz, are still integral members of their teams. Another, Albert Pujols, has become a well-respected bench piece for one of the best teams in baseball.

And what of the only pitcher left in baseball who's over 40? Well...he's earned as many seasons as he wants at this point.

Rich Hill, as I've come to argue, is the American Bartolo Colon. He's been in the league for a few decades, had a period where everyone thought he was done, came back inexplicably for some great teams, and has absolutely refused to stand down ever since. Now, Bartolo Colon's flamboyance is very hard to combat, but I must remind you that Rich Hill is, in fact, from Boston, and once was arrested for disorderly conduct outside Gillette Stadium for attempting to bring a bag larger than regulation into a Pats game. If that's not flamboyance, I don't know what is.

Rich Hill has had a laundry list of arm issues over his 17 year career. They stopped him from having success with Chicago, St. Louis, Baltimore, Anaheim...the list goes on. But by 2015, he had a handle on things, made some beautiful starts with Boston, became a commodity again that the Dodgers had to have, and was a member of one of the best rotations in baseball for 3 and a half years. Even if he didn't deliver on the Cubs' hopes for him in 2007, he still became a trusted starter and a veteran arm, and despite numerous injuries as a Dodger, was still trusted by the end of that contract.

Since then, he's been a steady arm for hire. Did well in Minnesota last year. Now, for the Rays of all people, who've recently brought up a player younger than the franchise, Rich Hill has a 4-2 record, 60 strikeouts and a 3.32 ERA. He's not the story that Tyler Glasnow is, but he's been more consistent than a lot of their pitchers, and he's been a surprise for a very youth-driven team. Forty-one years old and a star for the Rays. Gotta love it.

For everything Hill has been through, I hope he continues as long as he can. If he's still good, and if he can still throw, then he should keep the ride going.

The Rays, meanwhile, have a nice hold on first as the Yankees and Red Sox battle for second, and are making a ton work with a lot of elements failing them. Randy Arozarena, Tyler Glasnow, Austin Meadows and Joey Wendle are stars, and they're making this team a contender again. For the sake of my own rooting interest, I'd kinda hope this doesn't last the whole rest of the season, but after their early woes, I'm glad they've figured out what works.

Coming Tonight: I did not expect this team's rotation to be as good as it is right now. Here's one of their top starters.