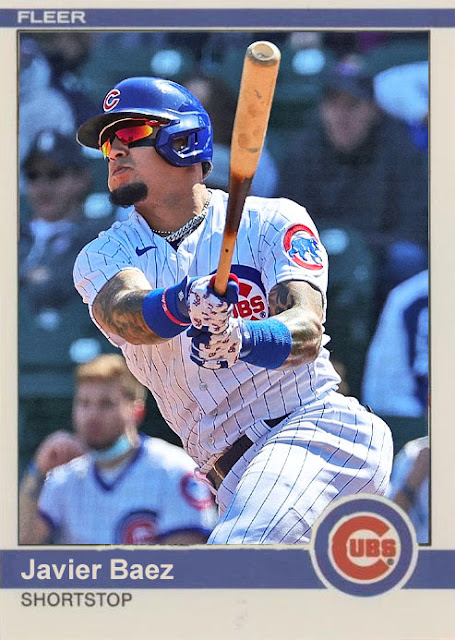 How many players in your lifetime are ever gonna ATTEMPT TO, let alone succeed at, stealing first base??

That is why Javier Baez is so great for baseball. He's one of many unavoidably fun players roaming the majors right now. I put him in a class with Ronald Acuna, Fernando Tatis and Juan Soto of just players that you have to watch whenever they're about to do something. Baez is an outlier because he came up in 2014, and it took him a few years to figure out the majors and his place in it, but once he took hold of things, around 2016 actually, he was unstoppable. Baez was inches away from an MVP in 2018, but lost to Christian Yelich. He's been one of the best players in baseball ever since, and sadly had a comparative down year in 2020, never especially acclimating to the shortened season.

Perhaps that's why it's so gratifying to see Javier Baez thriving again in what could be his final season in Chicago. Yes, the alarming part is that he is leading the league in strikeouts with 71, but he has 13 homers and 36 RBIs. These aren't the best contact numbers, but the power is especially appreciated. Like the Giants, this Cubs season is great for the preexisting core guys like Kris Bryant, Anthony Rizzo and Willson Contreras. All four are doing really well, and producing excellent stuff for the Cubs.

The Cubs have been great at subverting expectations this year. They were in last for a bit, slowly fought their way back, and have been sitting on first for a little while. They have a journeyman outfielder named Patrick Wisdom hitting like a machine in his first 8 games in Chicago, with 4 homers already. They have one of the tightest bullpens in baseball, with Ryan Tepera, Dan Winkler, Andrew Chafin, Dillon Maples and Keegan Thompson all doing phenomenal jobs behind rejuvenated ninth inning warrior Craig Kimbrel. And despite struggles from Kyle Hendricks, Jake Arrieta and Zach Davies, Adbert Alzolay has been an impressive starting option, and there's a few relief options that could start in the interim for injured pitchers.

I was not expecting to say this many good things about the Cubs this year, especially considering how many contracts are about to be up at the end of the year. Maybe they have something this year. I'd be down, of course.