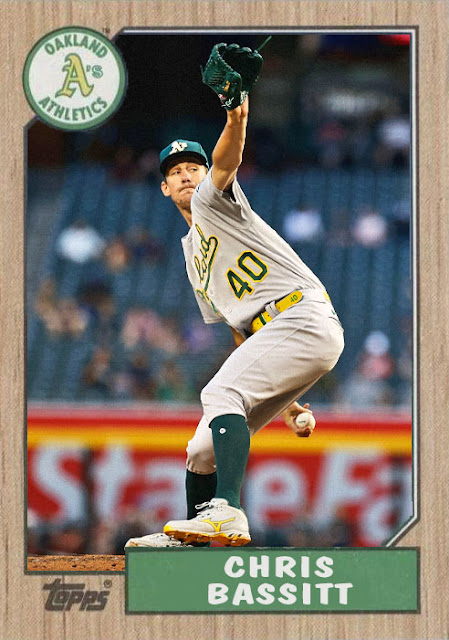 Two months of the Astros being right on their ass later, the Oakland Athletics are still in first place. I'm happy to see it, and I hope it keeps going...but there's this air of suspense around it. Like, you know the Astros could strike at any moment, and they're only 2.5 games behind them, but...the A's still have a lead. Which means, at least in the context of June...the A's might be better than the Astros. It finally happened.

The A's, like the Giants, are relying on lots of guys they've had for years who are having great seasons this year. Sean Manaea, Matt Olson, Matt Chapman, Chris Bassitt, Ramon Laureano, Mark Canha and Yusmeiro Petit are having great seasons, and are all coming together as the veteran majority of this team to lead it to the top of the AL West. We've thankfully reached the point where the A's can stop being scrappy, pull-it-together rosters and actually benefit from long-term core formations. Chapman, Olson, Canha and Laureano are the heart of the roster, and they've all showed up this season.

Even better, not only is Chris Bassitt having yet another strong season, with a 7-2 record and 92 Ks, but Sean Manaea is having his most dominant season in years, with a 2.99 ERA and a 6-2 record. Having both those aces on at the same time is doing something for this rotation, who has struggled to find a center with struggles from Jesus Luzardo and Mike Fiers in the past. It also helps that Cole Irvin and Frankie Montas are having strong seasons as well, AND rookie call-up James Kaprielian, perhaps the only piece of the Sonny Gray deal the Yankees can regret right now, has 3 wins in 6 starts and his coming into his own in Oakland. Plus, Trivino's lights-out in the 9th, Diekman and Petit still work in middle relief, Cam Bedrosian was a steal, and Tony Kemp is finally hitting for average. So a lot is going right for this team.

It's also worth noting that the A's have the longest tenured manager in the bigs, Bob Melvin, and they are open to an extension to him. That's kinda odd- thanks to Scioscia leaving, the longest-tenured managers are all in the early 2010s, and this era doesn't have a lot of Bobby Cox type 'there forever' guys left [Tony LaRussa doesn't count anymore], other than...what, Bud Black? I dunno if he'll still have a job in a month or so, but regardless. But yeah, it's good that they still have him.

The A's are in great shape, have a reliable core, and while their lead over the Astros is scarily narrow, I still have faith they can pull this one out for once. It's about time.

Coming Tomorrow- On the other side of the bay, one of the most consistent shortstops of the last 10 years hands in another gem of a season.