A Million Jays to Die 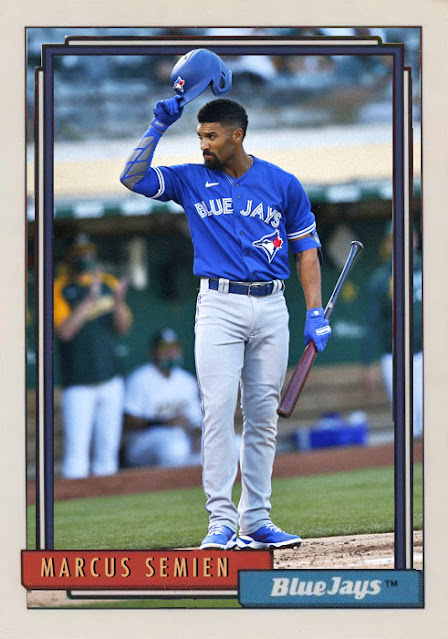 The AL East train keeps a-rolling, with the Red Sox now the sturdy frontrunner, the Rays dropping since the substance bans went up, and the Yankees struggling to gain ground. And at the back of the train, as has become usual, there are the Toronto Blue Jays.

It's definitely not for a lack of trying. Some of the best performers of the season come from Buffalo this year- Marcus Semien's having an excellent season at 2nd, with 18 homers and 42 RBIs, while Vlad Jr. continues to challenge all-comers for the MVP race. You also have your usual suspects, like Hyun-Jin Ryu and Bo Bichette, and some recent charmers like Robbie Ray and Tesocar Hernandez.

But around those big players, you begin to see the cracks. The Jays are down to their third choice at catcher, Reese McGuire, and a AAA-type for backup. George Springer just returned from the IL and still is taking his sweet time getting back to peak levels. Cavan Biggio and Lourdes Gurriel are still having disappointing years in the wake of the rest of the lineup. And the further back you go in the rotation, the more troubling performances you find, like Ross Stripling struggling, and Alek Manoah getting 5 games for plunking Maikel Franco, and Anthony Kay still not delivering upon what the Mets teased for him.

And that's really the main issue- the depth that exists in the lineup doesn't carry to the pitching. The team has gone through so many closers before getting Jordan Romano to give it a shot, and while he's been strong so far, he's primarily a middle reliever. Similarly, a lot of the bullpen pieces are made up of former starters, like Trent Thornton and Tyler Chatwood. Stripling and Kay would similarly be working out of the bullpen on a lesser team, who would also probably be keeping Reese McGuire and Riley Adams in the minors.

So many things are in the wrong place on this team that even the things that are in the right places begin to look off. Both Vladimir Guerrero Jr. and Marcus Semien are playing completely new positions this year, and while they're both working well here, it does factor right into the Blue Jays' belief that a player's abilities can be flexible. And by testing this ability, they're also exposing how it isn't always right.

One of two things are going to happen. Either the Jays will give it a rest for 2020 and maybe just get rid of a few smaller contracts, or they're gonna wait on the AL East race, go for it, and chase the Yanks and Rays away in September. But they need to decide who they want to be.

Coming Tomorrow- Maybe I'm a little bitter because his team just swept my Phillies, but he may be in the midst of his first human season.