The penultimate week, the penultimate post, the penultimate grouping, the next-to-last time you're ever gonna hear anything about my 2020 Topps Final Edition set. This was fun, but man it was a monolith, and man it was an investment to keep posting selections from it every monday and friday. Phew. But we got through it, and today's is our last full page of cards from it. Some interesting stories in this one. 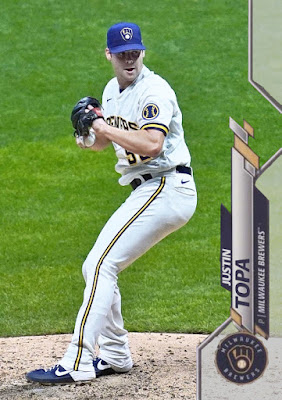 Card #316- Justin Topa, Milwaukee Brewers
Justin Topa was brought up to make up for A.) Devin Williams hitting the IL, and B.) David Phelps getting traded to Philly. The Brewers' bullpen needed to sustain its strength, and Topa was a low-key minor league threat that did the trick. In 6 appearances, Topa struck out 12 and had a 2.35 ERA, keeping middle relief a strength in Williams' absence, and throwing 2 scoreless innings of postseason ball against the eventual World Champions. Topa's been injured all season, so the Brewers have had to carry on without him [they've been doing pretty well], but he'll no doubt be an important piece once he returns. 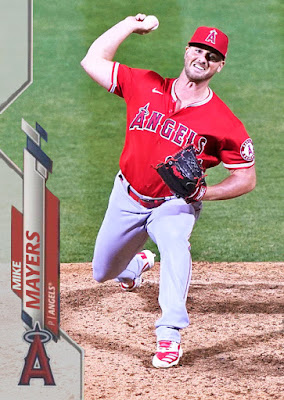 Card #317- Mike Mayers, Los Angeles Angels
After four shaky seasons with the Cardinals, reliever Mike Mayers had the best season of his career last year with the Angels. In 29 games, Mayers fanned 43, won 2 games and had a 2.10 ERA. It gave him a 1.0 WAR, his first-ever positive WAR, and a statement in his favor. Mayers has been alright so far in 2021 for the Angels, but nowhere near as dominant as last year. 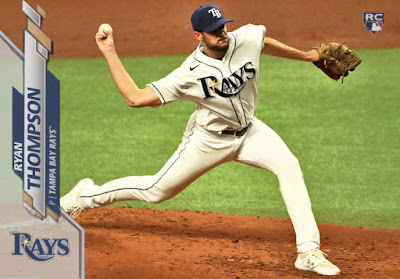 Card #318- Ryan Thompson, Tampa Bay Rays
Ryan Thompson was another one of the many homegrown pesky relief options the Rays employed on their way to a World Series appearance. Thompson had a 4.44 ERA in 25 games during the 2020 regular season, his rookie season, and had a 1.93 ERA in 9 postseason appearances, with 10 Ks, and only 2 runs coming at the expense of the Yankees offense. 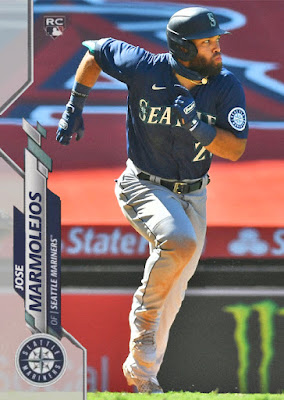 Card #319- Jose Marmolejos, Seattle Mariners
Jose Marmolejos was one of two rookies who made the Opening Day lineup for the Mariners, the other being gold-glover Evan White. Marmolejos was similarly vacant at the plate as well, hitting .206 with 18 RBIs in 35 games. After 31 similar games this season, Marmolejos was sent back down to Tacoma, where he actually seems to be hitting for average. 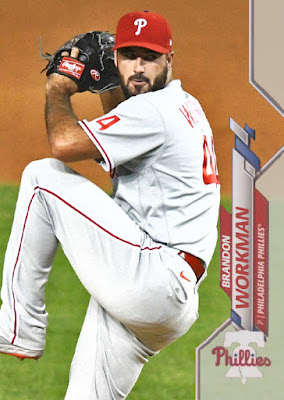 Card #320- Brandon Workman, Philadelphia Phillies
I've talked about this story before, but Brandon Workman was netted by the Phillies in a trade that sent him and Heath Hembree to Philly and Nick Pivetta to Boston. Pivetta's been stellar since the trade, and Hembree and Workman suffered in the bottomless pit of the Phillies bullpen. Workman had a 6.92 ERA in 14 games with the Phils, blowing 3 of his 8 save opportunities. He seems to be doing a bit better since being returned to the Sox, but...not a great move for Klentak, which explains why he's out. 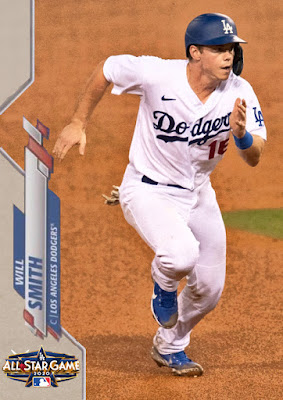 Card #321- Will Smith ASG, Los Angeles Dodgers
The last of the 2020 ASG cards in this set, Will Smith would have snatched the starting NL All Star catching gig out of the hands of J.T. Realmuto. It would have been a deserving choice though- Smith hit .289 last year with 25 RBIs, and gave the Dodgers backstop security during their Championship season. He's similarly doing well this year as well, proof that LA may have netted themselves a winner. 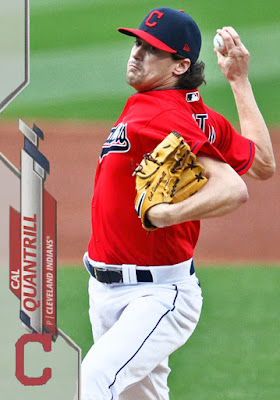 Card #322- Cal Quantrill, Cleveland Indians
Cal Quantrill had run out of uses in San Diego, and the son of a former Toronto reliever was promptly shipped to Cleveland for Mike Clevinger. The Indians similarly had barely any use for the decent-starting-but-better-relieving Quantrill, and used him out of the pen in 8 games. He did well for the Tribe though, with a 1.84 ERA and 13 Ks, and has been much better in a dual role this year, shifted into a starting position due to the injury issue. 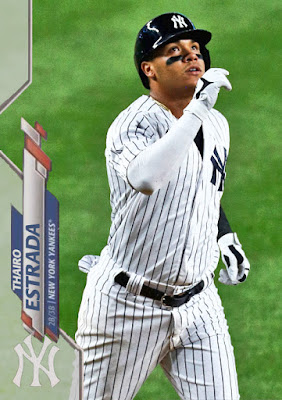 Card #323- Thairo Estrada, New York Yankees
The last position player [I.E. non-pitcher] in this set, Estrada was one of the main bench pieces for the Yankees last year. After a decent call-up in 2019, Estrada struggled in a similar role last year, only hitting .167 in 26 games, with 3 RBIs. He was purchased by the Giants before the 2021 season, and hasn't seen much major league playing time, unlike one of his fellow 2020 Yankee benchmates. 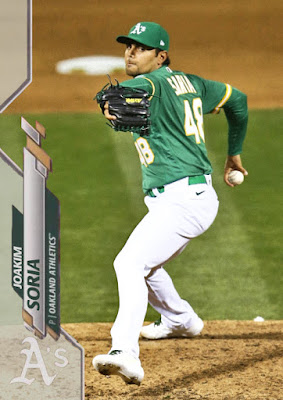 Card #324- Joakim Soria, Oakland Athletics
Joakim Soria has been a dangerous relief option since I started collecting, and it's a joy to still see him hopping teams and putting in the work. Last year he was in Oakland, and continued his recent dominance, with a 2.82 ERA and 4 Ks in 22 games, though he did give up a few postseason runs. Given Soria's comeback in the last few years, it's kind of puzzling as to why Soria wouldn't get a card in flagship or Update, but that's what I'm here for. Hopefully they give him one from the D-Backs this year.
Monday will be the final post from this set, and the final six cards of it. I've saved one or two whoppers for the end.
Posted by Jordan at 7:50 PM