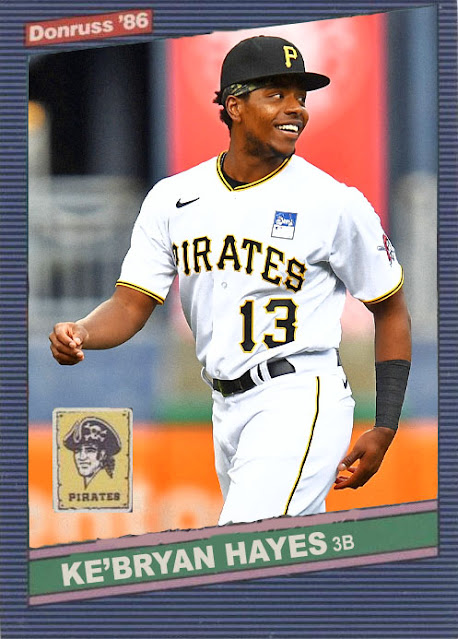 In 2009, the Pittsburgh Pirates are in the midst of one hell of a drought. They hadn't even finished a season over .500 since 1992, also admittedly the last time they were in the playoffs, they'd been in 5th or last every year since 2004, they hadn't had a player with a WAR over 6 since 2000 [Brian Giles], and they were getting restless.

2009 was also the year they brought up a piece that would turn the team around entirely, named Andrew McCutchen. Thanks to the Bucs building the team around Cutch, they'd be a contender in the mid-2010s, and have their renaissance...before, you know...falling into the hole that we reach them at now.

So, could Ke'Bryan Hayes be the Cutch of the new era? Well...things are slightly different now than they were in 2009. While this is a last place team, this is a last place team that has some substantial pieces, like Adam Frazier, Bryan Reynolds, Richard Rodriguez and Jacob Stallings, who have enough appeal outside of Pittsburgh. Granted, a few of these pieces may be traded this July, but there is still a foundation in play. It's not like 2009, where Cutch was pretty much alone in bringing the team to the next generation.

Also, Ke'Bryan Hayes is a very different player. He is similarly contact-friendly, but primarily he's known for his power, and has 14 RBIs in 23 games. Cutch was a bit more of a contact guy than Hayes, even if Hayes is still starting out. But Hayes does have that young sort of pop about him at 24, and has jumped to the top of the WAR leaderboard despite missing a month or so due to injury. He's already an integral part of the Pirates, and is already forming the ideas of the next generation of Bucs teams.

A few interesting things about this team- there's a very minimal bench. Only a backup catcher, two backup infielders, and a backup outfielder. That's it. Everyone else was released or demoted. And considering that Todd Frazier, Dustin Fowler, Ildemaro Vargas, Troy Stokes, Anthony Alford, Wilmer Difo and Baez-fooled Will Craig have all been released or traded by this team, the Pirates definitely know what they want.

And yet they just demoted Max Kranick right as he pitches 5 perfect innings for them in his MLB debut. I understand that they're trying to keep a 6-man rotation going without taking up space, but Chase De Jong has yet to really impress in his 5 starts, and Wil Crowe has a lopsided W/L ratio. The answer seems clear, and Kranick seems ready, but they want to explore all their options. Why hear out the struggling guys, though? This is a last place team, and they didn't do that for the lineup. Why indulge? And why indulge Gregory Polanco, who's still barely hitting .200?

There are still a lot of problems that even Ke'Bryan Hayes can't fix. But damn if there aren't a lot of plus sides to this Pirates team. I dunno how many of them will still be here in a month, but it's worth noting.

Coming Tonight: Some Rangers dude who hits a lot of home runs.