51 Cards Left in This Set! We've hit the last month of this project, and we've got only a few more posts to go til we're through with it. Yet despite all the progress we've made and the cards we've shelled out, there's still some very big guns left in this post, a few of which really, REALLY should have gotten Topps cards in 2020. 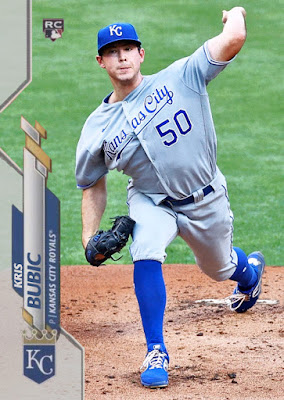 After Brady Singer became a smashing success out of camp with the Royals, the team looked to another minor league arm that was ready to call up, that being Kris Bubic, the fresh-faced hurler who started 10 games for KC last year. While not quite as showy as Singer, Bubic was steady enough in his 2020 tenure, with a 4.32 ERA and 49 Ks. Bubic has been used more as a replacement starter in 2021, but his numbers have been more impressive. 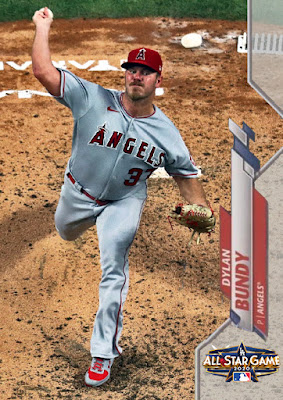 Card #281- Dylan Bundy ASG, Los Angeles Angels
2020 was an incredible year for former Orioles homegrown hurler Dylan Bundy, and if the 2020 season hadn't been preempted as it has, he would have earned an All Star Game nomination, and would have probably stood by for an inning for the AL. Bundy's high-strikeout work was sensational in his first season in Anaheim, making his 2021 crash down to earth all the more heartbreaking. 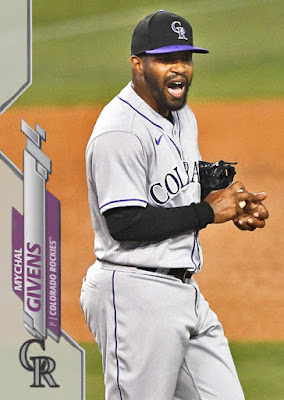 Card #282- Mychal Givens, Colorado Rockies
After Richard Bleier was dealt to Miami, Mychal Givens was one of the last few veteran relief assets the Baltimore Orioles had left in 2020. That being said, him and Miguel Castro being dealt at the deadline shouldn't have been much of a shocker. Givens was traded to the Rockies to abet their potential postseason push, and he struggled in 10 games with a 6.75 ERA. Thankfully, Givens's numbers have improved to their normal rates in a full year with the Rox. 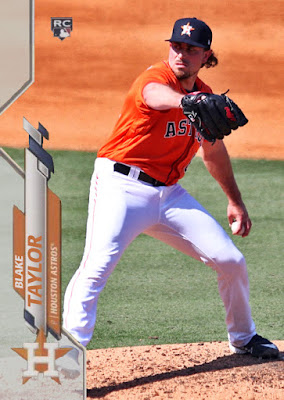 Card #283- Blake Taylor, Houston Astros
Blake Taylor was the Astros' return in the Jake Marisnick trade, after already being traded to New York in exchange for Ike Davis 5 years earlier. The Astros had some pen space for Taylor in 2020, and he became one of the more crucial rookie relief options last year. In 22 games, Taylor hit a 2.18 ERA with 17 Ks, and had a 1.59 postseason ERA with 8 appearances over 2 series for the Astros. Taylor's sophomore season for the Stros has been slightly disappointing thus far, though. 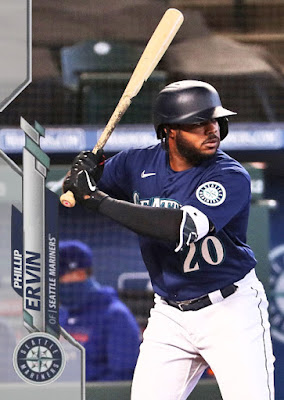 Card #284- Phillip Ervin, Seattle Mariners,
In an outfield that was running out of room, Phillip Ervin became the odd person out in Cincinnati very quickly, and was dealt to Seattle right around the time of the Brian Goodwin trade [which got the Reds nowhere]. His numbers improved slightly for the Ms, with 4 RBIs in 18 games, though his playing time was minimal due to the burgeoning youth movement there. Ervin is currently in the Braves' minor league system, waiting for another opportunity. 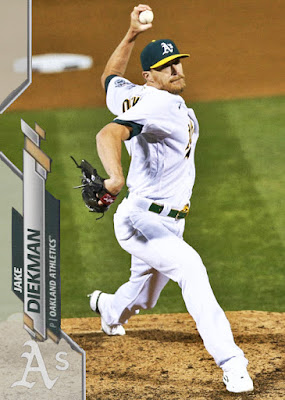 Card #285- Jake Diekman, Oakland Athletics
This, along with Jeffress, may have been one of the most sinful omissions by Topps during their 2020 flagship run. Jake Diekman finished the 2019 season with the Oakland Athletics, a uniform change that was not depicted in 2019 Update because they weren't doing deadline deals. So you'd figure, okay, they do a Diekman A's card in 2020 Topps. They did not, because they don't think relievers exist past the ones who are relevant. Their loss. Diekman had an INSANELY strong 2020 season, only allowing 1 earned run in 21 innings, with 31 Ks. He'd also strike out 5 more in the postseason, despite giving up some runs to Houston. Diekman was one of the best relievers in baseball during the 2020 season, and is off to a nice start in 2021. Hopefully Topps gets the memo this time. 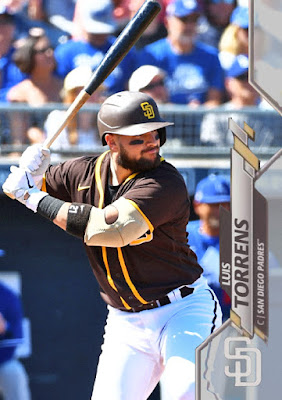 Card #286- Luis Torrens, San Diego Padres
Years after floating around the Yankees and Padres farm systems and...inspiring a blog or two, Luis Torrens FINALLY got some reps at catcher on a consistent basis in 2020. As Austin Hedges pulled his usual 'refusing to hit' schtick, Torrens was a useful backup option for the Padres, hitting .273 in 7 games before getting injured. Unfortunately, Torrens' time in San Diego would come to a close once he'd get traded to Seattle for Austin Nola. The Mariners' end of his season will be discussed fairly soon. 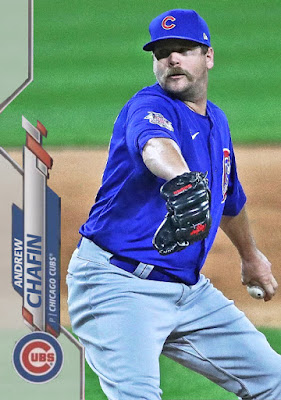 Card #287- Andrew Chafin, Chicago Cubs
Andrew Chafin, longtime relief weapon for the Diamondbacks, was off to a terrible start in 2020, with an 8 ERA in 11 games. So buyers wondered if it was the environment rather than the pitcher that was causing this, and asked for Chafin's availability. The Cubs traded for him, and got 4 relief appearances out of him last year, improving over his D-Backs numbers and leading to a very small postseason appearance. Thankfully, Chafin has been outstanding so far for the Cubs in 2021, and is one of the top relievers in a very strong bullpen. 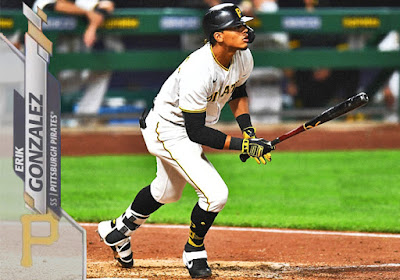 Card #288- Erik Gonzalez, Pittsburgh Pirates
Erik Gonzalez was a backup infielder from Cleveland that was traded for Jordan Luplow. That deal has worked for both parties- Luplow has been an intriguing bench piece for the Tribe, while Gonzalez has been a high-quality backup infielder for the Bucs. Last year, for a small period of time, Gonzalez was the highest-ranking player on the Pirates. August was Gonzalez' biggest month at the plate, with a .282 average and 15 RBIs, but everything around that month dragged him back down. He's been decent enough so far in 2021.

Monday, we get 9 more cards from this set. Two very big stars and some big rookies are in here.