As we approach the final hero number card, which we will hit on Friday, we continue our rectification of the 2020 Topps sets, including uniforms and players that should have been there, and depicting an All Star Game that should have happened.

Onto the next 9 cards: 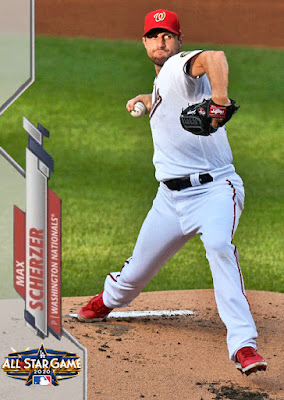 The only thing standing between Max Scherzer and his eighth consecutive All Star nomination was a global pandemic. Thankfully, if the 2020 ASG had been played as normal, Max Scherzer definitely would have been given an invite for the NL squad. Now 36, Scherzer is still undeniably one of the best pitchers in baseball, still can pile up strikeouts like nobody else, and providing a low ERA, even though his 2020 numbers were a bit elevated comparative to previous years. The good news is that Scherzer's currently leading the NL in Ks, and is on pace for another career year, and that 8th ASG nod. 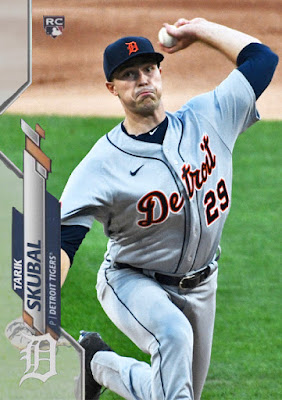 Card #290- Tarik Skubal, Detroit Tigers
One of two major pitching rookies called up in July of 2020, Tarik Skubal did his best when faced with some of the best lineups in the central divisions, but struggled. In 8 games, he posted a 5.63 ERA, a 1-4 record and 37 Ks. His 2021 numbers are slightly better, and he's beginning to get the hang of MLB hitters, but being on the Tigers certainly does not help. 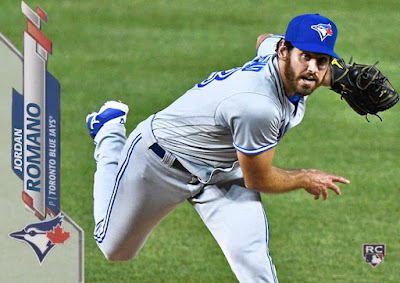 Card #291- Jordan Romano, Toronto Blue Jays
Jordan Romano is a rarity these days, a rare native son of Canada who actually gets drafted by, and debuts with, the Toronto Blue Jays. Although Romano was a multiple-time Rule 5 draft pick, and bopped around from Chicago to Arlington and back to Toronto during the 2019 offseason, he finally made a name for himself as a Blue Jay last year, spinning 15 innings of solid relief work over as many games. Romano finished the season with a 1.23 ERA and 21 Ks. Romano has been similarly dominant during the 2021 season as well. 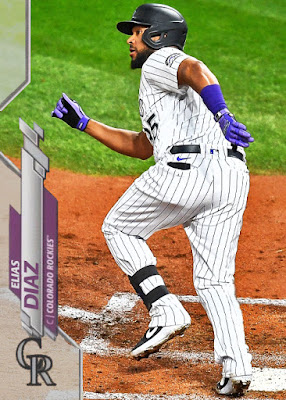 Card #292- Elias Diaz, Colorado Rockies
By 2019, with Francisco Cervelli missing time due to concussions, the starting catching job in Pittsburgh was between Elias Diaz, longtime backup, and Jacob Stallings, fellow longtime backup. Somewhere in late 2019, Stallings won the job, and Diaz was cut, and signed with the Rockies to back up Tony Wolters. In 2020, Diaz had 26 games to prove himself, and hit .235 with 9 RBIs and 2 homers. Not much, but on par with what Wolters was doing. Now Diaz is backing up Dom Nunez, and hitting significantly worse. 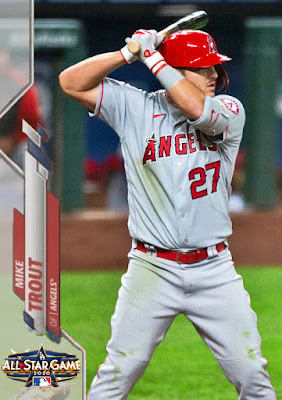 Card #294- Mike Trout ASG, Los Angeles Angels
What do I even need to say about this one? Of course Mike Trout starts the 2020 ASG in the outfield. Of course people vote for him, of course he plays, of course he had another phenomenal season last year. It's kind of a foregone conclusion at this point. Even with an injury this season, Trout is still seen as the best in the game, and will likely come back and get right back to where he was. 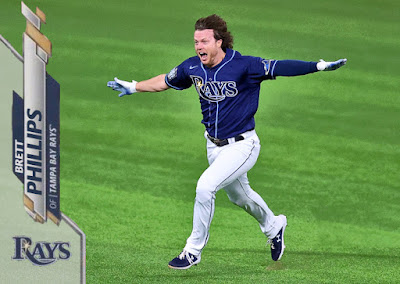 Card #295- Brett Phillips, Tampa Bay Rays
Yeah, in the scope of the 2020 season, this is a very important one. Brett Phillips, the man who went to Milwaukee with Adrian Houser and Josh Hader in exchange for Mike Fiers and Carlos Gomez, then went to Kansas City in exchange for Jorge Lopez, was dealt again, to Tampa from Kansas City, in the last throes of the season. It was a very low-key deadline deal, one that didn't mean much at the time. Heck, it didn't mean much for the regular season either, as Phillips hit .150 with 3 hits and 3 RBIs in his 17 regular season games. But all it took was one plate appearance in the postseason to turn things around, driving in the game-winning RBI during a very long World Series game against the Dodgers, and keeping the Rays alive a little longer. Phillips is having a much better 2021, though his inability to hit for average persists. 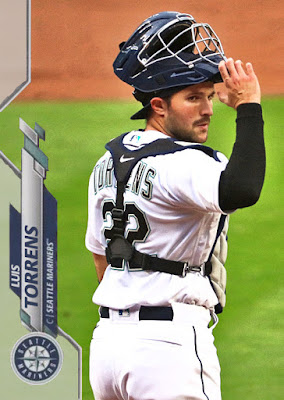 Card #296- Luis Torrens, Seattle Mariners
Last post we talked about Luis Torrens, former Yankee prospect who was catching games in San Diego in August 2020 before being traded for Austin Nola. Torrens walked right into the starting catching spot for the Mariners, and did a decent job at the plate, hitting .254 with 6 RBIs in 18 games. His defensive abilities were a concern, and given another starting role in 2021, Torrens would disappoint, with a .178 average in 25 games. Torrens is currently back in the minors, waiting for his next chance. 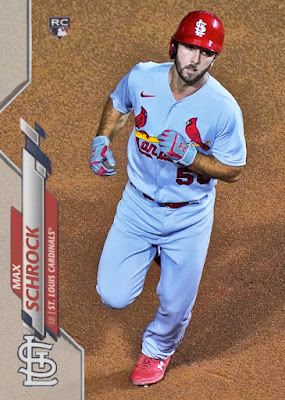 Card #297- Max Schrock, St. Louis Cardinals
Once the Cardinals returned from their long COVID shutdown last year, there were several holes in the roster that needed to be filled. One of the was filled by utility infielder Max Schrock, who'd come to the team in the Stephen Piscotty deal. Schrock was a decent defensive piece that struggled at the plate in 11 games, with a .176 average despite 1 home run. Schrock was demoted thereafter, waived by Chicago and then Cincinnati, and is now a decent bench bat, albeit an injured one, for the Reds.

On Friday, we get to card #300, and some other cards as well. Lots of ASG cards coming up in this one.