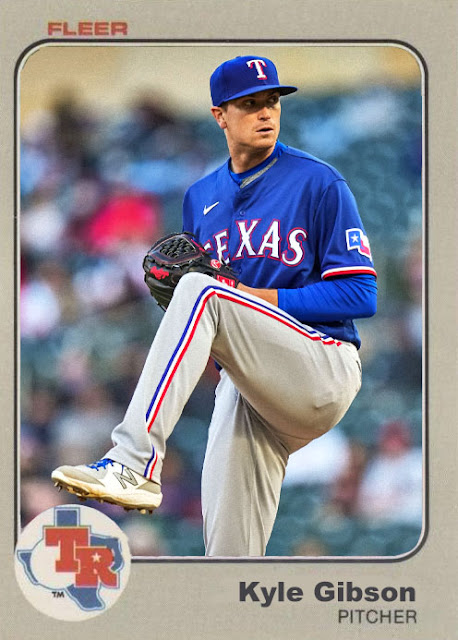 Kluber. Minor. Lynn. Gibson. Lyles. Maybe Kolby Allard or Brock Burke. This was the rotation we were excited about going into the 2020 season, as the Rangers built up their rotation like never before, all while...trading Delino Deshields and Nomar Mazara, diluting their lineup, and still banking on the rotation to guide them through.

Well. We're a year removed from this experiment. So let's catch up to this rotation in Arlington. Only two of these pieces are left in the rotation, Kyle Gibson and Jordan Lyles. Allard's not starting, Burke's not in the majors. Minor, Lynn and Kluber are all elsewhere. So we're really down to the two guys who were added to the rotation as supplementary starters, and now they're relied upon big time. Lyles has a 5 ERA again, and has struggled for the second consecutive year.

Gibson on the other hand? Yeah, he's doing alright.

Kyle Gibson, whose one flaw in his Minnesota tenure was never being excellent in consecutive seasons, is finally good again, of course coming a season after a down year in Arlington. So far, Gibson has a 2.13 ERA and 4 wins, he leads the team in WAR with 3.3, and is far and away the best pitcher on the Rangers. He's also pretty much guaranteed to stick around for at least another season, as he's locked up until 2022, and his contract isn't one the Rangers plan on dumping immediately.

Still, the fact that of the five-man team that was expected by many sportswriters to define the Rangers last time, only one is proving his worth for the Rangers one year later...that's not great. Even worse, the three that left are all doing pretty well for their new teams, one of them even pitching a no-no against the Rangers last month.

I will say that the other rotation pieces behind Gibson, like Dane Dunning and Mike Foltynewicz, haven't been too bad. They've both been flawed in places, but they could be doing a lot worse, especially Folty, who's found his control for the first time since 2018.

But...for what this team was supposed to be, this Rangers team feels like a pretty big failure, even with nice performers like Isiah Kiner-Falefa and Adolis Garcia. They may not have fallen as fall as the Angels, but they've failed their fans yet again.

Coming Tomorrow- The worst team in the league. And their second year first baseman.