A Return to the Online Dime Box 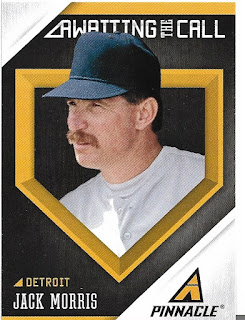 It was bound to happen eventually.

The lack of retail wax showing up, the continued slow card season, the general murkiness of it all. Eventually it was all going to lead me back to baseballcardstore.ca.

This time, I truly scoured its baseball card catalog and grabbed corners that hadn't really been  covered in my  collection, just as a way of upping the ante both for the site and for me. I finished with an expansive, and inexpensive, haul of several cool cards over several card eras. 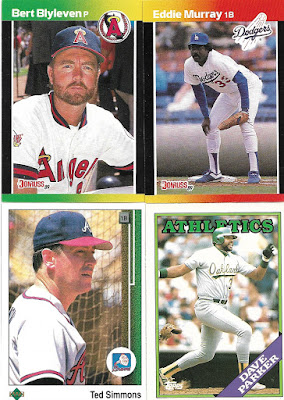 If I wanted to, I could have scoured entire sets that were being uploaded for numerous cards that I needed from each. I really  didn't feel like doing  that. Other than, like, Update sets that were added, I'd normally just search player specific stuff. Still, it got some nice picks from 1989 Donruss Update, 88 Topps Update, and a late-career Ted Simmons from 89UD. 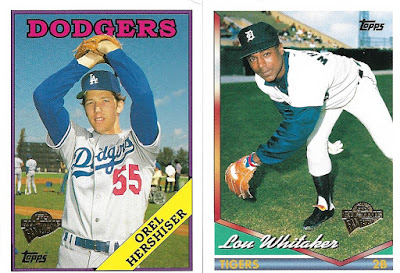 There was a small amount from 2004 All Time Fan Favorites [proof  that even  in 2004 they couldn't recreate the 88 Topps font], of guys I collect.

They also had some selects from 2000s-era retired sets, like this Fleer trifecta of legends you don't see very often anymore. 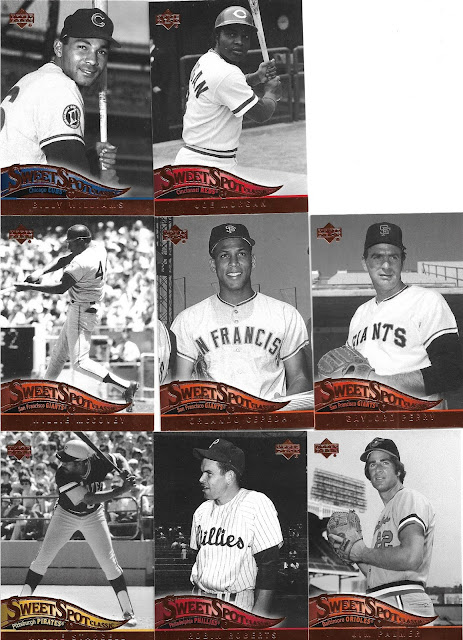 The  big winner, though, was 2005 Sweet Spot Classic, who made up for its black-and-white photos with some rare, not-seen-often photography for the legends. 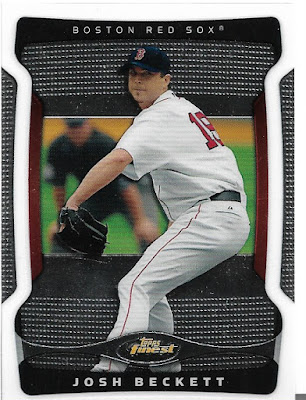 Because I got into the hobby in 07, and got my packs mostly from retail suppliers, I didn't get a lot of Finest, SP Authentic, Sweet Spot sort of sets when they were around. This site had a BUNCH. Like...this might  be the biggest part of the post. This 2008 Finest Josh Beckett [forgot how much I liked this design] is the tip.

Granted, most of these would be earlier, Upper Deck products, so let's run through 'em: 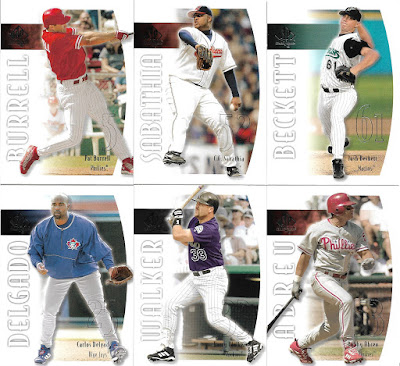 2002 SP Authentic, a set I barely have anything of. I love the vested Marlins uniform on  Beckett's, and Delgado's very 2002 UD-esque jacket shot. 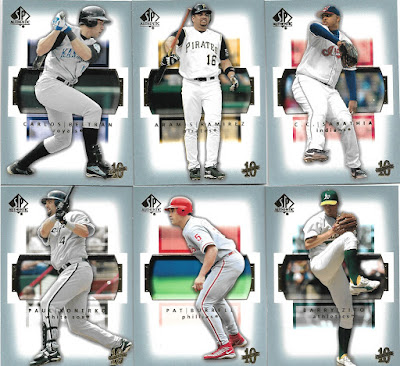 2003 SP Authentic, another one I have barely anything from. 2003-era Aramis Ramirez looks off in a Bucs jersey. This is like, immediately pre-trade, too.

2004 SP Authentic. This one I have a good bit of, which is funny cause it's one of my least favorites design-wise. 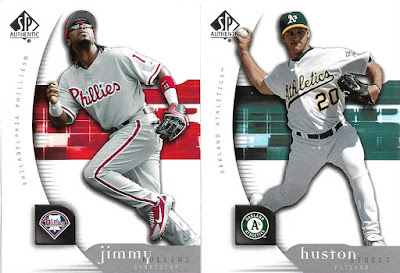 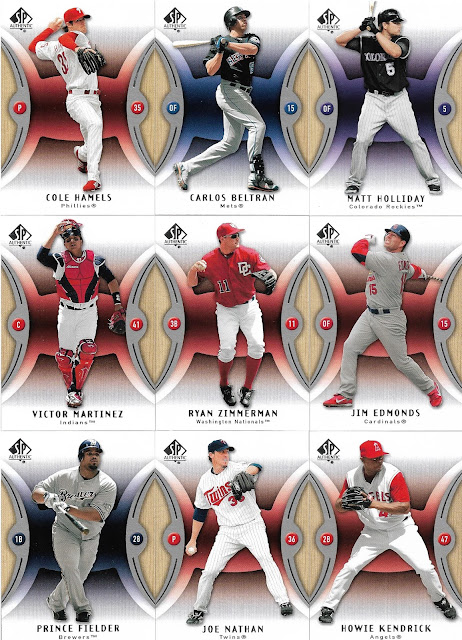 2007 SP Authentic: This one I actually have a ton of, and  yet I was missing all of these. The Beltran and Hamels feel shameful. 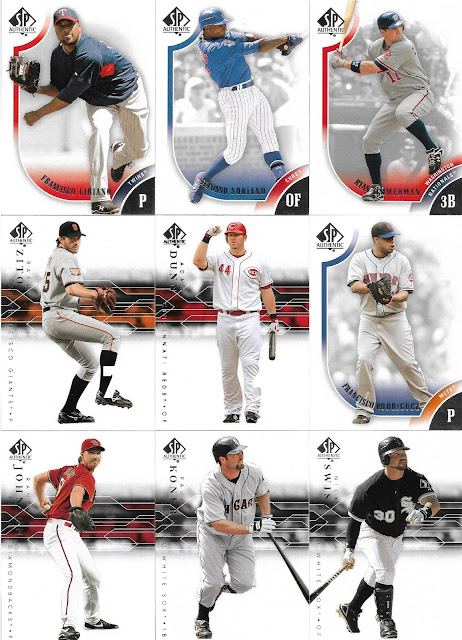 2008 and 2009 SP Authentic: These I collected some of from retail, and was still missing the Konerko throwback and fleeting instance of Nick Swisher in Chicago. 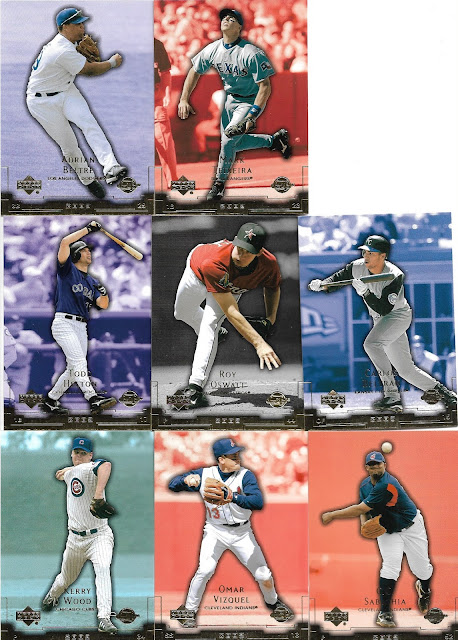 2003 Sweet Spot- yeah, this one surprised me, and this is a cool base set. Lots of the same commons-type subjects, but a rookie-era Teixeira is nice. 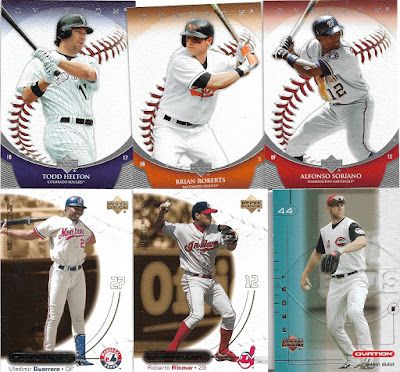 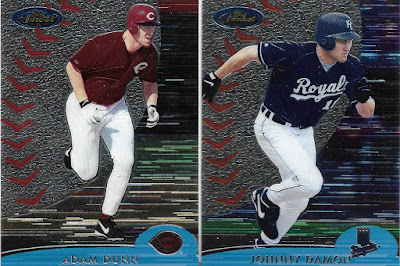 2000 Topps Finest! Yeah, I wasn't expecting this one either. Dunn's is near a rookie. 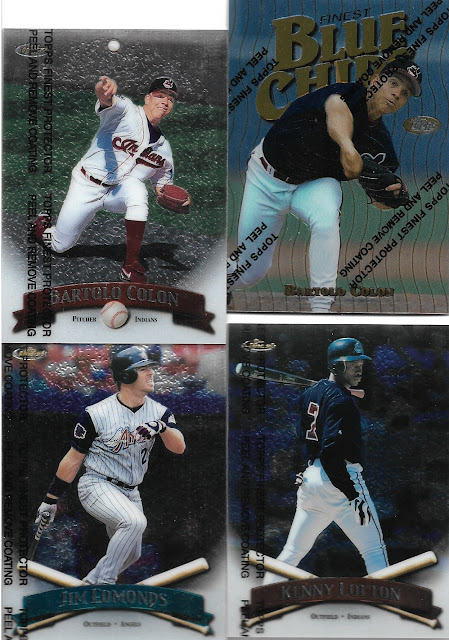 They also had some assorted 90s Topps Finest. Most were from 1998, but  the Blue Chip Colon was from 1997. Lofton looks awesome there.

And some odds and ends from that, including a 2007 Co-Signers Liriano, a 2005 Sweet Spot Oliver Perez, and 2005 UD Reflections' depiction of Carlos Delgado's year in Miami.

This bit is brief, but I went for some glimpses of players in  odd uniforms. Wagner and K-Rod in  Queens work for this.

I figured I needed more from Robin Ventura's NY era, and all 3 of these more unusual released complied. 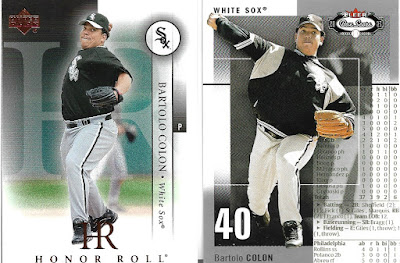 And...of course...more Bartolo Colon. Y'all shouldn't be surprised at this point. 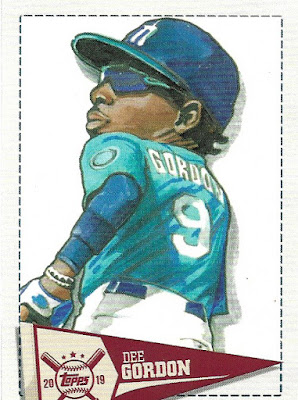 Because of course there were some. I find I'm still getting Big League Caricatures that are  new to me, even after I kept pulling dupe inserts. 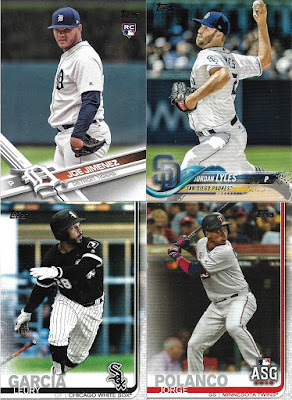 I actually needed a lot from  the Update sets of recent history, but these four are the only ones I'll show. 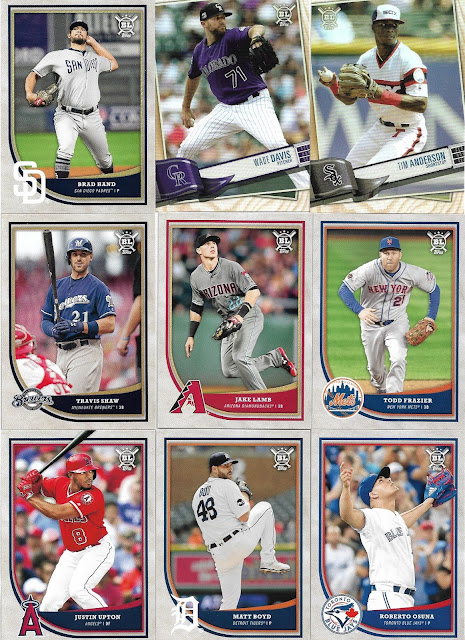 Somehow I still needed these Big League base cards. The Anderson and Osuna are the best photos, and I love pulling Todd Frazier cards. 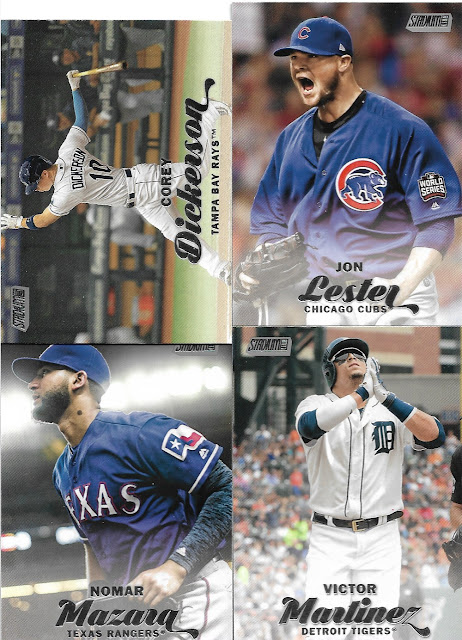 Heck, somehow these Stadium Club ones passed me by. Could have sworn I had that V-Mart 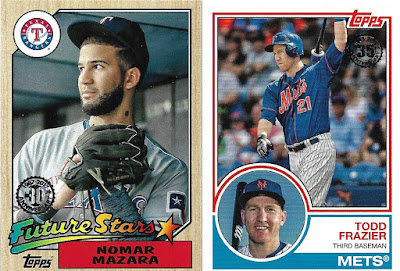 Some recent reprint inserts. I actually  do like these a lot, especially 2017T's 87 ones. That Mazara just works. 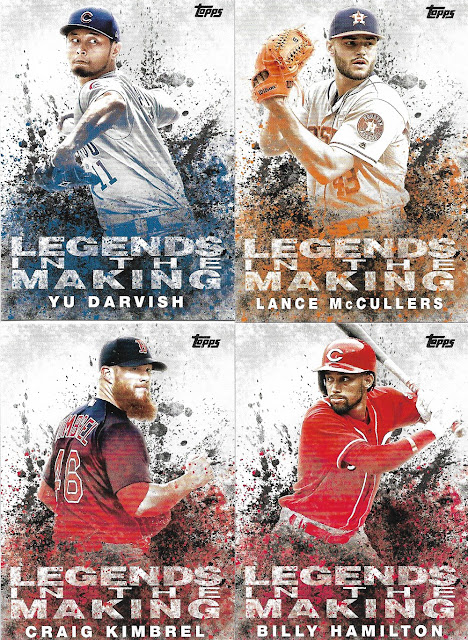 I have a soft spot for these Legends in the Making inserts from 2018. They're not much, but  they're cool.

Assorted cool inserts from the early 2010s. I don't see why Tex had to be in  a Rangers uniform for his LoMo comparison. 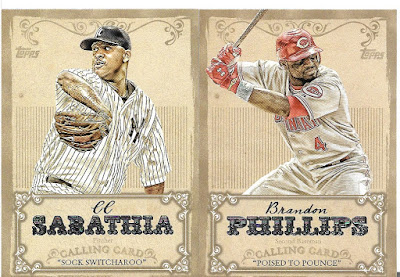 I never pulled enough of these 2013 Calling Card inserts. They're cool. 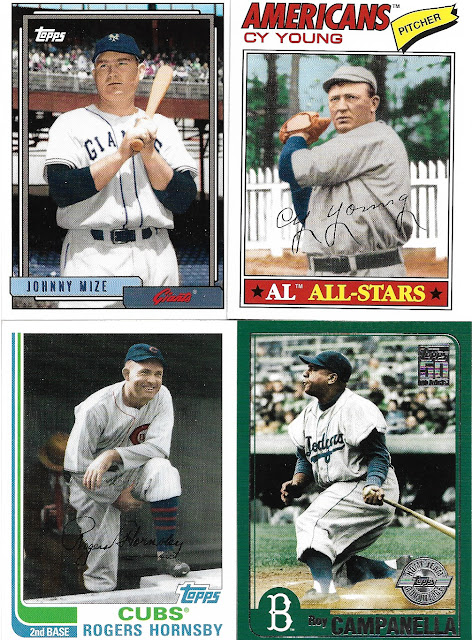 They even had some of these...very odd 2010 Vintage Legends inserts. Campy on 2001 Topps works the best. 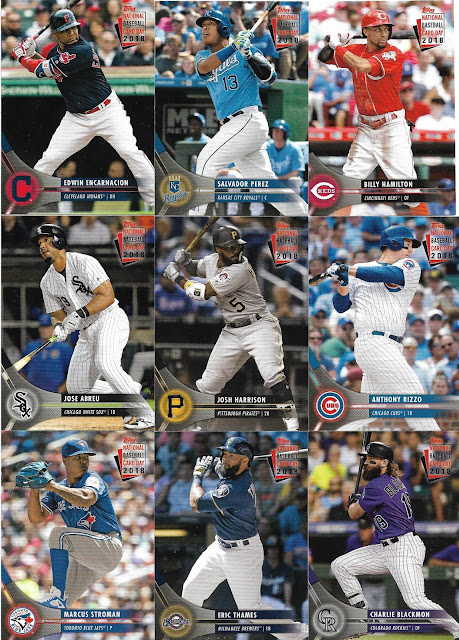 To my  delight, this site had a TON of 2018 National Baseball Card Day singles. CardBarrel has last year's for like a buck each, this site had 'em for 10 cents. And like...so many of them. All of these look great, and it's great to finally have some in my collection. 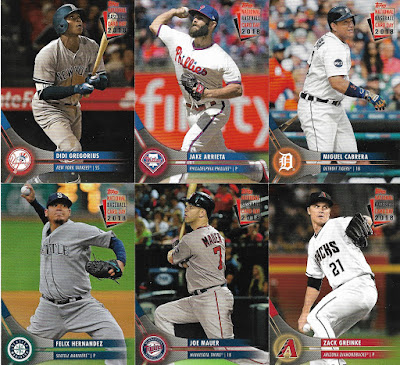 The star cards, at least  for me. How crazy is it that  only Arrieta  and Cabrera are still in their depicted uniforms only 2 years later? 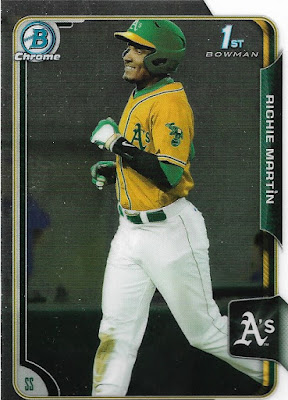 Like normal card shows, I try to find early, rookie-ish cards of people doing  well right now, and this site had a bunch. Richie Martin hasn't done much this  season, but he's still a young O's star, and this card is a zero-year of him in Oakland, which is cool. 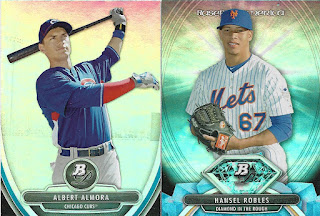 These 2 were from 2013 Bowman Platinum. Nice to see young Almora, and pre-career Hansel Robles as a Met.

2014 was the big year for these, though. They had 2014 Bowman Trevor Williams and Andrew Knapp XRCs, and a 2014 Pro Debut Zach Eflin XRCs. Two unsung Phils rookies. 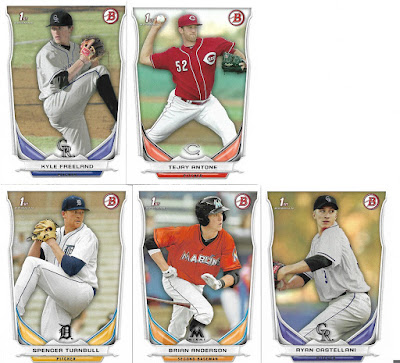 2014 Draft I got a TON  of XRCs from. It ranged from guys  coming up now in these uniforms, like recent rookies Tejay Antone and Ryan Castellani, and surefire heroes like Brian Anderson, Spencer Turnbull and Kyle Freeland... 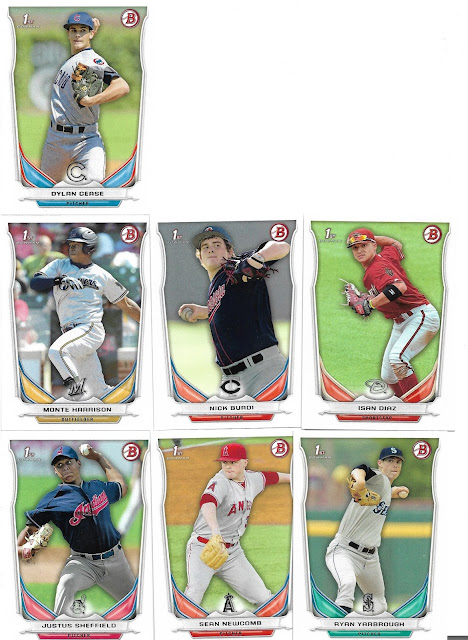 Even cooler...all seven of these are zero-year XRCs. None of these guys  played for these teams. A lot of these are genuinely odd sites- Dylan Cease as a Cub? Monte Harrison as a Brewer? Pirates reliever Nick Burdi on the Twins? It also just gives context for well-traveled guys like Isan Diaz, Justus Sheffield and Ryan Yarbrough.

Overall, this was a very eclectic and interesting haul, and a lot of these fit into cool places in my  collection. I'll keep an eye out to see what else they're adding  these days.
Posted by Jordan at 2:58 PM