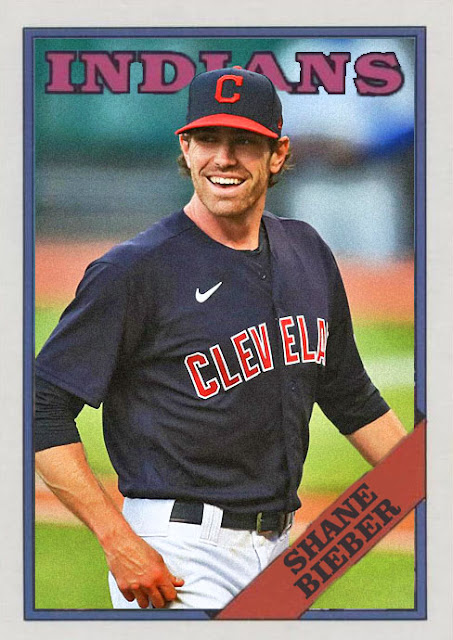 Yeah, I'm still not above the obvious joke

Anyway, Shane Bieber's the best pitcher in baseball right now and it's not even close.

Like...we don't really need to do the rest of the season, Bieber has the Cy  Young in the  bag. He has 43 strikeouts in 4 starts, 3 wins and a 1.63 ERA. Tomorrow night his opponent is Ivan Nova and the Tigers. Conceptually, this is a win.

...except things haven't been too peachy for the Indians lately. First of all, Zach Plesac and Mike Clevinger aren't traveling with the team due to violating COVID rules. So they're down two sharp starters. Good news is, with the rotation being Bieber-Carrasco-Civale-Plutko, it could be a lot worse. And besides, considering  his recent callup, one would guess  Logan Allen has  the fifth starting position, which is  also a good thing.

But even if this rotation continues to surge, which  it probably will, the Indians, who were once in control of the AL Central, have now plummeted to fourth place. In recent weeks, the Tigers, in missing a series, have stayed at 9-7, and the White Sox, despite troubles, tie Cleveland with 10-9. It's not bad, and it's still a .500+ record with enough time to catch up, so it's not...impossible to come back.

The lineup, though, could be in better shape. Oscar Mercado, Jordan Luplow, Domingo Santana, Sandy Leon  and even Carlos Santana aren't hitting as well as they should be. Leon is covering  for an injured Roberto Perez. The Ramirez-Lindor-Hernandez-Reyes core is fine, but not at peak levels yet. This is a fine lineup, but it's not where the rotation is, and games are being dropped due to that.

I hope for some level of improvement, as this is a fine  team that would be  nice in the playoffs. But it's gonna take a lot of people exceeding .200 real quick.

Coming  Tonight: It's been a weird year for the Moran brothers. Bryan was shelved in Toronto only to find a job opportunity in Miami due to a lot of openings, and his younger brother found  himself as one of the main hitters of, yes, the worst team in  baseball.
Posted by Jordan at 11:16 AM
Labels: Custom Cards, Indians, Shane Bieber