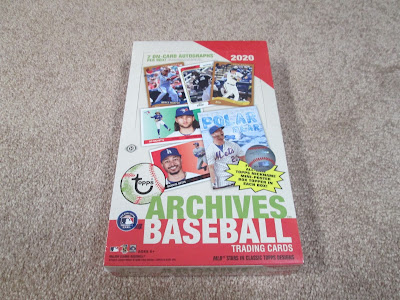 2020 is going to go down as the single most depressing card-collecting year in recent memory.

Just going to Target to check for cards depresses me. There's nothing there, everything having been picked clean by supercollectors with mojo tendencies, leaving nothing for collectors who only get to big box stores every so often. Essentially, collecting from Target and Wal-Mart has been made tougher than it needs to be, especially when new products are released.

Which is to say...I just ordered a box of Archives from Dave and Adam's cause I didn't want to haggle for products that I'm not certain will be on  shelves.

Like every other year, I'll be collecting the  base set this year, and my wants for this product are already on the sidebar, in my wantlists. Again, I need to get better at trading, and disciplining myself towards that kind of stuff past the fear of people not liking what I send. But that's a subject for another post. 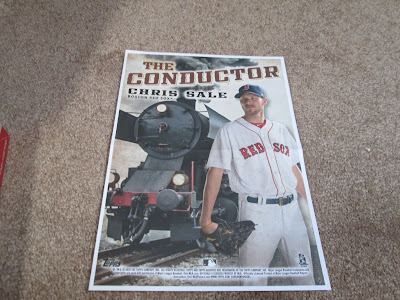 Yeah, the Red Sox one. Of course.

This is still pretty cool though, and if I were a Sox fan I'd probably hang this on my wall. 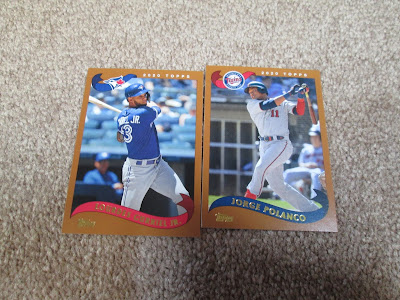 Pack 1-
These are the 2002 Topps ones. Likeness isn't bad, especially foil usage. Cardstock is uniform throughout, I think, as these have rougher backs than 2002T had.
Common base choices. 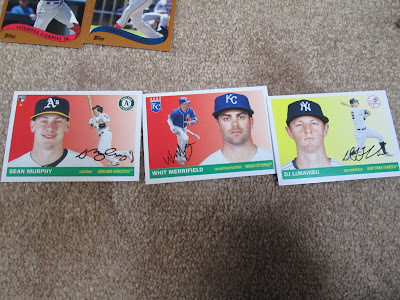 55s look good. Not a 50s cards guy, so they could have screwed it up and I wouldn't have noticed. These look cool though. LeMahieu is a nice early inclusion. 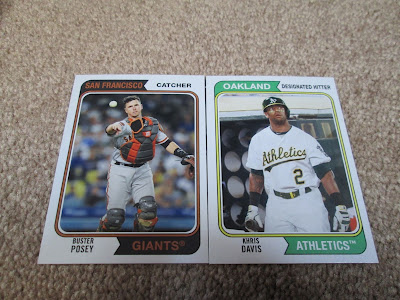 74s is where I have the most design critiques, including fonts and colors on specific ones throughout this. These ones are mostly fine, but that name font just doesn't look right to me. 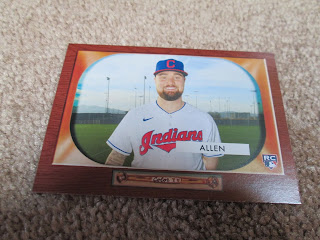 And my insert was a 1955 Bowman Archives insert of Indians rookie Logan Allen, Cena-approved. These are 1:8, so three-per-box. 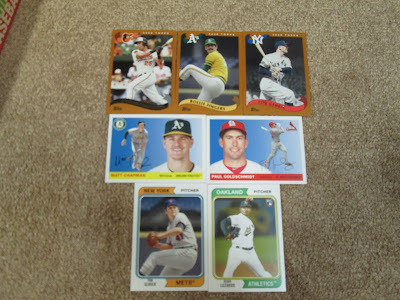 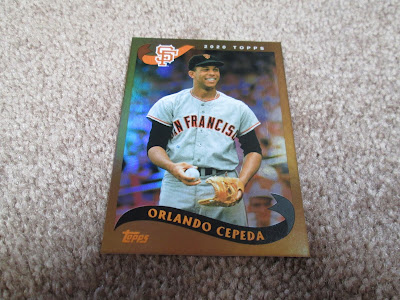 So Pack 2 had my first 'what the hell' moment of the break, with this Cepeda parallel. It's a foil board parallel, numbered to 75 copies, which is already pretty cool. BUT...it's seeded 1 every 265 packs. Meaning this was something resembling a case hit...which is pretty damn cool. AND it's of a Hall of Fame I'm perfectly fine pulling cards of. 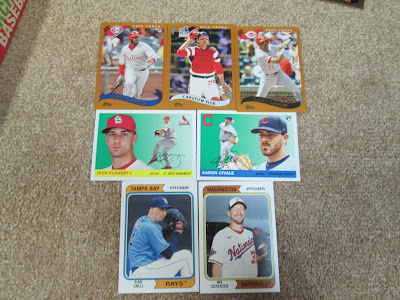 Pack 3-
02s: RYAN HOWARD IN MODERN TOPPS. NOT BAD. Not bad at all. Fisk and Larkin are standard HOF inclusions
55s: Flaherty and Civale. I don't have a ton to say about the 55s, cause it's just sorta there.
74s: Snell's Rays one looks fine. Why go with the Padres colors for the Nats? I know you're trying to remind  us of the "Washington" chase hits from 74T, but the Nats can have their own colors if the Rays do. Jeez. 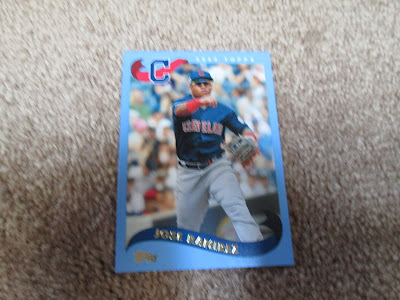 Another cool parallel. This Jose Ramirez is a blue parallel, numbered to 25 copies. I've been pulling a lot of /25 cards lately, so hopefully it doesn't mean that they're less valuable now. Ramirez is not a bad pull for these either.
These are 1:83, so less rare than the foilboards? Interesting. 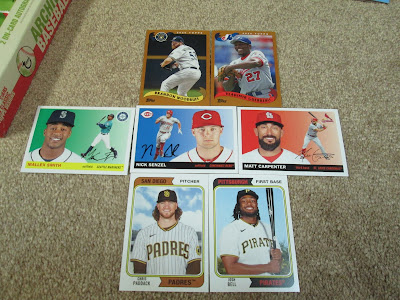 Pack 4-
02s: Vlad fits in this design, because of course he does.
55s: Should Mallex Smith be in this set?? He's just been optioned.
74s: The new Padres uniforms look good here. Bucs cards have red lettering, which is bad. 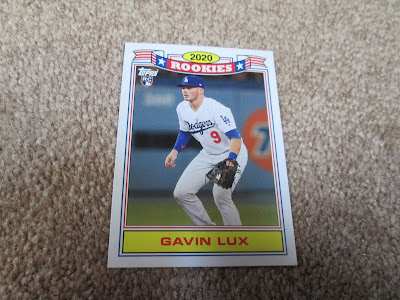 This lux is a 1990 Rookies insert, which come 1 per hobby box, so that's a cool hit there. 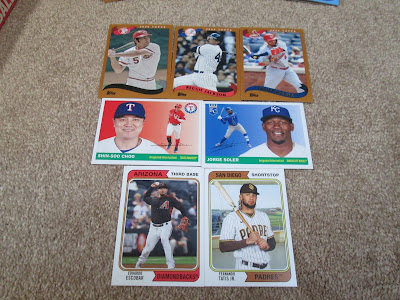 Pack 5-
02s: Bench, Reggie, Yadi. Yadi's a future HOFer, so this is a good grouping.
55s: Two mega-hitters. They look good here.
74s: D-Backs design here is...fine, but looks slightly weird. Good I pulled the Tatis rather than having to overpay for it. 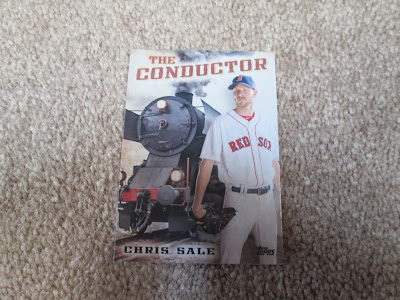 We now see this poster in card form, where it still looks awesome, and Sale does fit well here. These are the 1st 15 short printed base cards, so I've gotta grab 'em all, and they only fall 4 per hobby box. 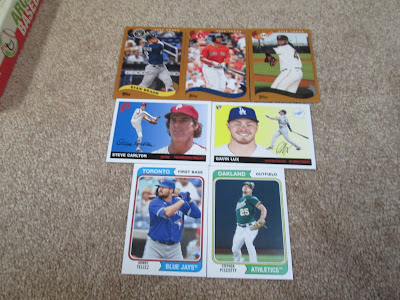 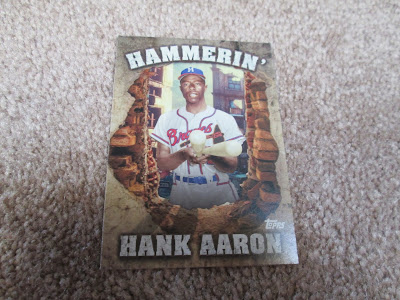 My second poster SP is of, of course, Hammerin' Hank. This one's cool, but hampered by the lack of authentic photo choice. 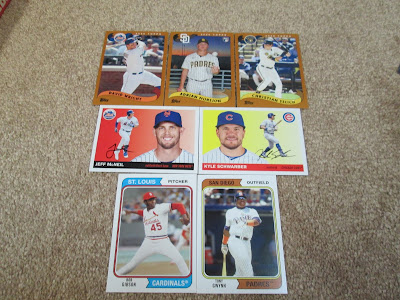 Pack 7:
02s: I think it's genuinely cool that David Wright has a card in this set. Also, nice to have the Yelich
55s: Yeah, these two are fine
74s: Gibson's actually works in this design because  the photo likeness is good. Gwynn...is a Gwynn card. So I like it. 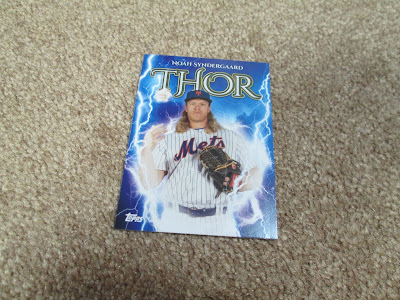 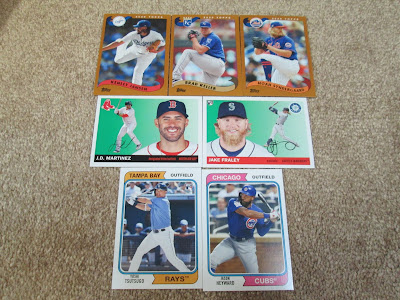 Pack 8-
02s: Jansen, Keller, Thor making a victory lap
55s: I see Topps also got the bad info that Jake Fraley would be starting in the majors.
74s: YOSHI! 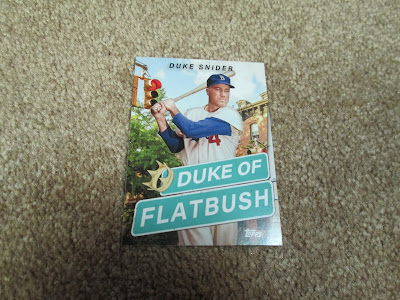 I also adore this one. Yes, again the photo's not natural, but...the nickname pops. It's very Brooklyn, and very kind to baseball history. So I guess I'm happy with my 4 SPs. 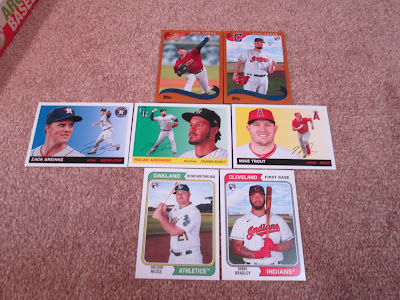 Pack 9-
02s: ANDY PETTITTE AS AN ASTRO? WOW.
55s: Greinke's feels very 04 Heritage. Maybe cause he was around back then. Arenado and Trout are great  pulls.
74s: Rookie unknowns. 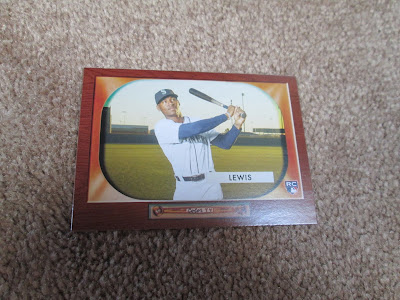 Another of my three 55 Bowmans this box. K-Lew, as he's burning  down the league this year, is a nice pull. 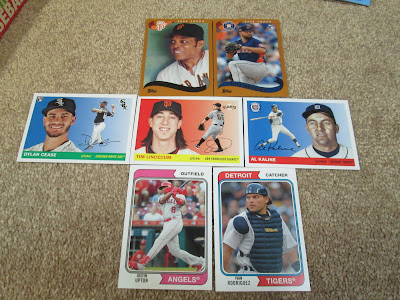 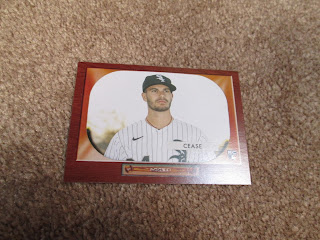 And my last 55 Bowman is of, you guessed it, Dylan Cease. 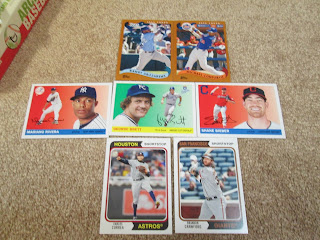 Pack 11-
02s: Not much to say about these two, except I'm sad the Mets had to postpone their sweeping for a bit.
55s: Two HOFers and a future Cy Young  winner. Not bad.
74s: Two shortstops. 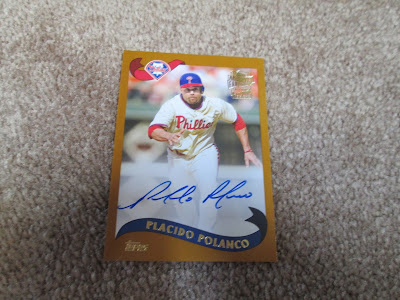 First of all, I like this as a Phillies fan who watched Polanco play, and watched him excel for us on  two separate occasions. I also like this because it's clear Polanco is in 2010-era Phils colors, so this is from his  second tenure, with a bit more postseason success. And, really...it's an on-card auto of a Phillie I've seen play. So I'm down with Placido Polanco here. 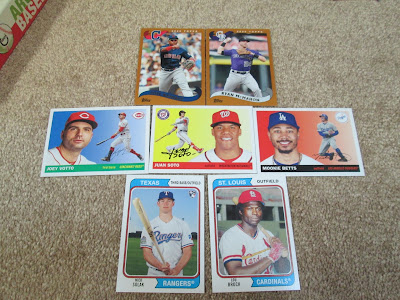 And...we also get our second and last hit here: 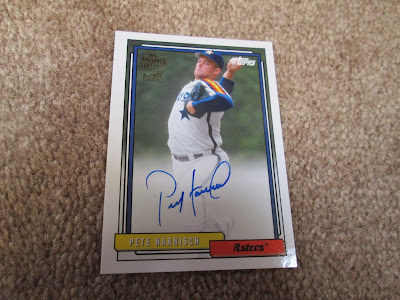 Pete Harnisch isn't as good as Placido Polanco for me, but he's still one of the three huge pieces of the Glenn Davis deal, he's still a great, consistent 90s pitcher, and it's still an on-card auto of someone who was good at baseball for a while. Last year I pulled one of Rick Honeycutt out of retail, and this feels a bit like that. Heard of him, decent pull, but dwarfed by Polanco for me.

With both hits out of the way, that leaves more base, inserts and SPs for the second half, and that'll be up within the next few days.
Posted by Jordan at 10:25 AM
Labels: 2020, Archives, box break, Product Review, Topps