A Yastrzemski Hitting Over .300? Been There. 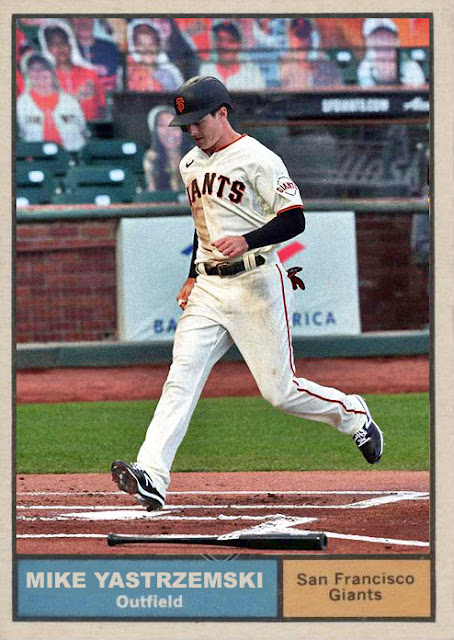 Caught this guy playing for Norfolk a few years ago. It was at the point where he was in his mid-20s and it looked like he'd just be a career minor leaguer, so my dad and I just enjoyed the novelty of seeing Carl Yastrzemski's grandson  playing ball.

Fortunately, the Giants have continued their uncanny ability to save minor league farmhands from extinction. They did it with  Ryan  Vogelsong back in the day,  they did it with Alex Dickerson last year, they're doing it with  Darin Ruf this year apparently, and...now Mike Yastrzemski is the best player on the Giants. How do they do it?

It's great that Yaz is hitting .300, because the veteran-based lineup the Giants had been going  with is finally beginning to cave in  on  them. Crawford, Sandoval, Pence and Belt are not hitting. Jeff Samardzija is tanking and now injured. Buster Posey isn't even playing this year. The Over-30 strategy has failed for the Giants, and they are pretending it's not. Meanwhile, the younger guys  in the lineup, like Yaz and Austin Slater and Donovan Solano, are doing great. The pitching youth movement is succeeding finally, as Logan Webb has turned into a great starter and Connor Menez is sharp in relief. Hell, some of the younger recent signings, like Wilmer Flores, Kevin Gausman and Tyler Anderson, are working for this team as well. They're just trapped under so many impenetrable contracts.

There's a younger Giants team trying to squeeze through, and there are parts of this team that will, and do, actually work this year. But the reality exists that the Giants will probably have to wait until all of these contracts expire to really make a run at things, and for everyone that's doing well NOW, that's kind of sad.

Coming Tonight: Second-baseman for a team that just reduced  my Yankees to low-scoring.
Posted by Jordan at 11:31 AM
Labels: Custom Cards, Giants, Mike Yastrzemski